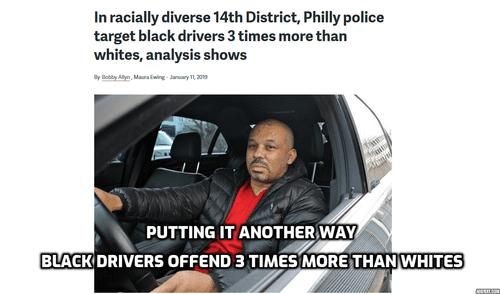 A Reader Has An Observation About Black Drivers And Turn Signals

Re: James Fulford’s article Black Privilege Is Ultimate Cause Of Minnesota Mall Atrocity

From: Colin Wright [Via Unz.com]

‘… In 2002, Heather Mac Donald wrote in City Journal about a New Jersey study that said black drivers speed twice as much as white drivers. …’

Somewhat irrelevantly, that reminds me: blacks never use their turn signals. Okay: when I first noticed this, I started watching, and I have to admit over a period of years I think I did notice one black actually use his turn signal.

The observation fascinates me: what exactly does it say about the attitude of blacks towards the world around them? After all, I signal: aside from disliking tickets, I want other drivers to be aware of my intentions, and I’d just as soon not cause mayhem as I career down the streets. Most other non-blacks signal as well: not invariably, but usually.

So why don’t blacks signal—ever?

James Fulford writes: There's not a lot of research on why blacks don't use their turn signals. (Such research is...discouraged.) Instead there are studies on why they get stopped more than whites.

For example, the story

might just as easily have been headed "In racially diverse 14th District, black drivers offend 3 times more than whites". That seems entirely reasonable.

The same applies to a story that says

...failure to signal is often a handy tool for police to establish a valid reason to pull over a vehicle that they feel is suspicious. A signal violation is a primary offense -- one that legally allows a traffic stop. Police might suspect a driver is drunk, transporting drugs or guilty of any number of other infractions. (See "Do you look like you have insurance? Opens a New Window. ")

That practice can be controversial.

Florida attorney Shane Fischer says that in his experience, failure-to-signal tickets are much more common in poor, predominantly African-American or Latino communities.

Data presented in Chavez v. Illinois State Police, a class-action lawsuit, showed that Hispanics, while less than 3 percent of the driving-age population in one district, made up 25 percent of drivers pulled over in discretionary stops for offenses such as failure to signal a lane change.

Once again, that seems entirely reasonable. The lawyers and lawmakers have a fantasy that everyone acts exactly the same, and if police give more tickets to one group, that's profiling.