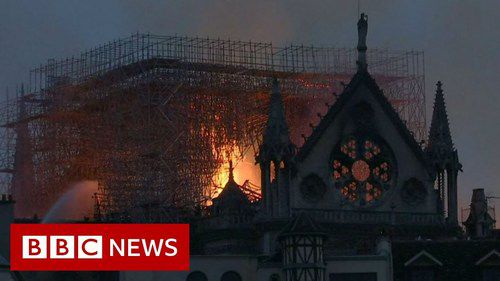 From: Calvin Leicester [Email him] 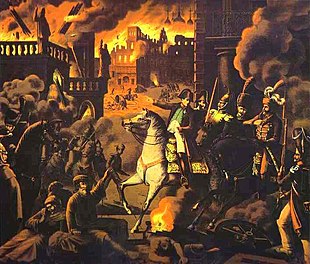 Rostopchin burned Moscow before the French could take it; Chiang Kai-shek’s men did the same to Changsha to pre-empt a gain by Japanese troops.  However heart-rending their choices, these men knew better than to let the enemy enrich himself by plundering the national treasures; better to start anew than surrender their forbears’ bequests to a conquering army.

In the banlieux of Paris, Louis, Henri, and Jacques have flagged on the rosters of baby names.  The most common names include, among others, Mohamed, Ibrahim, and Ayoub.  Paris—arguably the crown jewel of Western man’s patrimony—looks set to be renamed Paribad in a few years’ time, if its occupiers deign even to nod to the ancient tribe from which it draws its name.  Little of this can be news to a regular reader of VDARE.com.

I was shocked to see Notre-Dame burning yesterday—during Holy Week, no less.  It stood the better part of a millennium—through plagues, revolutions, empires, and wars—suffering damage from time to time, but there it loomed; a stern reminder of the animating, beating heart of our civilization—the Universal Church.  And so, as the videos came in and I watched that grand cathedral burn, a wry, mournful smile flickered across my face.

“All of us will rebuild this cathedral together,” announced His Excellency Emmanuel Macron.  That’s my own translation, but I haven’t stretched his words.  He’s announcing a project that will go “well beyond [France’s] own borders.”  He said, “We will rebuild Notre-Dame, because that’s what the French expect; because it is what our history merits; because it is our fundamental destiny.”

And indeed, that’s how he, and so many others, view this building.  It’s an old structure that belongs to “France”; and France, of course, d’après lui, belongs to the world.  I can claim little piety—and much sin—but it takes precious little piety or virtue to know that this is a Christian church, and its demise is that of a Catholic monument to the glory of God.  However much or little meaning the Catholic Church might have to the reader, the Louvre didn’t burn on 15 April 2019—a cathedral did.

Perhaps the gargoyles looked down to the Dardanelles and recoiled at the fate of the Hagia Sofia as they pondered the Ismaëls and Amirs in their own midst.  Or perhaps they didn’t need to look so far—just to the insipid teenagers taking selfies and profaning the holy ground on which Notre-Dame was built.  But perhaps they decided to preempt the indignities they sensed on the horizon.  The enemy had arrived, and they’d be damned if they surrendered Notre-Dame.  The only question that remains is, was the enemy the Arab hordes or France’s own effeminate, resigned sons?

Whatever Emmanuel Macron manages to do with the remains of Notre-Dame, to my mind it’s gone.  I won’t be visiting the One World monument he turns it into.  Apoptosis is a Greek word that, by origin, alludes to the autumn leaves—it describes a cell’s self-destruction to stop itself from poisoning the body it constitutes; here we see apoptosis to deprive the enemy.

I’ll mourn Notre-Dame, but in point of fact, it’s been gone a long time now.  Speaking of the falling leaves apoptosis alludes to, some lyrics to a great song are apropos:

James Fulford writes: The English version of this song is called "Autumn Leaves". The French version, above, is called "Dead Leaves"—more to the point. See also"Fairest Things Have Fleetest Endings"—Jared Taylor's review of Camp Of The Saints.