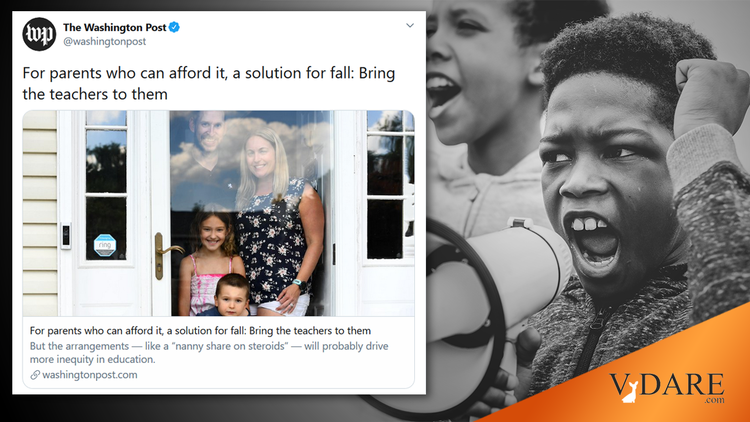 From: An Anonymous Legal Professional  [Email him]

Self-organizing parents concerned about letting their children go back to schools in the age of the China Virus are thinking of organizing "pandemic school pods" bringing the teachers to the children.

For parents who can afford it, a solution for fall: Bring the teachers to them https://t.co/4ZZl0Q7TEA

Interesting idea, but it's inherently racist because it appeals to smart, literate, motivated people (as opposed to Keisha Lance Bottoms, London Breed, Muriel Bowser, Lori Lightfoot, LaToya Cantrell, Kamala Harris, Danielle Outlaw, Stacey Abrams, and Carmen Best). The litmus test: If it does not bestow more benefits on "people of color" than whites, it's racist.

1. The DNC will assign 500 SJW attorneys to destroy the legality of home schooling as systemic racism, based on disparate results (white children educated by their parents are arrested less frequently than gang-bangers of color).

2. The DNC will attack the pod plan since a paid tutor in your home is not a "home school", and must meet the same requirements as a private school (certification, inspection, zoning, licenses, insurance). They will win this one eventually, despite the poor quality of legal expertise they've demonstrated so far. A Temporary Restraining Order will appear instantly to prevent any implementation of a pod variant... until they win.

3. When "pod school" does not equal "home school," children opting out will be subject to fail promotion and criminal prosecution of the parents: Education is compulsory.

4. A pre-emptive strike against the entrenched masses of perpetual outrage (by inviting a black child into the pod) cannot reduce unconscious white racism, but it does introduce a non COVID-compliant child with a far greater propensity toward violence than your own child. How would you expel little Le'Maricus McMcMickins after he breaks your daughter's nose?

Wake up—this is happening faster than you can react.