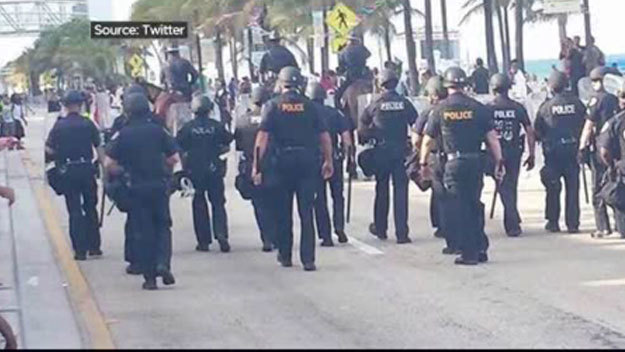 Fort Lauderdale Flash Mob A Masterpiece Of Not Noticing

My friend Eustace (not his real name, or even close) down in the Peninsular State told me his wife drove through this fracas with their infant child in the car.

Fort Lauderdale police believe hundreds of young people made their way to the beach for one reason this Memorial Day, to cause trouble. Police described a volatile scene Monday night as they had to arrest dozens of people that were part of unruly crowds . . .

Police said around 5 o’clock in the afternoon, hundreds of young people made their way to the beach for one reason this Memorial Day, to cause trouble. Fort Lauderdale Police were in riot gear as a large crowd of young people moved through A1A reportedly causing mayhem.

Fort Lauderdale Police officials said a group of young people came to the beach to fight and when police quickly broke it up, they scattered through the streets . . .  [Police Arrest Dozens During Memorial Day Ruckus By The Beach, by Carey Codd; CBS Miami, May 26th]

Eustace tells me his Missus was thinking the whole time about my "Talk" column.

He then added: "There is, of course, no mention of the singular, conspicuous characteristic of the 'unruly crowd'."

Why, Eustace, I don't understand. The descriptions seem perfectly clear to me. I actually tallied them all:

You can't get more specific than that!

Not in the United States of Not Noticing, you can't.