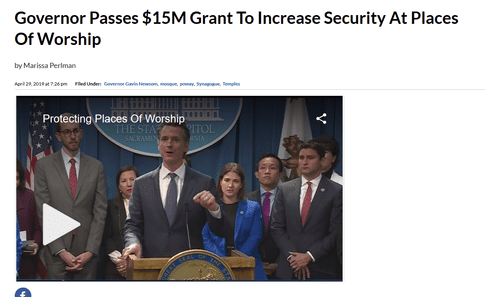 A California Reader Reports That Gov. Newsom Wants To Protect Mosques, And Synagogues, But Didn'Mention Churches

After Saturday’s SoCal synagogue shooter killed one woman, California Gov. Gavin Newsom announced Monday that State taxpayers will spend $15 million to improve facilities and security at private “soft target” houses of worship, specifically “mosques, for synagogues, for other institutions. "Churches be damned. Newsom, nephew of House Speaker Nancy Pelosi, apparently doesn’t view Christians as “soft targets” despite Easter Sunday attacks upon Sri Lankan churches and Nigerian village slaughters that have killed more than 500 Christians since March. Is it time to demand “separation of synagogue (or mosque) and State”, or does that only apply to "church and State," Guv?

Gov. Gavin Newsom vowed on Monday to spend $15 million for increased security at "soft targets" like the synagogue where a gunman opened fire over the weekend, killing one worshipper.

He said he will include the money in his $144 billion general fund budget proposal, which he intends to revise by the middle of May.

The California Legislative Jewish Caucus had requested it, calling for a 30-fold increase in a state program that last year spent $500,000 on grants to nonprofits organizations vulnerable to hate crimes.

"It was self-evident, the need to do more," Newsom told reporters. "That money pales in comparison to the need for mosques, for synagogues, for other institutions."