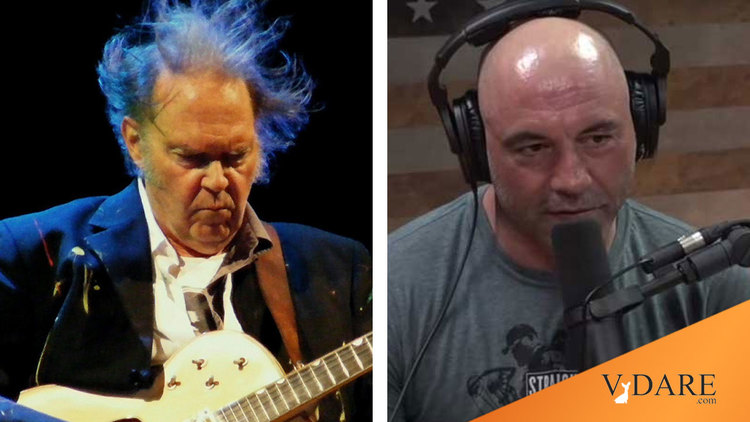 Earlier: "Is This A Sovereign Nation / Or Just A Police State?" Eric Clapton, COVID, And Immigration

Elderly rock star Neil Young is back in the news for beefing with podcaster Joe Rogen over vaccines. (Young had polio as a child and is a big supporter of vaccines.) That gives me a topical excuse to post a review I wrote for the first ever issue of the American Conservative:

Of all the veteran rock stars featured at last September’s post-9/11 telethon “America: A Tribute to Heroes,” Neil Young earned the highest praise from critics by squeaking out John Lennon’s defeatist “Imagine” (“Imagine there’s no countries … Nothing to kill or die for”). In contrast, Tom Petty, with his long gray-blonde beard making him look like some crazed old Johnny Reb who had been holed up in the Blue Ridge Mountains surviving on raw squirrel meat ever since Appomattox, delivered a defiant version of his song “I Won’t Back Down”—and was roasted by the reviewers for his insensitive pro-Americanism.

Yet, Young (who is still a Canadian citizen but views himself as an American) seemed to grasp that Petty had been on the right track. Outside the entertainment establishment, few Americans were so out of touch with common sense and basic human emotions as to desire a return to old-fashioned anti-war songs of the tin-soldiers-and-Nixon-coming ilk that Young had performed with Crosby, Stills and Nash.

In December, Young quietly released “Let’s Roll,” the first patriotic ode to the businessmen-warriors of Flight 93. Unfortunately, it wasn’t a great piece of music, but it showed that the 57-year-old Young was more in touch with how Americans felt than almost anybody else in the music industry. For someone who had enjoyed his first hit, Buffalo Springfield’s insidious “Mr. Soul,” back in 1968, simply avoiding irrelevancy was no small accomplishment. 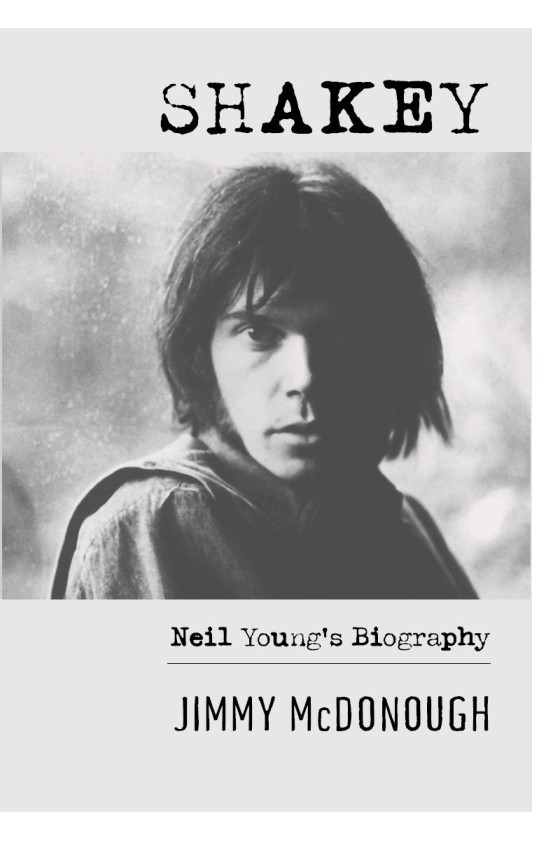 At 788 pages, Jimmy McDonough’s Shakey: Neil Young’s Biography may teach the non-fanatical reader more about Neil Young than he cares to know. Still, compared to other doorstop biographies, it’s a reasonably quick and interesting read. Despite Young’s ample abuse of cocaine, marijuana, and alcohol during the 1970’s, he’s still in full possession of a lively and cantankerous intelligence.

The book’s vast heapings of facts are especially necessary because the author never quite grasps who Young really is. After spending six years hanging around with his hero and four more writing it up, McDonough, a rock idealist, concludes perplexedly, “Young was an unsolved mystery, hermetically sealed.” Fortunately, the author accumulates enough data to allow his more worldly readers to put together a coherent portrait of Young and, perhaps, come to like him better as a man.

Young’s transformation from “Imagine” to “Let’s Roll” shocked many, but it’s never been hard for Young to change. He has run through as many personas as Madonna has: folkie (back before “folk” implied “lesbian”), granola head, drug-doomed decadent, new wave Devo-wannabe, country singer, Blues Brother clone, and grunge godfather. He’d showed his rebellious streak by publicly backing Ronald Reagan for a few years.

The first record I ever bought was Young’s 1969 “Cinnamon Girl,” a plodding but thunderous slab of lowbrow garage metal. I still turn it up whenever it comes on the radio.

The next year, though, Young released the song I most love to hate, the piano and French horn ballad “After the Goldrush,” a recording that the hippie era has yet to live down. Young’s ludicrous lyrics (“Flying Mother Nature’s silver seed to a new home in the sun”) and whiny vocal would have been easy to dismiss except for the catchy folk melody that twined like kudzu around my brain.

Unlike Madonna, though, Young seldom changes to stay current. In fact, he often seems gloriously oblivious to post-1960s music. In his most famous lyrics from 1979’s powerhouse “Rust Never Sleeps” album — “It’s better to burn out than to fade away … / The king is gone but he’s not forgotten / This is the story of a Johnny Rotten” — Young ignorantly confused the Sex Pistols’ recently dead bassist Sid Vicious with Johnny Rotten, their very much living (and highly annoyed) singer.

When he’s making an album, Young holes up on his three square mile ranch near Santa Cruz with various rock and roll fossils such Crazy Horse, the notoriously inept backup band that has been furnishing Young’s electric guitar records with thudding, funkless, undanceable rhythms for the last 30 years.

Young is a sort of passive-aggressive Little Napoleon who either dominates everyone around him, or leaves. Crosby, Stills and Nash were the most popular band in America before Young joined, but Young immediately called the tunes — even though he was manifestly putting most of his effort into his solo career. “As soon as they started to rehearse,” recounts Young’s business manager, “It was clear Neil was gonna be in charge. Everyone was afraid of Neil. Because Neil walked.”

Young prefers working with mediocre musicians like Crazy Horse who can’t afford to walk out on him. One of Young’s producers observed, “He doesn’t wanna play with really good musicians because they’ll bust him. Because he’s not an amazing musician — he’s just an amazing force. So, it’s always safe with guys that are less than you — you just tell ’em what to do and you know they’ll do it.”

During his Capitol Records apogee of 1953-1961, Frank Sinatra had naturally made use of the best sidemen, composers, lyricists, and arranger in the business. A few years later, though, Bob Dylan introduced the pop music version of the auteur theory, the assumption that the do-it-all singer-composer-lyricist-guitarist inevitably created more emotionally authentic music than specialists who each did one thing extremely well. Young’s broad but not infinitely deep set of talents was perfectly suited to make him Dylan’s most prominent disciple. Most importantly, since almost nobody is actually gifted enough to do all these jobs terribly well, Young had the requisite masculine self-assurance to ignore the skeptics who pointed out that the emperor had no voice. That Young had willed himself to become a famous singer despite his fingernails-on-a-blackboard pipes just showed his fans that he truly had concrete cojones. In the rock era, music became ever more of a “testostocracy” ruled not by the most talented, but by the most aggressive and self-convinced.

The secret to Young’s career longevity appears to be that his health has steadily improved with age. Today, the superior physical and mental constitution he inherited from his mother Rassy, a tomboy champion amateur golfer, and his sportswriter father Scott, hard-working author of 30 books, is no longer dragged down by the polio, epilepsy, and drug abuse of his younger years. He now lifts weights, works out aerobically, and plays a lot of golf. Of course, some might argue that after hoovering up all that cocaine before his second marriage in 1978, a naturally robust individual like Young sends the wrong message about the danger of drugs to the mediocre masses simply by not being dead by now.

Young became obsessed with model trains when he discovered they were one of the few toys that his quadriplegic son Ben could play by pushing a button with his forehead. Young soon became an important technological innovator in the model train industry, delivering breakthroughs in realistic locomotive sounds. He bought a stake in the venerable manufacturer Lionel. Unfortunately, the book ends before the sad day in 2001 when Lionel moved its factory to South Korea, laying off 325 unionized workers. Young’s most consistent political cause has been the protection of the jobs of Americans who work with their hands. So, it’s too bad we never learn the inside story of what must have been a wrenching time for Young in his dual roles as an owner and a union-supporter.

Shakey reveals that today Young lives a secret life of surprising normality, just like thousands of other successful ex-hippie entrepreneurs in Northern California. Young spends many of his days managing his Silicon Valley research and development lab; videoconferencing with his fellow Lionel executives; marketing his wares at toy industry conventions; playing golf; and coming home to his wife of 24 years. Young takes pride in his corporate skills. In the climactic chapter, Young taunts his baffled biographer, “Look around me — I’m a f—–‘ capitalist businessman! … I’m a good businessman, right?”

Young’s emerging bourgeois virtues seem to disillusion poor McDonough. He probably would have been happier writing about a true tormented genius, such as Kurt Cobain of Nirvana. Cobain, the last great rock star, was the grunge version of the 19th Century Romantic bohemian artist starving in a Parisian garret while swigging down absinthe to dull his tubercular pains. Similarly, just two weeks before the 1991 release of Nirvana’s landmark album “Nevermind,” the sickly, drug-ravaged, but inspired Cobain was sleeping in the backseat of his Plymouth Valiant.

In contrast, when the boys in Buffalo Springfield were negotiating their first record deal in 1966, the 21-year-old Young, newly arrived in L.A. from Canada, had one final request for famed music executive Ahmet Ertegun, “I’m a golfer. Can you get me in a country club out here?”

Just before blowing his brains out in 1994, the 27-year-old Cobain included Young’s line “It’s better to burn out than to fade away” in his suicide note. Young, of course, has neither burnt out nor faded away, making some of his best music around the time of Cobain’s death, when Young was nearly fifty. While Young’s 2002 album “Are You Passionate?” is nothing special, it’s better rock music than anybody back in 1966 imagined a 57-year-old could ever make.

The odds are that this time Young has finally entered the decline phase of his career. Then again, he’s surprised us many times before.

Compare Neil Young to another electric folkie of the same vintage, Donovan, who had a few years of big hits in the late sixties but has been almost unseen for the half century since.