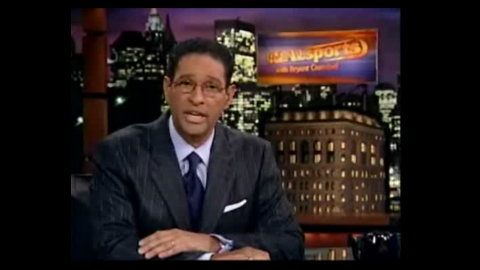 Winter Races—And The Races Of Man

"So try not to laugh when someone says these are the world's greatest athletes, despite a paucity of blacks that makes the Winter Games look like a GOP convention."–Bryant Gumbel on HBO's Real Sports

His crime: Mentioning that black players tend to be faster than white players.

But newscaster Gumbel's statement, quoted above, has been met with little outcry, so far.

Well, unlike DeBerry, Gumbel is black. Everyone already knows he's less of a fan of white men than he is of white women, such as the blonde trophy wife for whom he traded in his black first wife of 26 years.

And everybody knows these periodic "two minute hates" directed by white sportswriters at white sportsmen too old fashioned to avoid blurting out the truth have very little to do with blacks, per se. This is just a white-on-white war over status. Blacks are free to say whatever they feel like because white journalists seldom consider them rivals.

Predictably, sportswriters are already playing up the 1000 meter speedskating gold medal won by the African-American Shani Davis as an epochal social breakthrough, one that will finally unleash the cleansing power of diversity on the white bread Winter Olympics.

It won't. The truth is that African-Americans' sporting interests have been getting less diverse, as they focus ever more on their strong suits, basketball and football.

For example, when Tiger Woods, who is one-quarter black, won the Masters nine years ago, it was widely predicted that blacks would soon flood the ranks of pro golf.

Instead, the opposite has happened. Between 1964 and 1986, five black pros (Pete Brown, Charlie Sifford, Lee Elder, Calvin Peete and Jim Thorpe) won a total of 23 PGA tournaments. But in the 20 years since, no black other than Woods has won.

Similarly, Arthur Ashe won the U.S. Open tennis tournament 38 years ago. But no African-American man has won a major championship since him.

And Wendell Scott, a black driver, won a NASCAR stock car race back in 1963. But African-American interest in motor sports is minimal today.

The African-American share of major league baseball rosters has fallen from 27 percent in 1974 to 9 percent last year. Last fall, home run king Hank Aaron criticized the Houston Astros for having no African-American players. (But that black lack didn't stop the team from winning the National League pennant.)

And they will develop institutions to allow them to do so.

For instance, the middle of February was traditionally the deadest time of the year in sports. But today, Sunday, February 19, was full of events that have turned into de facto ethnic pride celebrations.

The NBA All-Star game is instantly forgettable as a basketball contest, with both teams going up and down and up and down the court scoring at will, with any attempt at playing defense being considered an intolerable faux pas. But as a weekend, the NBA All-Star game has turned into the most glamorous date on the calendar for well-heeled African-Americans, who fly in by the thousands to whichever city is hosting it.

The Daytona 500, NASCAR's biggest race, also often baffles the uninitiated who tune in and can't quite figure out the appeal of watching stock cars go around and around and around … and around some more. But NASCAR's huge popularity owes much to having evolved into a covert ethnic pride extravaganza for one of the few groups who aren't allowed to honor themselves in public: Red State whites of Northern European descent.

The Winter Olympics… its fans are indeed, as Bryant Gumbel noted,  largely limited to Europeans north of the Mediterranean climatic zone, and to their cultural clones in North America (especially in Canada and America's Blue States, which tend to be snowier) and Northeast Asia.

These demographic facts so outraged Washington Post staffer Paul Farhi that he wrote an op-ed denouncing the Winter Olympics as the cynosure of "elitism, exclusion and the triumph of the world's sporting haves over its have nots… the preserve of a narrow, generally wealthy, predominantly Caucasian collection of athletes and nations." [Where the Rich and Elite Meet to Compete, February 5, 2006.]

But I think something more profound is going on.

With the exceptions of ice hockey, figure skating, and this new downhill demolition derby called snowboardcross, the Winter Olympics consists of events that aren't really good enough spectator sports to be endured more than once every four years.

Many require admirable levels of precision, discipline, and courage. But those virtues don't necessarily televise well. It's slippery out there and catastrophes could ensue if athletes competed directly, so only one person or team goes at a time. The play-by-plays tend to sound like this:

Watching at home, it all looks like a blur. But that's the appeal to the competitors—disentangling what actually happened and making precise adjustments under terrifying pressure. After each run, the team studies replays of the race in slow motion until they figure out that the reason Gunther was 0.06 seconds slower than expected was because in Turn 8 he bent his left ankle at 45 degrees instead of 60 degrees.

In general, there is a paradoxical positive correlation between how repetitious a sport is and the educational level of its enthusiasts. Sports where athletes make subtle adjustments in technique as they do the same thing over and over appeal more to higher IQ people.

Rowing, for instance, is popular in Cambridge, Massachusetts and Cambridge, England, but in not too many other places.

In contrast, sports where competitors have to make non-stop decisions like basketball, boxing, and soccer appeal strongly to people at lower levels of the educational ladder.

Winter Olympics events like the bobsled and luge are the kind of sports that appeal to the nerdier mind. The nerds get pushed around by the basketball and football players in high school—but in the long run, we're all dependent on the technological inventiveness of our nerds.

Perhaps it's just a malign coincidence that expensive sports requiring technical obsessiveness, like many of the Winter Olympic events, flourish most in the technically advanced societies that can afford them.

But then, that just raises the question of why the Ice People (to use the terminology of CUNY Black Studies professor Leonard Jeffries) are so much more economically productive than the Sun People.

Don't expect this question to be explored in the Washington Post any time soon.

That's what VDARE.COM is for!