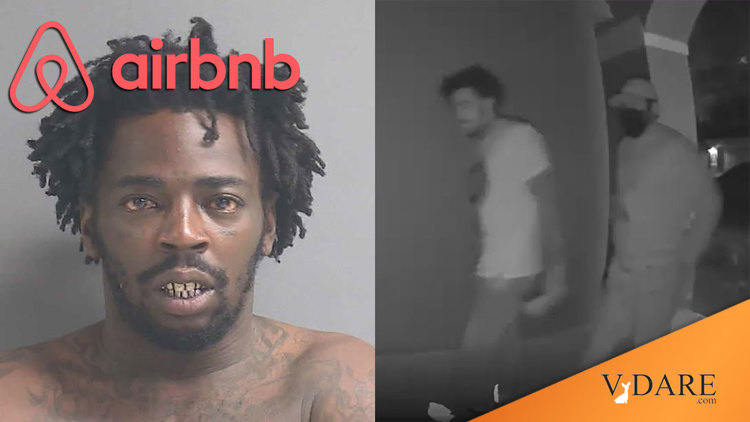 Earlier: Michelle Malkin: Why Airbnb Banned Me (And My Hubby, Too!)

[Donate to Michelle's lawsuit against Airbnb at https://fundly.com/michellefightsairbnb]

Those bloody local news headlines in Pennsylvania, Florida and Utah last week once again expose the ongoing farce of Big Tech's "trust and safety" theater. Across America and around the world, violent thugs and rapists, hidden-camera creeps, human and drug traffickers, and wily scammers have hijacked Airbnb rental homes for criminal and nefarious purposes. Yet, it's peaceful, law-abiding and right-thinking families like mine who've been publicly smeared, persecuted, kicked off the online home rental platform and branded "extremist" security threats by vengeful gatekeepers at Airbnb.

This persecution of America First conservatives is openly aided and abetted by left-wing witch-hunters at the Southern Poverty Law Center, Anti-Defamation League and The Daily Beast who despise what we believe, who we call family and friends, and to whom we speak. In broke Woke America, patriots are the criminal class and criminals are the protected class.

Over the weekend, 200 partygoers in Pittsburgh descended on an Airbnb property before a gunman murdered two teens and wounded 11 others. The San Francisco–based $40 billion "worldwide lodging juggernaut" announced plans to sue the renter for violating its terms of service. This is Public Relations Deflection and Distraction 101. What doesn't this Trump-hating, open-borders promoting, illegal alien-employing globalist vacation rental platform want you to know about its own culpability in facilitating criminal safe havens?

Airbnb (which I will henceforth refer to as Nightmarebnb) touts its myriad "trust and safety" measures, including "risk scoring" of every reservation using "predictive analytics and machine learning to instantly evaluate hundreds of signals that help us flag and investigate suspicious activity before it happens"; "watchlist and background checks" of hosts and guests; and "safety workshops" and "scam prevention" tools to provide "a multi-layer defense strategy."

Since 2016, when Donald Trump became president, Nightmarebnb has very publicly and zealously employed its vetting tools to purge the accounts of pro-America nationalists (like brown-skinned me and my private family members) who are tarred as "white supremacists" by the Southern Poverty Law Center. That's the same lie machine whose reckless designation of the conservative Family Research Council as a "hate group" inspired convicted gunman Floyd Corkins to break into its Washington, D.C., office to try to kill "as many people as possible." Despite settling a defamation lawsuit by the Family Research Council for $3.4 million, the Southern Poverty Law Center slimeballs continue to be primary research sources for media, tech companies, the government and Nightmarebnb's secret thought police goon squad.

Just like the Clinton, Obama and Biden administrations, Nightmarebnb CEO Brian Chesky and his minions devote enormous time and resources to perpetuating the perniciously false narrative that "racism" and "lack of diversity" are the biggest safety and security scourges plaguing our country and their business. Meanwhile, the company employs a secret "black box" team of ex-military officials, crisis management operatives, and former top Clinton and Obama White House staffers that reportedly pays out $50 million a year to cover up rapes, murders and other grisly crimes committed in Nightmarebnb rentals around the globe. Crime victims are wined, dined and paid off with massive settlements—then gagged from discussing their cases.

Nightmarebnb's ruthless whitewashing of violence, sexual assaults, and human and drug trafficking should be the subject of congressional and law enforcement investigations worldwide—especially as its woke leaders throw open their doors to hundreds of thousands of unvetted refugees from Afghanistan, Ukraine and elsewhere. Instead, the powers that be cower, cackle or conspire in the cover-up.

As for me, on behalf of my family, I am pressing forward with my own lonely battle to hold Nightmarebnb accountable for defying anti-discrimination laws and retaliating against my journalism and political activism. Deepest thanks to the kind supporters who've offered to host us on our travels and to the 825 donors who've supported my crowdfunding campaign to take legal action against the woke smear merchants (go to https://fundly.com/michellefightsairbnb to donate).

Trust and safety might not be such bad jokes if more Americans cared about the plight of their fellow citizens who've become political refugees in their own homeland while a flood of scumbags take over their neighborhoods in the name of "inclusion" and "diversity."