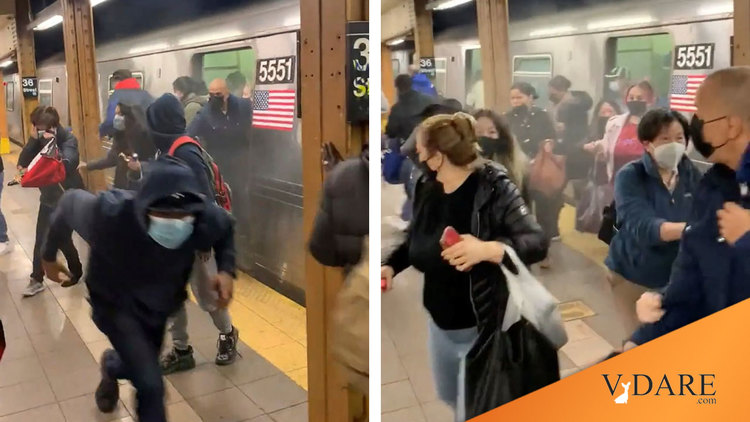 The black suspect in today’s shooting at a subway station in Brooklyn, New York, is still at large.

Yet two major conservative news sites, Breitbart and National Review, are still not reporting his race.

Breitbart put it this way:

Police are searching for the attacker, who is described as being “5 feet 5 inches tall and 180 pounds…[and] wearing a gas mask and an orange construction vest.”

Police are still searching through the subway platforms for the suspect, who they said they believed to be a man standing about 5 feet 5 inches tall and weighing somewhere around 180 pounds.

NYPD’s police commissioner, Keechant Sewell, told the truth. He had to.

The suspect is a Black male, who was wearing a green construction vest & a gray hooded sweatshirt.

We need the public’s help apprehending the individual responsible for shooting multiple people today on the subway in #Brooklyn. The suspect is a Black male, who was wearing a green construction vest & a gray hooded sweatshirt. Call @NYPDTips at #800577TIPS with any information. pic.twitter.com/d2wTfNbMDD

Amusingly, as VDARE noted in its retweet of Ann Coulter, the New York Post removed the suspect’s race— BLACK—from its description.

The description—"a 5-foot-5 black man, around 170 pounds wearing an orange vest and gas mask"—is still in @nypost quoting stories and tweets. They didn't leave out the description, they TOOK it out. https://t.co/CTLgB18y4l

As we have observed before, when the media don’t report the race of a suspect, they are reporting his race.

Here’s why: they have repeatedly said that reporting race reinforces negative stereotypes about blacks. As well, the media often disclose the suspect’s race if he is white.

Thus, by not reporting race, readers and viewers will assume he is black.

NRO cucked on the race question a long time ago. Breitbart has a reputation for hitting hard on black crime and published Colin Flaherty.

That reputation is now in question.