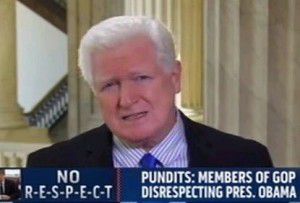 White Democrat James Moran Attacks Black Republican Allen West For Not Being Black Enough—Which One Is The “Self-Hater”?

Congressman Jim Moran is an old white Democrat from Virginia who thinks he can judge whether we minority conservatives are acting sufficiently non-white. Moran's an inveterate bully, a brawler, a crook and a bigot. And not one of his civility-preaching liberal colleagues has the courage to call him out.

Responding on cable news to GOP Rep. Allen West's blunt criticisms of President Obama this week, Moran derided the retired U.S. Army colonel, who is black, as "not representative of the African-American community." Moran then launched into the kind of tired race-traitor tirade I've heard from progressives of pallor for more than 20 years.

How dare we "people of color" stray from the left's ideological plantation? If we choose personal responsibility over entitlement, capitalism over statism or self-determination over identity politics, presumptuous white liberals appoint themselves spokespeople for our forefathers and deciders of our true destinies.

To wit: Lt. Col. West "just seems clueless now that he has climbed aboard ship," Moran fumed. "He's climbed this ladder of opportunity that was constructed by so many of his ancestors' sweat, sacrifice, blood, you know, they did everything they could for his generation to be successful. But now that he's climbed on board ship, instead of reaching down and steadying the ladder, he wants to push it off."

West, his father, his mother and his brother all dedicated their lives to military service; four consecutive generations of his family served in the U.S. armed forces. As a freshman congressman, West's message has been a compelling agenda of self-empowerment. For this, he is savaged by a House colleague as a racial saboteur?

But Moran was just warming up. Next, he contrasted conservative West with big-government savior Barack Obama, who he said acted in proper accordance with his ancestors "by reducing college tuition and training our workers, trying to get a decent job for everybody" and leaving a "constructive legacy."

Er, how's the savior's near double-digit unemployment, record food stamp enrollment, re-inflation of the housing and higher-education bubbles, and massive redistribution of wealth from the working class to the Wall Street bundler class working out for you?

Moran hailed Obama as "our Lion King" and compared his Republican detractors to the "hyenas in the background trying to cause trouble" for the White House. This bumbling chief of political correctness apparently is unaware that those hyenas in the Disney movie have been criticized for perpetuating negative stereotypes about blacks and Hispanics. Dog-whistle politics, anyone?

Do Moran's constituents in Virginia's 8th district support his incessant race-baiting? Last year, he accused Tea Party activists of racism for sweeping out entrenched Democrats in the November 2010 midterm elections. It "happened for the same reason the Civil War happened in the United States. It happened because the Southern states, the slaveholding states, didn't want to see a president who was opposed to slavery," he ranted to Arabic-language television network Alhurra. "(A) lot of people in the United States don't want to be governed by an African-American, particularly one who is liberal, who wants to spend money and who wants to reach out to include everyone in our society."

Yet, only two short years before, this hopelessly racist nation put Obama in the Oval Office with a landslide victory. Logic never was the demagogue's strong suit.

The aptly named Moran, an 11-term incumbent, continues to be rewarded by voters for his extravagant spending habits, self-dealing and diarrhea of the mouth. As I've reported previously: