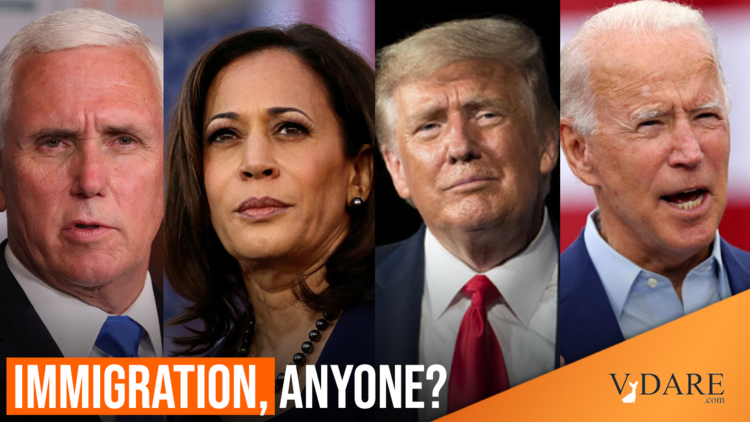 “Whatever Happened To Immigration?” If Neocon Matthew Continetti Has Noticed, Why Hasn’t The Trump Campaign?

Whatever happened to immigration? It’s not just VDARE.com asking: neocon Matthew Continetti just raised exactly the same question in a powerful Washington Free Beacon column [Whatever Happened to Immigration?, October 9, 2020]. The moderators at the Trump-Biden and Pence-Harris debates asked not a question about it. But Rush Limbaugh, during his radio rally with Trump, did discuss it at length and there are some signs Trump might be waking up. Still, time is running out for him to make immigration the decisive issue it was in 2016.

“It was immigration that triggered the grassroots rebellion against the George W. Bush and Barack Obama administrations, and against congressional supporters of amnesty for illegal immigrants, culminating in Trump's 2016 primary victory,” Continetti wrote. (Incredibly, he is Never-Trumper Bill Kristol’s son-in-law, but has consistently been sensible about immigration.)

The same day, Limbaugh reminded Trump that the debates ignored immigration and gun control that are  “strong areas of yours where the American people are with you by a massive majority support number.”

Of course, Trump agreed, and discussed chain migration and Open Borders. Also last week, he tweeted about his immigration moratorium and roasted Harris in an interview: “She wants to open up the borders to allow killers and murderers and rapists to pour into our country,” he said [Donald Trump Says Kamala Harris Is a 'Communist' and a 'Monster' Who Wants to Open Up Borders, by Katharine Fung, Newsweek, October 8, 2020].

My highly regarded Executive Order protected 525,000 American jobs during the height of the Chinese Plague. Democrats want to have Open Borders!

Fair enough. But Trump must do much more, and a review of his bout with Sundown Joe, and Pence’s with Willie Brown’s ex, shows why. The only matter even remotely connected to immigration during the debates was Trump’s ban on travel from China after the Flu Manchu hit the U.S.

“If we would’ve listened to you, the country would have been left wide open, millions of people would have died, not 200,000,” Trump shot back at Joe Biden. The president also mocked Biden for calling the China travel ban “xenophobic” and “racist.”

Trump did what no other American president had ever done. He suspended all travel from China. … Biden opposed that decision. He said it was xenophobic and hysterical. But I can tell you, having led the white house coronavirus task force, that that decision alone by President Trump bought us invaluable time to stand up the greatest national mobilization since World War Two.

Those were solid lines that resonate with Americans. The message: Biden’s party is so committed to Open Borders to bring in new Democrat voters it would refuse to protect our citizens from foreign diseases [Yes, Biden Called Trump’s Travel Restrictions Xenophobic, by Isaac Schorr, National Review, September 14, 2020].

Mistake was, neither Trump nor Pence wounded their opponents by forcing their hands on e.g., the Democrats’ plans to increase immigration, or the president’s temporary immigration moratorium.

Granted, the moderators, Chris Wallace for Fox News and Susan Page for USA Today, are to blame for not asking questions about immigration. And that wasn’t likely an inadvertent oversight: the Main Stream Media is quite simply on the Democrats’ side, and immigration is an issue they want to avoid. As Democratic strategist David Shor has explained frankly:

Non-college-educated whites, on average, have very conservative views on immigration, and generally conservative racial attitudes. But they have center-left views on economics; they support universal health care and minimum-wage increases. So I think Democrats need to talk about the issues they are with us on, and try really hard not to talk about the issues where we disagree. Which, in practice, means not talking about immigration.

So the moderators were just being good Democrats, as they were on other tough issues and in frequently interrupting Trump and Pence on behalf of Biden and Harris.

Of course, the Commission on Presidential Debates won’t help. It picked former C-Span’s Steve Scully, a former Biden intern, to moderate the now-canceled second debate, and selected NBC’s Kristen Welker for the third. The commission is so biased it supported Scully’s laughable claim that someone hacked his Twitter account when his tweet to spiteful NeverTrumper Anthony Scaramucci surfaced [Steve Scully has history of blaming 'hackers' for posts made on his Twitter account, by Joseph A. Wulfsohn, Fox News, October 8, 2020].

But none of that is an excuse for Trump and Pence. They know the moderators are hopelessly biased and that they must bring up subjects the moderators won’t.

Biden and Harris offer plenty of material. Their Open-Borders agenda is extremely unpopular, which means Trump must champion his temporary immigration moratorium that protected more than half a million American jobs. Roughly two-thirds of Americans support it, including a plurality of Democrats. Only 15 percent of Americans oppose it [Poll shows growing disconnect over Trump's hard-line immigration policies, by Alan Gomez, USA Today, August 12, 2020].

The moratorium puts Trump on the side of American workers. By opposing it, Biden would side with cheap foreign labor and its lobby on Capitol Hill.

Trump can also force the Democrats to admit they want Open Borders. Harris, for instance, backed the decriminalization of illegal immigration during the primary. Only 27 percent of Americans support such a ridiculous idea [NPR/PBS NewsHour/Marist Poll, July 17, 2019].

Neocon Continetti showed just how extreme Biden and Harris are:

[T]urn to the Biden-Harris campaign website. There, the Democrats write that they would “rescind the un-American travel and refugee bans, also referred to as ‘Muslim bans.’” They would “end Trump’s detrimental asylum policies,” including the Migrant Protection Protocols. They would reverse the public charge rule, which makes it harder for welfare beneficiaries to become permanent residents. They would halt construction of the border wall and “direct federal resources to smart border enforcement efforts, like investments in improving screening infrastructure at our ports of entry.” They would reinstate the DACA protections for illegal immigrants brought here as children, and for their parents. And Biden and Harris would “create a roadmap to citizenship,” not permanent legal residency, for the remaining millions of illegal immigrants “who register, are up-to-date on their taxes, and pass a background check.”

In short, a President Biden would return immigration policy to the status quo before Trump. With this difference: Biden, unlike Obama, would be dealing with a Democratic Party whose left wing has been radicalized and includes prominent officials who support such extreme measures as decriminalizing border crossing and abolishing U.S. Immigration and Customs Enforcement. Senator Harris herself has called for “restructuring” ICE (and for abolishing private health insurance, banning fracking, and imposing universal background checks for gun purchases through administrative fiat). The leftward drift of the Democrats makes immigration politics more fraught, and more polarizing. Having learned nothing from the Trump phenomenon, Biden and Harris are eager to reinstate the exact policies that gave birth to it?

But Trump or Pence left all that gold in the mine!

Again, before last week’s tweet, Trump had seemingly forgotten about his moratorium. It didn’t feature in his lengthy RNC address, and he’s ignored it at rallies.

But failing to force a discussion of immigration at the debate has been his most costly error. The most charitable and likely explanation is that Trump was (as usual) unprepared. He also failed to sufficiently explain Critical Race Theory and other topics.

Pence is another matter. He became a key Amnesty booster during the 2006-7 congressional immigration battle and would have permitted Corporate American to write immigration policy. Despite backing Trump’s policies, his priorities are not America First. He can’t be trusted.

Trump faces Biden (and moderator Welker) on Oct. 22. If she raises immigration, she’ll likely try to corner him on the “kids-in-cages” lie and immigrant sob stories. He shouldn’t rise to that bait. If Welker unwisely brings it up, he can hang it on Biden. Trump merely housed kids in an Obama-era facility [Barack’s ICE chief: Cages were Obama’s idea, by Paul Bedard, Washington Examiner, June 25, 2019].

Whatever Welker does, Trump must hit Biden on these points:

Then Trump must demand answers:

A brutal attack on immigration, citing the Biden-Harris website, could give Trump a solid debate victory heading into an election just 12 days away. But the key is preparation, challenging the premises of Welker’s loaded questions, and pulling back the curtain on Biden’s open-borders agenda.

My sources say Trump is eager to pursue cultural war messaging to rev up his base for Election Day. Good idea.

But hammering Biden on immigration from now until then is the key to a second term.