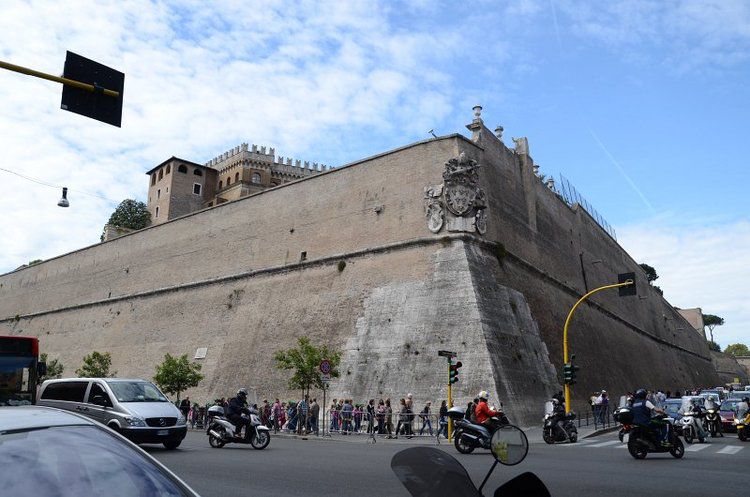 The Pope has said, according to the New York Times, that Donald Trump isn't a Christian. (Trump is a Presbyterian.)

He's also said that it's un-Christian to build a wall:

The @Pontifex says anyone who builds walls isn't a real Christian. Meanwhile, in Vatican City... pic.twitter.com/sbMa5xVcD1

The Pope's actual quote was “A person who thinks only about building walls, wherever they may be, and not building bridges, is not Christian.”[Pope Francis Suggests Donald Trump Is ‘Not Christian’, by Jim Yardley, February 18, 2016]

Trump has responded, in a press release plainly written by himself, by defending Christianity (emphasis added):

If and when the Vatican is attacked by ISIS, which as everyone knows is ISIS’s ultimate trophy, I can promise you that the Pope would have only wished and prayed that Donald Trump would have been President because this would not have happened. ISIS would have been eradicated unlike what is happening now with our all talk, no action politicians.

The Mexican government and its leadership has made many disparaging remarks about me to the Pope, because they want to continue to rip off the United States, both on trade and at the border, and they understand I am totally wise to them. The Pope only heard one side of the story - he didn’t see the crime, the drug trafficking and the negative economic impact the current policies have on the United States. He doesn’t see how Mexican leadership is outsmarting President Obama and our leadership in every aspect of negotiation.

For a religious leader to question a person’s faith is disgraceful. I am proud to be a Christian and as President I will not allow Christianity to be consistently attacked and weakened, unlike what is happening now, with our current President. No leader, especially a religious leader, should have the right to question another man’s religion or faith. They are using the Pope as a pawn and they should be ashamed of themselves for doing so, especially when so many lives are involved and when illegal immigration is so rampant.[Emphasis added]

It's interesting to note the shift in NYT attitudes to Catholicism based on the issue involved. In a blog post called New York Times and Bishops—1989 and 2006 I noted that the Times published a famous editorial in 1989, which Catholics haven't forgotten:

[T]he 26th of November, 1989, when a New York Times editorial solemnly warned Catholic bishops that their resistance to abortion-on- demand threatened the “truce of tolerance” by which Catholics were permitted to play a part in American public life: a warning that was, even by Times' standards, an exercise in brazen chutzpah.[Christian Conviction & Democratic EtiquetteBy George Weigel, First Things, March 1994]

The editorial, [The Bishop and the Truce of Tolerance] was about Leo Maher, the Bishop of San Diego, who had “denied communion” to a pro-abortion California Assemblywoman, who had no trouble finding a liberal Bishop who would give her Communion. In any case, this was a purely internal matter of religious discipline. But the Times insisted that this was a terrible day for American democracy—imagine a religious leader claiming the right to influence an American politician!

If Catholic leaders couldn't restrain themselves, said the Times, there'd have to be an end to the "truce of tolerance" that restrained American anti-Catholicism. In 2006, the Times was backing Roger Mahony's call for massive resistance to immigration law, including civil disobedience.

In 2016, they're promoting the Pontiff's criticism of a Protestant politician as "un-Christian" because he wants to resist an actual invasion of Mexico. Chutzpah is right.