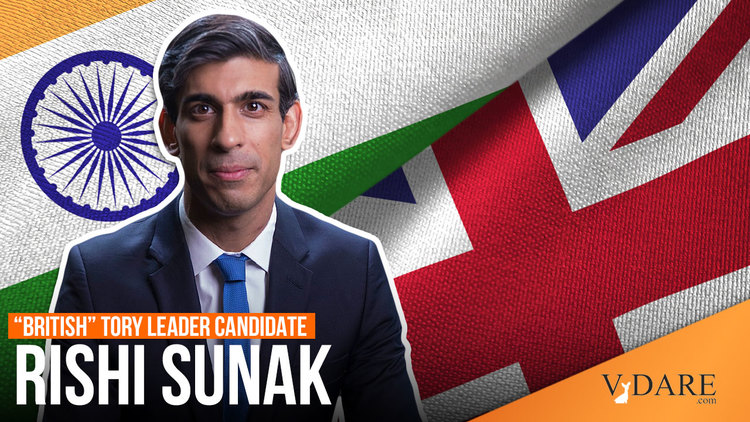 With the resignation of Boris Johnson for his constant, almost habitual, lying, Britain’s Conservative aka. “Tory” Party is currently electing its new leader. After two rounds of balloting, the contestants have been cut down to five; the third round is on Monday, July 18. The chance that the new leader will be a white British male is essentially zero. Why?

Of the 12 people who initially put themselves forward (or, in the case of Home Secretary Priti Patel, almost put herself forward) as candidates; only three were actually British, in the sense of having two ethnically British parents (Jeremy Hunt, Penny Mordaunt, Liz Truss). Another was Jewish (Grant Shapps); one was half-French and a quarter-Jewish (Tom Tugendhat); and the rest were assorted visible minorities: a Nigerian, five (!) ethnic Indians or Pakistanis, and an Iraqi who arrived in the U.K. aged 11. This is in a country that is at least 86% white and in which 90% of Members of Parliament are white [Ethnic Diversity in Politics and Public Life, by Elise Uberoi and Richard Tunnicliffe, UK Parliament, November 26, 2021].

The most obvious answer: Political Correctness—that minorities are overpromoted within the Conservative Party. I don’t think this is the entire story, but it certainly appears to be highly relevant.

Unlike in the U.S., the central bureaucracies of political parties in the U.K. exert a lot of control over which candidates a local constituency (= U.S. House of Representatives district) can select, and in the Conservative Party case it’s been getting tighter. This is critical, because the Party Leader can only be selected from among Members of Parliament.

In 2002, when the Conservatives were languishing in Opposition to Tony Blair’s powerful proto-Woke Labour government, the Conservative Party’s Shadow Foreign Secretary Oliver Letwin, himself the son of American Jews, was quoted as saying that that “Tories were not trying hard enough to attract women and ethnic-minority candidates as he helped to launch a scheme to give black, Asian and Chinese high-flyers experience of Parliament” [Party must attract more ethnic minorities, says Letwin,  by Marie Woolf, Independent, December 19, 2002].

By 2013, when David Cameron was Prime Minister, while Conservative Central Office did not exactly bring in ethnic minority quotas for parliamentary candidates, there was a kind of A-List of fast-tracked ethnic minorities (and women) whom the party bureaucrats did all within their power to ensure were selected for safe Conservative constituencies. According to Tory website Conservative Home:

Constituencies tend to want to select candidates who are local or, at least, have local connections. But ethnic minorities tend to be raised in Labour-held areas. So there was, in 2013, evidence that leaders of local Conservative Associations—whose members were supposed to select their constituency’s “Prospective Parliamentary Candidate” for the General Election—were pressured by Conservative Party Central Office to include a minority in the three finalists who make speeches before the local Association, after which members vote for one to be the candidate:

Senior Association members from the constituencies in question draw up a list of up to 15 possible candidates before meeting with senior party members . . .   They are then given a demographic presentation of how the constituency breaks down . . .  At any rate, CCHQ says that in each case to date the Association has voluntarily altered its longlist after the presentation and briefing.

In other words, local Conservative Associations, which tend to be composed of older whites, were being pressured to adopt minority candidates. This would help to explain why Attorney General Suella Braverman (an ethnic Indian and Buddhist convert from post-English London) is the MP for Hampshire’s Fareham, which is 96% white, and why Chancellor of the Exchequer Rishi Sunak (a Hindu from industrial Southampton) represents Richmond in Yorkshire, which is 97.8% white. Both were among the original 12 leadership candidates—and Sunak has topped both leadership votes to date.

There is also evidence that this process discriminated against right-wingers. Thus Daniel Hannan, an anti–European Union Member of the European Parliament well known to American conservatives both from his Washington Examiner columns and his YouTube speeches, was deselected from a safe Westminster seat in 2017 [Aldershot Conservatives threaten revolt over CCHQ’s refusal to offer them Hannan as a candidate, by Mark Wallace, Conservative Home, April 23, 2017].

And minorities, once MPs, may well have been overpromoted due to their ethnicity. Johnson leapfrogged Sunak from being Chief Secretary to the Treasury, one of the most junior cabinet posts, to Chancellor of the Exchequer, the most senior. (Johnson’s closest supporters are now saying he wasn’t a very good Chancellor [‘Rishi Sunak was not a successful chancellor,’ says Jacob-Rees Mogg, by Krishnan Guru-Murthy, Channel 4 News, July 7, 2022]).

Home Secretary Priti Patel is widely regarded as “inept” and as “Priti Vacant” [Priti Patel’s ineptitude is exactly what Boris admires in her, by John Crace, The Guardian, February 24, 2020], in other words, overpromoted. It is noteworthy that, despite being so senior, she wasn’t able to get enough nominations (20) from her fellow M.P.s to make it onto the ballot for the Conservative leadership.

Nor was former Chancellor Sajid Javid, despite the fact that his resignation, as Health Secretary, commenced the process that brought Johnson down [Eight left in contest to lead Conservatives, after Sajid Javid pulls out, BBC News, July 12, 2022].

And let’s add to this, as I discuss in my book Spiteful Mutants, a culture which constantly persuades ethnic minorities that they are wonderful and massively overrepresents their presence and power, while ridiculing white people, gas-lighting them with rewritings of their history in documentaries and movies and generally sapping their morale and feeling of importance.

But, at risk of sounding like a neocon, I don’t think Political Correctness is the only reason for the striking over-representation. 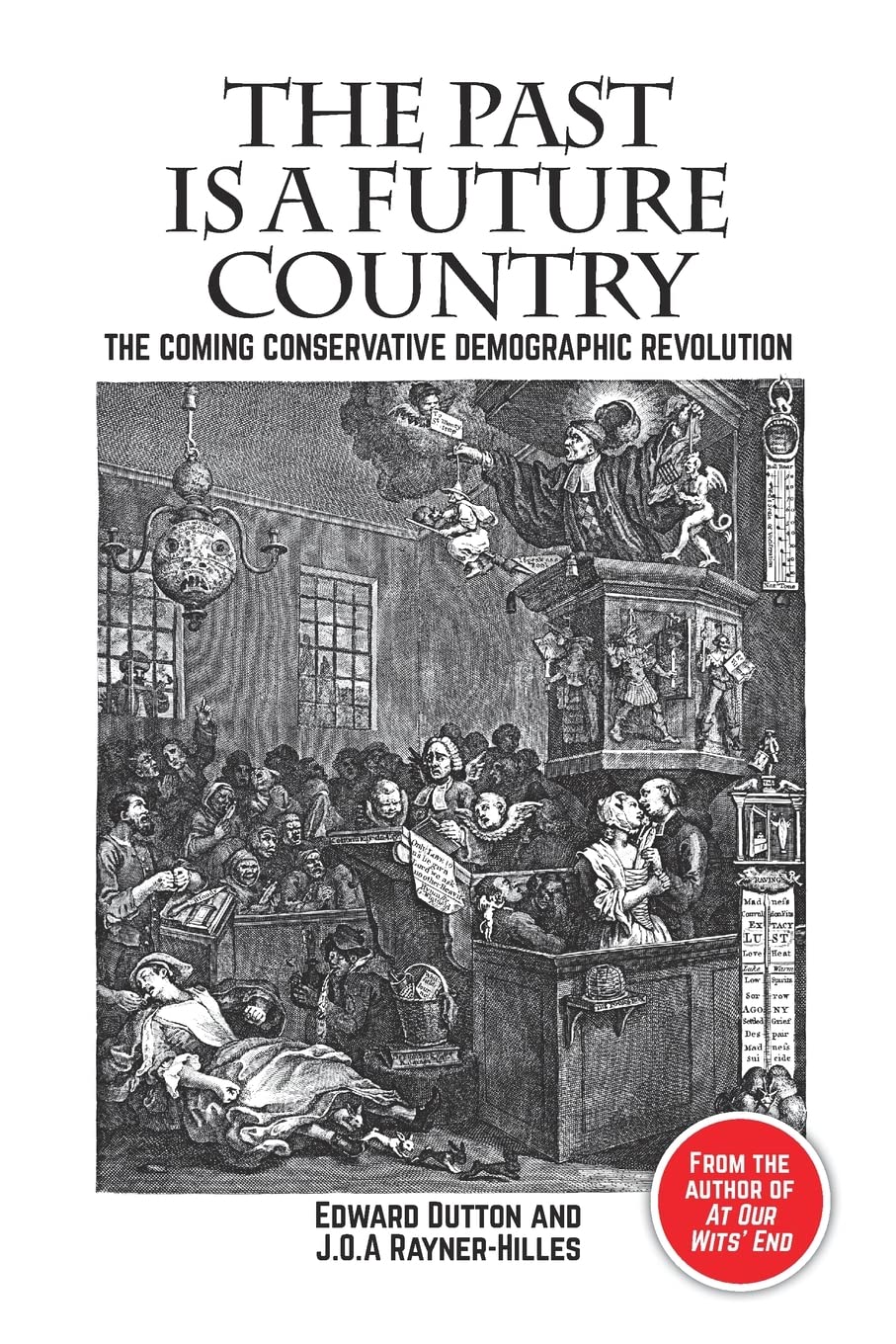 As I also discuss in my new book The Past is a Future Country: The Coming Conservative Demographic Revolution, emigrating correlates with intelligence and with being socioeconomically ambitious and assiduous. These traits predict socioeconomic status. All of these minority candidates are second-generation immigrants.

And as I also discussed in my earlier book Making Sense of Race, South Asians are higher in Conscientiousness (a key predictor of socioeconomic status) than whites. And Indian-background immigrants in the UK have the same average IQ as whites, partly because intelligence predicts immigration and also because India’s caste system—where people are constantly forced to marry those of the same caste—has created some—some!—highly intelligent Indian castes.

So, on this basis alone, we would expect Hindus in the UK to be overrepresented in high status positions. If tokenism is added to this, the overrepresentation should be very significant indeed, which is what we see.

Finally, there may indeed be something about being a First-Generation immigrant—that feeling of being excluded but also that awareness that your parents have made sacrifices to give you opportunities—which makes you need to prove yourself, which motivates you. British-Indian science writer Angela Saini has noted in her (albeit risible) anti-science book Superior: The Return of Race Science, that as a child in a white suburb of London she felt: “that cold lonely feeling of not quite being able to fit in . . .”

(We) were told we would have to work twice as hard to achieve the same as white people . . .  Among middle class Indians living in the United Kingdom (the group my parents belonged to) the weight of cultural pressure has generally been on children to become doctors, pharmacists, lawyers and accountants. These are professions that tend to be well-paid, with no shortage of job-opportunities and straightforward entry once you have the right qualifications. These are reliable routes into middle class society.

If you add all this together then it starts to become clear why ethnic minorities are so significantly overrepresented in the Conservative Party’s leadership contest.

The question is: Will it work? As The Atlantic magazine just acknowledged in a gushingly laudatory article:

Cameron’s diversity from above has not trickled down, and the Tory grass roots remain overwhelmingly male and white. Nor has the change of image necessarily resulted in more minority votes. During the last general election, the Conservatives stayed stuck at roughly 20 percent of the ethnic-minority vote compared with Labour’s 64 percent.

“Of those in contention, half are of ethnic-minority backgrounds and half are women,” @YasmeenSerhan writes, “That this could be achieved by a right-of-center party may seem odd, but in Britain the Conservatives have the best track record”:https://t.co/RZCRR6MCba

Ultimately, the new Leader of the Conservative Party will have to answer not to Diversity-enthusiast Tory apparatchiks, but to white British voters.