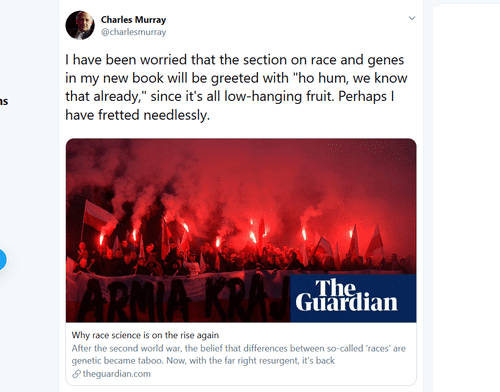 Charles Murray's New Book Will Be Pre-Hated By The GUARDIAN's Angela Saini, Among Others

I have been worried that the section on race and genes in my new book will be greeted with "ho hum, we know that already," since it's all low-hanging fruit. Perhaps I have fretted needlessly. https://t.co/MjkkSJ6iVC 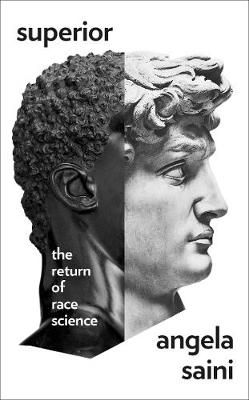 The article in question is

Why race science is on the rise again
After the second world war, the belief that differences between so-called ‘races’ are genetic became taboo. Now, with the far right resurgent, it’s back 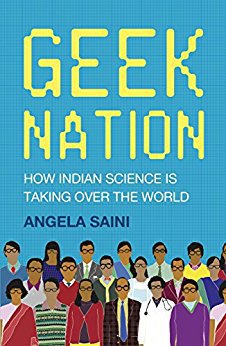 Indian science writer Angela Saini is the author of Superior: The Return of Race Science, for which this article is a promo. She's also, as I noted in an article called The GUARDIAN's Angela Saini (Guess How She Got That Name!) vs. "Eugenics"…AKA Science, the author of a book called Geek Nation: How Indian Science is Taking Over the World, in which India is described as "world’s next scientific superpower – a nation built not on conquest, oil or minerals, but on the scientific ingenuity of its people."

In fact, Indians aren't that bright on average, but the US and India get immigrants from the top of the Indian IQ tree.

The people who occupy the top of the IQ tree are the higher castes in India. A "Caste", like a race, is a "partiallly inbred extended family", and the fact that the so-called "Scheduled Castes"—previously known as "Untouchables"—qualify for India's version of Affirmative Action, and apparently need it while the highercastes are geeking out in American universities and Stock Exchange firms proves that the caste system is not just superstition—it's a millennia old eugenics plan, which actually works.

And Angela Saini is the product of that, which is why she's a Guardian writer denouncing the idea that IQ is hereditary.