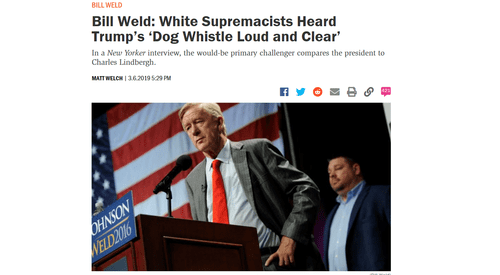 Trump Challenger, WASP Patrician Bill Weld, Has Immigration Views That Would Destroy America. What’s Wrong With Him/ Them?

Former Massachusetts Republican governor Bill Weld [Email him] announced last week he will primary incumbent President Donald Trump for the 2020 Republican nomination and with him, he brings the worst immigration views the GOP has to offer.

Although Weld's chances of earning the nomination are virtually zero, his candidacy is still significant as a result of this WASP Establishment Rockefeller Republican's extreme—and apparently absolutely unreconstructed—views on immigration, which pose a serious threat to the country.

Unlike Trump, who at least campaigned on restricting legal immigration before shifting gears in the State of The Union in February (and then possibly shifting back) Weld, does not even pretend to care about the invasion happening in the country via the southern border. In 2014, Weld described himself as a "rabid liberal on immigration". On that, he is correct. And when it comes to those who believe Americans have the right to control to decide who can and cannot live in the country, his rhetoric mirrors any far-left social justice warrior.

During the 2016 campaign, Weld, who essentially endorsed Hillary Clinton despite being the Libertarian Party VP candidate, called Trump's immigration plan Nazi-esque. He said, "I can hear the glass crunching on Kristallnacht in the ghettos of Warsaw and Vienna when I hear that, honest." [Libertarian VP candidate compares Trump plan to Kristallnacht , by Rebecca Savransky, The Hill, May 19, 2016] 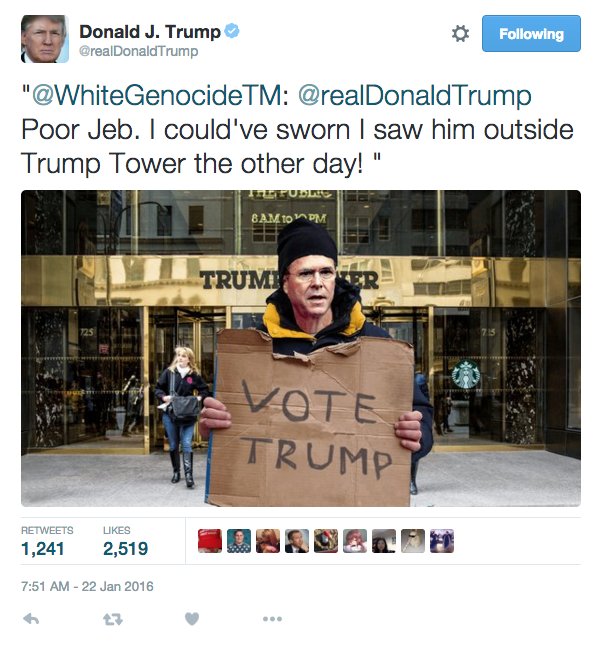 Weld has not toned down his rhetoric since Trump was elected. Earlier this year, he told the New Yorker that Trump was appealing to "white supremacists" and "they heard the dog whistle loud and clear"—because in 2016 Trump retweeted an anti-¡Jeb! meme from a Twitter user who had also once tweeted a picture of George Lincoln Rockwell, the founder of the American Nazi Party, in other words what liberals used to denounce as “Guilt by Association.” [Bill Weld: White Supremacists Heard Trump’s ‘Dog Whistle Loud and Clear’ , Reason Magazine, March 6, 2019 ] Of course, Weld ignores that Nazis aren't exactly the most popular group in America or remotely prevalent, so knowingly retweeting a picture of one would not be a great campaign strategy.

Policy-wise, Weld's immigration views would fundamentally destroy the Republican Party—the party he wants to reclaim with his extreme libertarian views.

Weld is against additional border security and favors granting Amnesty to illegal immigrants, although it would mean millions of additional, mostly Left-leaning, Hispanic voters in the country.

Instead, he wants to put policies in place which would only encourage more of them to come into the country. Being in favor of Amnesty, he has already made it clear he does not care to enforce existing immigration law thus incentivizing more low-skill workers from Latin America to come to the United States. [It’s Official: Bill Weld Announces Primary Challenge to Donald Trump,  By Matt Welch, Reason, April 16, 2019]

It's also worth noting Weld has explicitly supported increasing the number of H1-B Visa workers permitted to the United States on an annual basis. He labeled the current cap on workers "unrealistic" in a 2013 Boston Globe op-ed, indicating he would like more people to come into the country for work instead of training Americans to take well-paying jobs.[Expand paths for legal immigration, by William F. Weld and Susan J. Cohen, April 21, 2013] (Co-author Susan Cohen is an immigration lawyer at the same BigLaw firm that Welch works for when he’s not running for office.)

Being on the libertarian side, Weld prioritizes GDP growth over decent working conditions for the American people. He is against raising the minimum wage which would help price out low-skill immigrant labor; back in 1995, he vetoed a bill which would have raised Massachusetts' minimum wage from $4.25 an hour to $4.75 per hour ($7.92 in today's dollars). He is against labor unions and hired non-union workers for infrastructure projects during his tenure as Massachusetts' governor because he favors cheap labor. [Which Side Are They On, by Phil Primack, CommonWealth Magazine, April 1, 1999] And despite his love of GDP, Weld holds one view contradictory to his colorblind laissez-faire capitalist approach: supporting Affirmative Action. [A Race Too Far? by Jack Beatty, Atlantic, August 1996 ]

In other words, not only does Weld think the cheapest labor sources possible are good for the economy, but he wants employers to discriminate against white people. Affirmative Action directly helps Hispanic immigrants get hired for jobs or placed into prestigious universities, and not on the basis of merit.

Unlike other Libertarians who try to mask their Open Borders madness by saying they are in favor of abolishing the welfare state, Weld does not even try to pretend to support that impossible proposal. Instead, he has embraced the very welfare state which helps brings Latino immigrants to America in droves. According to the Center For Immigration Studies, 73 percent of Central American and Mexican households use welfare; and the Migration Policy Institute points out they comprise 67 percent of the country’s illegal immigrants.

Up until the past decade, Open Borders tended to be a libertarian pipedream, not mainstream in US politics. Some Congressional Democrats even supported the Secure Fence Act of 2006 (but wouldn’t actually appropriate funds for it). Even socialist Democratic Presidential candidate Bernie Sanders called open borders a "Koch Brothers proposal" in 2015 and acknowledged mass immigration depresses wages. The Center for Immigration Studies confirms this, showing competing with immigrant labor costs American workers $402 billion per year in lost wages. [ Immigration and the American Worker, by George Borjas, April 9, 2013]

However, it's become a convenient electoral strategy for Democrats to support exactly what Sanders warned against so they can gain more votes. In 2012, the Pew Research Center found that 81 percent of first generation Latino immigrants favor bigger government. [Hispanics Favor Bigger Role for Government, by Russell Heimlich, April 20, 2012] Loose immigration laws to ship in more Left-wing voters and help the party appeal to the radical Left, who views enforcing immigration laws as racist.

"Noncitizens" are allowed to vote in many local elections, including in San Francisco, And in 2011, state officials in New Mexico recognized illegals with drivers licenses had voted in the most recent statewide election. With a lack of photo ID and proof of citizenship required at voting stations, a system exists which enables illegal voting.

Even if by some impossible circumstances someone like Weld were to be elected and ram through their agenda, it ultimately wouldn't matter. With the surge in immigration someone with his views would cause, the Left would have a major electoral advantage. When elected with a supermajority, they could reverse any progress he made for the conservative cause and govern the entire country like California—a Republican stronghold before Ronald Reagan granted amnesty to three million illegals in 1986.

Fortunately for those who want the US to protect its borders, Weld is an unpopular candidate. A recent Des Moines Register poll among right-leaning Iowa voters showed him with a 4 percent approval rating in the state, and a 15 percent disapproval rating. Notably, 81 percent did not even know enough about him to have an opinion, a further indication of how irrelevant the ultraliberal Northeast faction of the GOP has become. [Caucus 2020: 5 takeaways from the Des Moines Register's latest Iowa Poll, by Brianne Pfannenstiel, Des Moines Register, March 11, 2019]

However, if by some unfortunate scenario Weld’s ideology were to come to power at some point in the future, it would quickly prove itself disastrous and counterproductive even to the fiscally conservative part of his agenda.

We can only speculate why the patrician Weld refuses to acknowledge this reality.