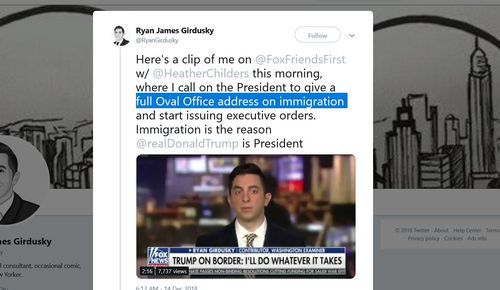 What would happen if President Trump stuck to his threat to shut down the government to get the wall? It’s the only way the president may get wall funding and it would signal to overconfident Democrats that he won’t be a pushover as they take control of the House. Will Democrats actually cave? They may—especially if Trump takes Ryan J. Girdusky’s suggestion [What must Trump do to make progress on immigration?, Fox And Friends,December 14, 2018] and turns public opinion around with powerful addresses from the Oval Office that pin surging illegal immigration on the Democrats. 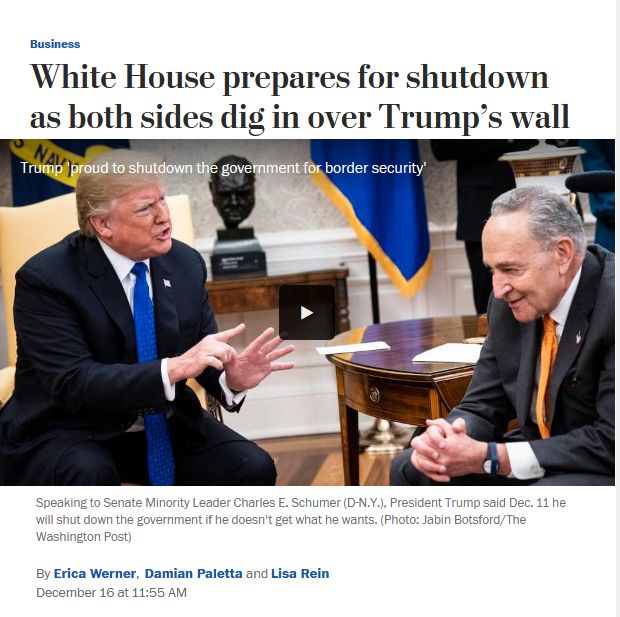 At the moment, wall funding has the necessary votes to pass the House, but not the 60 votes it needs to clear the Senate. (There are currently just 51 Republican Senators, going up to 53 in the next Congress). Democrat leaders show no interest in negotiating over the wall and claim to be unfazed by the shutdown threat. But things could dramatically change if Democrats realize Trump won’t back down [White House prepares for shutdown as GOP lawmakers struggle for an alternative, by Erica Werner,
Damian Paletta and Lisa Rein, The Washington Post, December 15, 2018].

Trump may have to keep the government shutdown for nearly a month before Democrats come to an agreement with him—past January 3,the day Democrats take the House—in order to send a message.

That would mean he would have to ignore the cries from weak-kneed Republicans and 24/7 Main Stream Media outrage at him for keeping government bureaucrats at home.

But seventy-five percent of the government would remain open. And it’s far riskier for Trump to give up on the wall than to fight for it. Voters would probably soon forget about this shutdown as they did with the 2013 shutdown.

Trump has the power to keep the government shut down as long as he wants because even though there are not enough Republicans who would vote to override his veto, especially in the upcoming Congress, where the GOP caucus will contain “fewer, but better” Republicans, as Greta Garbo said in Ninotchka.  Even if his veto is eventually overridden, he will have stirred up his base—and fingered a lot of enemies to blame.

Democrats could even ultimately agree to fully fund the wall in exchange for permanent legalization of those who receive Deferred Action for Childhood Arrivals, a deal that has been floating around for a time. This is clearly not ideal for immigration patriots, but it may be only way we’re going to get a wall unless and until there is a massive Republican victory in 2020.

But will Trump follow through on the shutdown threat? He has always caved in before. And the signs from his own party aren’t that promising.

The GOP gladly took the first full week of December off to remember the late George H.W. Bush--less out of mourning, and more out of the desire to do nothing in the lame-duck session. [Congressional Business Slows As Members Remember Ex-President Bush, by Scott Detrow, NPR, December 4, 2018]. Republicans were clearly disoriented by Trump’s shutdown threat in his December 11 White House confrontation with Nancy Pelosi and Chuck Schumer and many of them are doing everything they can distance themselves from such a sentiment. “I’m on the record saying numerous times I think a shutdown is a fool’s errand. Every shutdown we’ve been in, nobody wins. So I’m very discouraged by that,” West Virginia Sen. Shelley Moore Capito told The Washington Post. [Trump’s ultimatum on border wall boxes in fellow Republicans, by Erica Werner, Sean Sullivan and Seung Min Kim, December 12, 2018]

According to WaPo, some GOP House leaders question whether it’s worth passing wall funding when the Senate will reject it: “The question of whether to do it is a question of wisdom and strategy and tactics, and it’s highly debatable about whether that’s the right move,” North Carolina Rep. Patrick McHenry, the deputy majority whip.

But even if squeamish Republicans don’t want a shutdown, one looks likely to happen anyway due to Democrats’ refusing to cede even one inch to the opposition. Pelosi said last week she would rather keep the government “closed forever” than fund Trump’s wall. [Pelosi: No wall funding, even if that means ‘government closed forever’, by Chris Pandolfo, Conservative Review, December 13, 2018]. Reportedly, the White House is now even downplaying the idea of a one- or two-week stopgap funding measure. [White House prepares for shutdown as both sides dig in over Trump’s wall, By Erica Werner, Damian Paletta and Lisa Rein, Washington Post, December 16, 2018]

Meanwhile, incredibly, the Trump Administration and the Congressional GOP have been wasting all of their political capital in the lame-duck session on “criminal justice reform.” Jared Kushner has cajoled Conservative Inc. into promoting the supposed greatness of thousands of criminals joining the general population. Kushner even got an endorsement for the bill from Fox Broadcasting Company, effectively silencing criticism from Fox News hosts. Trump’s son-in-law has also put in many hours persuading Republican lawmakers to sign on for criminal justice reform. [Kushner deploys conservative media campaign for his agenda, by Eliana Johnson and Burgess Everett, Politico, December 14, 2018]

But there is little effort to exert the same kind of pressure on conservative media and GOP lawmakers to support funding for the wall.

The Trumpian transformation of the GOP and the Beltway Right has clearly not yet gone far enough. “Build The Wall” is the slogan Trump won on, not “release the convicts.” The twisted priorities are a sign that, once again, Trump is advised by people who care little for his agenda and are capable of hoodwinking him into counter-productive proposals.

The lackadaisical way the Congressional Republicans have acted in the lame-duck session probably portends how they’ll act in the next two years.

They will drift along and refuse to advance a patriot agenda out of fear of the Democrats. They will focus on terrible “bipartisan” legislation that will not serve their base’s interests and sell it as “necessary” pandering to demographics who will never vote Republican.

However, this horrible future can be averted if Trump holds a firm line and shuts down the government. No compromise, no capitulation, no excuses. The commander-in-chief has to set the example for his party to follow when dealing with a Democrat-controlled House. If they relent without getting one additional dollar for the wall, they will signal to Democrats to walk all over them in the next two years.

A government shutdown is the only option for the GOP, and Trump must not let the establishment’s priorities to get in the way of his America First agenda.

Memo to Stephen Miller: get writing that Oval Office address. You could ask Darren Beattie for help.