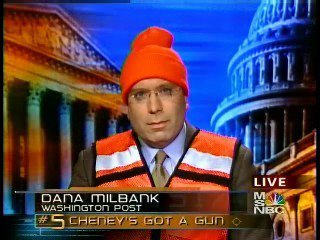 Journalists around the world are being targeted by suicide bombers, threatened with "hate crimes" prosecutions and thrown in jail for defending a free press from crazed Islamists.

You wouldn't know it from the circus-show antics of the American media.

Vice President Dick Cheney, as you all are aware from the Beltway press corps' incessant flapping and yapping, was involved in an accidental shooting during a weekend quail hunting trip in Texas. The victim is recovering.

It's the me-me-media hyperventilators who need intensive care.

Peacock Network News correspondent David Gregory, whose self-absorption rivals the leading brand of paper towels, threw a snit fit over the 18-hour delay in public disclosure of the incident. His exchange on Monday with White House press secretary Scott McClellan was a walking advertisement for beta blockers.

McClellan: "David, hold on, the cameras aren't on right now. You can do this later."

Gregory: "Don't accuse me of trying to pose to the cameras. Don't be a jerk to me personally when I'm asking you a serious question."

McClellan: "You don't have to yell."

Gregory: "I will yell! If you want to use that podium to try to take shots at me personally, which I don't appreciate, then I will raise my voice, because that's wrong!"

McClellan: "Calm down, Dave, calm down."

Gregory: "I'll calm down when I feel like calming down!"

Funny thing is, I can't recall the mainstream media melting down over the 30-hour delay—presided over by Hillary Clinton, according to internal records—in releasing the late White House counsel Vincent Foster's suicide note to authorities and her own husband. Can you?

News anchors who couldn't find the Second Amendment in the Bill of Rights if you put it under klieg lights pontificated about 28-gauge shotguns and hunting etiquette. CNN personality Kyra Phillips, in a rare moment of cable news humility, giggled self-consciously as she asked a correspondent to explain the difference between birdshot and bullets. "I think I might sound stupid," I heard her say.

Yes, but at least she didn't look stupid.

On that front, Washington Post reporter Dana Milbank outdid them all. Appearing on MSNBC to provide his fair and balanced analysis of the political fallout from Cheney's accident, Milbank donned a blaze orange stocking hat and matching reflective vest. Emulating a hunter in danger of being shot by Cheney, Milbank looked more like a Hooters parking attendant. Or a colorblind "Where's Waldo?" wannabe. Or a fugitive from a prison crew assigned to pick up roadside trash on Interstate 495.

"Lighten up," you say. Okay. I suggest the Washington Post run a large color photo of the costumed Dana Milbank with his bylined pieces from now on. That way, all readers may enjoy the hilarity every time Milbank's work as "Washington Post National Political Reporter" is published as objective news.

The bad joke of American journalism is made all the more odious by the plight of endangered defenders of press freedom abroad. Last week, Abdel Halim Akram Sabra, editor of the independent weekly Al-Hurriya, journalist Yahya Al Aabed and editor of the Yemen Observer Mohammed Al Asaadi, were arrested for publishing the Mohammed Cartoons—something most of our right-to-know poseurs in the U.S. media still refuse to do.

The arrested journalists' newspapers, along with another publication, Al Rai Al Aam, have all been shut down for printing the cartoons, which were first published by the Jyllands-Posten in Denmark five months ago to underscore the chilling effect of Islamism on European artists. In Johannesburg, South Africa, the high court allowed a Muslim group to pre-emptively block the publication of the cartoons by the nation's leading weekly, the Sunday Times.

Yet, here we are, as embassies blaze and editors cower in fear and radical imams ululate against the West, watching our esteemed media go Looney Tunes over an isolated hunting accident.

Who do you think will have the last laugh?