We Still Don’t Know What’s Happening With The Caravan Of Death, But We Shouldn’t Have To Worry Anyway 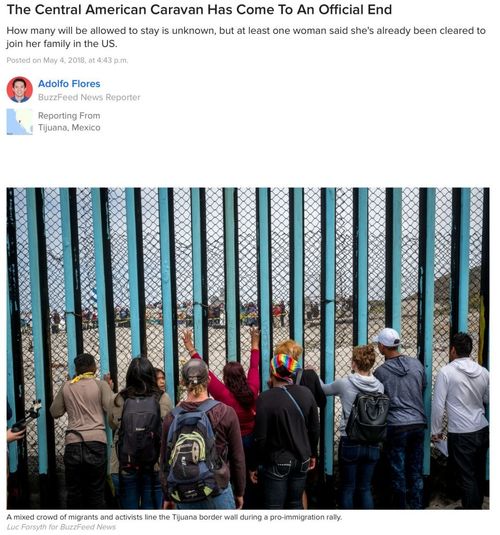 That Caravan caper: Deep State sabotage or is President Trump just not who we thought he was? It’s question that tries patriots’ hearts e.g. Broken promise: Trump admin surrenders to caravan and drug cartels, by Daniel Horowitz, Conservative Review, May 4, 2018. My take: it is still not clear from Main Stream Media reports that the Trump Administration is in fact releasing the caravanners it was compelled by law to accept for asylum processing (under the conventional interpretation which I dispute, see below) into the interior (where they would of course disappear, in violation of their promises). He may still be fighting: the caravanners could still be detained pending ultimate deportation (although the Administration’s ability to do this was restricted by the Omnibus disaster).

Of course, Congress should change the asylum law to refuse asylum applicants outright, as Trump keeps tweeting. But there is still more his Administration could do avert this looming Camp Of The Saints/ Merkel-type disaster.

And most seem to have eventually been allowed into the U.S. for processing of their asylum applications; Buzzfeed reports at least one has been released—to join relatives in the US. [The Central American Caravan Has Come To An Official By Adolfo Flores, May 4, 2018] Your humble correspondent cannot yet confirm.

Most Central American asylum seekers are eventually rejected.[For migrants in the caravan at the US-Mexico border, data show slim odds of asylum, by Aamna Mohdin, Quartz, April 30, 2018] But quite probably some, most, or all caravanners will eventually be released pending that determination.

This current problem has arisen because of bad advice and decision-making by Department of Homeland Security (DHS) and Department of Justice (DOJ) employees.

And not all is black pills at the moment. There continue to be options.

The greatest failure was political, not legal. President Trump should have impressed upon Mexico the importance of this issue and the possible consequences. He did threaten NAFTA, but spelling out more consequences of allowing third-country nationals to traverse Mexico, legally or illegally, should have been an easy call. Shutting down a land POE to Mexican nationals, or ordering U.S. Customs and Border Protection (CBP) to do a border slow-down of all Mexican entries would have gotten Mexico’s attention. And there are much more serious options—such as seizure of the Coronado Islands, a new Pershing-style Punitive Expedition etc.

Clearly President Trump did not get the proper advice and counsel from his DHS Secretary. Is Kirstjen Nielsen a Deep State saboteur? She has been a complete failure on the Caravan of Death To America. Of course, she might just be ignorant of the options given her lack of experience with immigration enforcement.

Here I disagree with the conventional legal wisdom. There is no right to enter the United States—even for asylum claimants. Title 8 United States Code, The Immigration and Nationality Act of 1952, as amended, Section 212(f), gives President Trump all the authority he needed to prohibit the entry of the Caravanners of Death. [Scope and History of Section 212(f) Presidential Authority to Suspend/Restrict Entry by Proclamation, MyAttorneyUSA.com]

1. Suspension of entry or imposition of restrictions by President

President Trump could have easily signed an order prohibiting the entry of the Caravan aliens and instructed the Commissioner of U.S. Customs and Border Protection to instruct his subordinates at the San Ysidro POE to refuse any claims of asylum, either by stationing Customs and Border Protection Officers and Border Patrol Agents at the international border demarcation line to prohibit their entry or to physically remove any of those aliens in the prohibited class who make an attempt at an asylum claim.

Trump could even have given himself some cover by publically notifying those aliens that they could apply for refugee status at the American Embassy in Mexico City or at any American Consulate in Mexico. At those diplomatic posts, their applications could easily be denied—and the aliens would become Mexico’s problem.

However, it appears that saboteurs in DHS did not inform the President that he had these options.

The next option, the one we are stuck with now, is actually processing the aliens by the laws, as written, not as badly practiced. It’s been done before, and successfully. As I wrote during the Obama-facilitated kidinvasion of 2014:

[N]ew laws are not needed to stop the latest wave of illegal immigration—because the law enforcement solution is already available. Past influxes were easily handled by the existing system as recently as the 1980s and 1990s, and there are even more tools available today. What is needed is enforcement of existing statutes—not the sinister farce of phony legislation.

Indeed, the laws regarding the refusal of admission of aliens have been changed for the better—at least as written, although not as currently practiced.

In 1996 Congress passed the Illegal Immigration Reform and Immigrant Responsibility Act, which made removal of inadmissible aliens much easier, and clearly defined political asylum and refugee status.

For our purposes, there were two key reforms: the Credible Fear process; and Expedited Removal.

Credible Fear means that the arriving alien requesting asylum must prove that to continue he has a credible fear, emphasis on the credible, of persecution by the government (i.e. gang violence is not enough) of which the person was a citizen.

But despite these restrictions, DOJ continues to ignore the Credible Fear part and the Persecution By Government part of the asylum process.

President Trump should order his Commissioner of CBP to have officers interview for both a Credible Fear and persecution Instead of having CBPOs accept any incredible or irrelevant claim of fear and not demanding evidence of persecution by a government authority, as is done now.

Once it is determined that there is no Credible Fear of persecution, the alien is then subject to immediate deportation under Expedited Removal.

This would require rejecting the past years’ practice of accepting any claim of victimhood by criminals, spouses, or other such nonsense, as the basis for asylum.

Fortunately Attorney General Jeff Sessions appears to see this problem, and is seeking to reform asylum claims back to the law as written. [Sessions tests limits of immigration powers with asylum moves, by Tai Kopan, March 10, 2018]

Your correspondent has been critical of Sessions, but this move on asylum is important.

Above all, though: President Trump must find the will (and the knowledge) to impose American law on this Caravan Of Death To America By Demographic Replacement—and the future ones that are being organized right now.