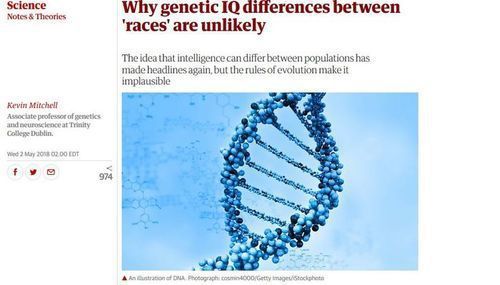 GUARDIAN: "Why Genetic IQ Differences Between 'Races' Are Unlikely"

From The Guardian a pretty good column making an a priori case against genetic differences in intelligence:

Why genetic IQ differences between ‘races’ are unlikely

I suspect the quotes around “races” might have been the editor’s choice, not the authors’s.

The idea that intelligence can differ between populations has made headlines again, but the rules of evolution make it implausible

Associate professor of genetics and neuroscience at Trinity College Dublin.

The idea that there may be genetic differences in intelligence between one population and another has resurfaced recently, notably in the form of a New York Times op-ed by the Harvard geneticist David Reich. …

In fact, the genetics and evolutionary history of intelligence suggest just the opposite. Most of our traits, such as height, for example, are set by natural selection at an optimal level – it’s good for humans to be about so tall, on average. Some genetic variants tend to make people a bit shorter than average and some tend to make people a bit taller. The balance between these variants has been maintained by natural selection to keep average height “just right”. Intelligence is not like that. Unlike height, where being ever taller had no benefit, strong evolutionary forces drove intelligence in one direction only in our ancient ancestors.

But it doesn’t seem to have happened for most other species. I could well imagine that, say, octopuses, chimps, and parrots are smarter than any species around 100 million years ago, but I don’t know that for sure. In general, there’s not much evidence that other species are getting consistently smarter, the way humans have developed much bigger brains over the last several million years.

Intelligence is our defining characteristic and our only real advantage over other animals. It gave us an initial leg-up in colonising diverse environments and its usefulness was massively amplified by the invention of culture and language. This increasing selective advantage of ever greater intelligence led to a snowball effect, which was probably only stopped by the limitations of the size of the birth canal and the metabolic demands of a large brain.

Which are not insignificant. I wouldn’t be surprised, for example, if smaller skulls are better at birth not just in getting born but in setting the width of the pelvic cradle, with a narrower pelvis being better for faster running.

Better running ability would seem like another one of those wholly good things like higher intelligence, but we see significant differences around the world in running ability, as seen in the Olympics.

By the way, I’ve never seen an estimate in difference in sprinting speed between the races in standard deviation terms. Anybody know?

Another issue is that local positive mutations don’t always migrate

… Because most random mutations that affect intelligence will reduce it, evolution will tend to select against them. Inevitably, new mutations will always arise in the population, but ones with a large effect on intelligence – that cause frank intellectual disability, for example – will be swiftly removed by natural selection. …

The result is that any population at any time will carry a varied bunch of mutations that affect intelligence. These will differ between populations, clans, families, and individuals. This constant churn of genetic variation works against any long-term rise or fall in intelligence.

Another point is that positive mutations don’t always travel to other places where they would useful.

Another crucial point is that genetics tends to affect intelligence in a much more indirect way than it does skin colour, height, and other physical traits. Like that Formula One car’s performance, intelligence is an emergent property of the whole system. There is no dedicated genetic module “for intelligence” that can be acted on independently by natural selection – not without affecting many other traits at the same time, often negatively.

In other words, there are tradeoffs to higher intelligence, and there might be some environments where it is less useful to Darwinian fitness than other environments.