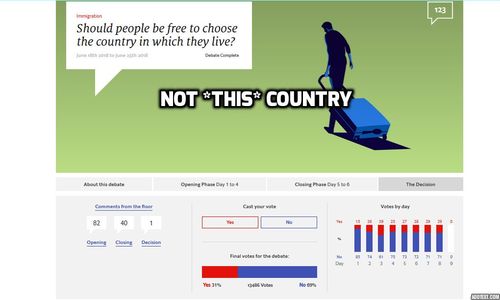 The Economist magazine just held a debate across the week June 18th to 25th. Topic: Should people be free to choose the country in which they live?

But then, you could say the same of: Should New York City abolish all restrictions on parking? Or: Should private ownership of thermonuclear weapons be permitted? Or: Should parents be allowed to kill, cook, and eat their children?

I'd put The Economist's debate topic in the same category as these other lunacies. It's nuts. Yet this very respectable journal, The Economist, offers it as a debate topic in all earnestness. Even more incredible, on the final vote, 31 percent of those who followed the debate—total voting number thirteen and a half thousand—31 percent of them nearly one in three, want to abolish national borders. (The others, to the obvious disappointment of The Economist’s moderator Lena Schipper, did not)

Not all readers of The Economist are actually economists. I'm a subscriber myself. It's just inertia on my part. I grew up in the age of weekly newsmagazines, got hooked on that, and The Economist is the nearest surviving thing that's still worth reading.

There's no doubt, though, that the abolition of borders, which is to say the abolition of nations, is taken as a serious position by a lot of professional economists. You may think it's nuts, and I may think it's nuts, and the prospect of its being taken up by, say, China, or by, say, India, or by, say Russia, or by, say, Japan is absolutely, utterly, and indisputably zero. But Professors of Economics discuss it earnestly among themselves, with graphs and charts and furrowed brows. 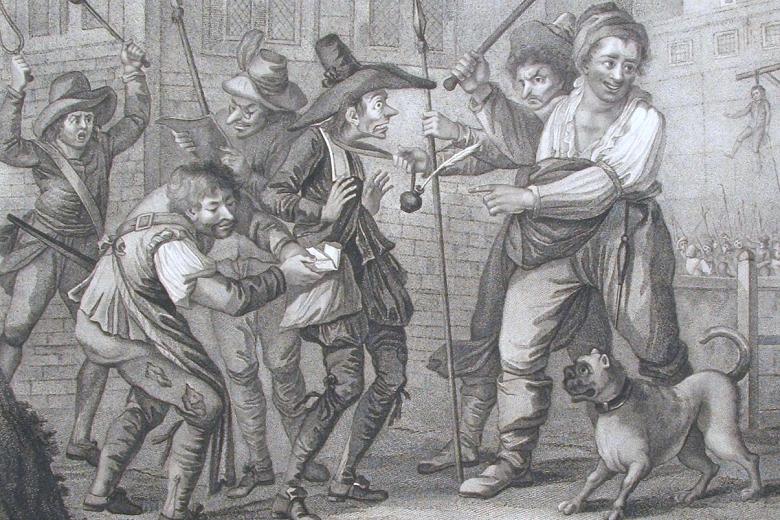 What a bunch of loons! I think Shakespeare’s Dick the Butcher (“The first thing we do, let’s kill all the lawyers”) had a point. He just picked on the wrong profession.

By way of illustration, here’s a three-part story from the Bronx.

Part One. The name here is Lesandro Guzman-Feliz, fifteen years old, hacked to death on the evening of June 20th by a Dominican street gang, the Trinitarios:

Surveillance video from the Cruz and Chiky grocery shows Guzman-Feliz being dragged out of the [store] by his hood.

His five attackers then joined in holding him down and hacking and stabbing him to death, one swinging into him with what appears to be a machete and another jabbing him repeatedly with a smaller knife. 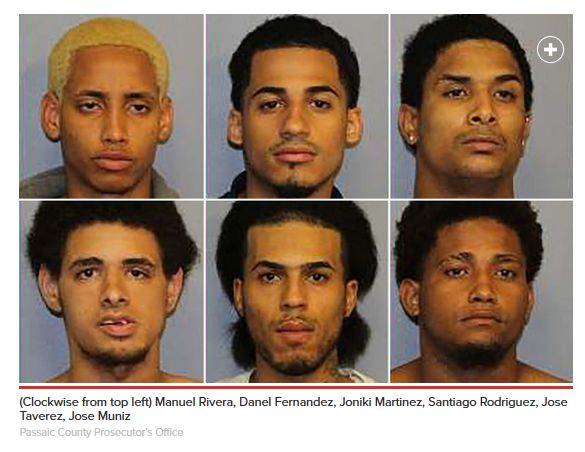 It was all a case of mistaken identity. The gangbangers were looking for a different guy they wanted to hack to death.

Young Lesandro seems to have been of good character. The gang has actually apologized to the boy's family via social media.

Several arrests have been made. Mugshots have been posted in local newspapers, though I advise not looking at them for too long if you're susceptible to nightmares. [A blow-by-blow breakdown of attack on slain Bronx teen, By Elizabeth Rosner and Max Jaeger, New York Post, June 29, 2018]

There have also been backgrounder stories on the gang:

There are around two million Dominicans in the U.S.A. today, of whom half arrived after 1990. The Dominican Republic itself has a population of only ten million.

And yes, it's a foreign country. We have never been under any obligation at all to grant settlement to any Dominican at all not the spouse or dependent child of a U.S. citizen. I guess someone just thought that mass Dominican immigration was a good idea. 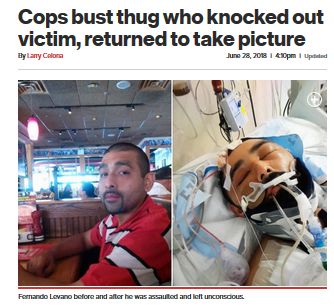 Part Two. The name here is Fernando Levano, 37 years old. Mr. Levano appears to be some variety of Hispanic, most likely Dominican or Puerto Rican, though I can't find precise details. June 18th he was standing on a street corner in the Bronx when he was sucker-punched by 22-year-old Luis Rivera. [Cops bust thug who knocked out victim, returned to take picture, By Larry Celona, New York Post, June 28, 2018]

The punch was so hard Levano suffered brain damage. Eleven days later he still hasn't regained consciousness, and may die. As he lay unconscious in the street, three unidentified passers-by emptied his pockets. Then Rivera, the assailant, returned and took cellphone pictures of his victim, apparently as souvenirs.

Part Three: The political Establishment in the Bronx got sucker-punched itself Tuesday night. A big piece of the borough, just to the east of where Part One and Part Two took place, is represented in Congress by ten-term machine politician Joe Crowley, ranked fourth-most powerful member of his party—the Democratic Party, of course—in the House of Representatives, and considered a strong contender for Speaker if the Democrats take the House this November.

But the Democrats had a primary, and Joe Crowley lost. Winner in the primary—and therefore the next House member for this district—was 28-year-old Alexandria Ocasio-Cortez.

Ms. Ocasio-Cortez is of course a Latina, born in the Bronx to Puerto Rican parents. She is also an ardent Leftist. She campaigned on free healthcare, guaranteed federal jobs, the abolition of ICE… the whole nine yards.

NumbersUSA grades Joe Crowley F-minus on recent immigration votes in the House, but that didn't help him. 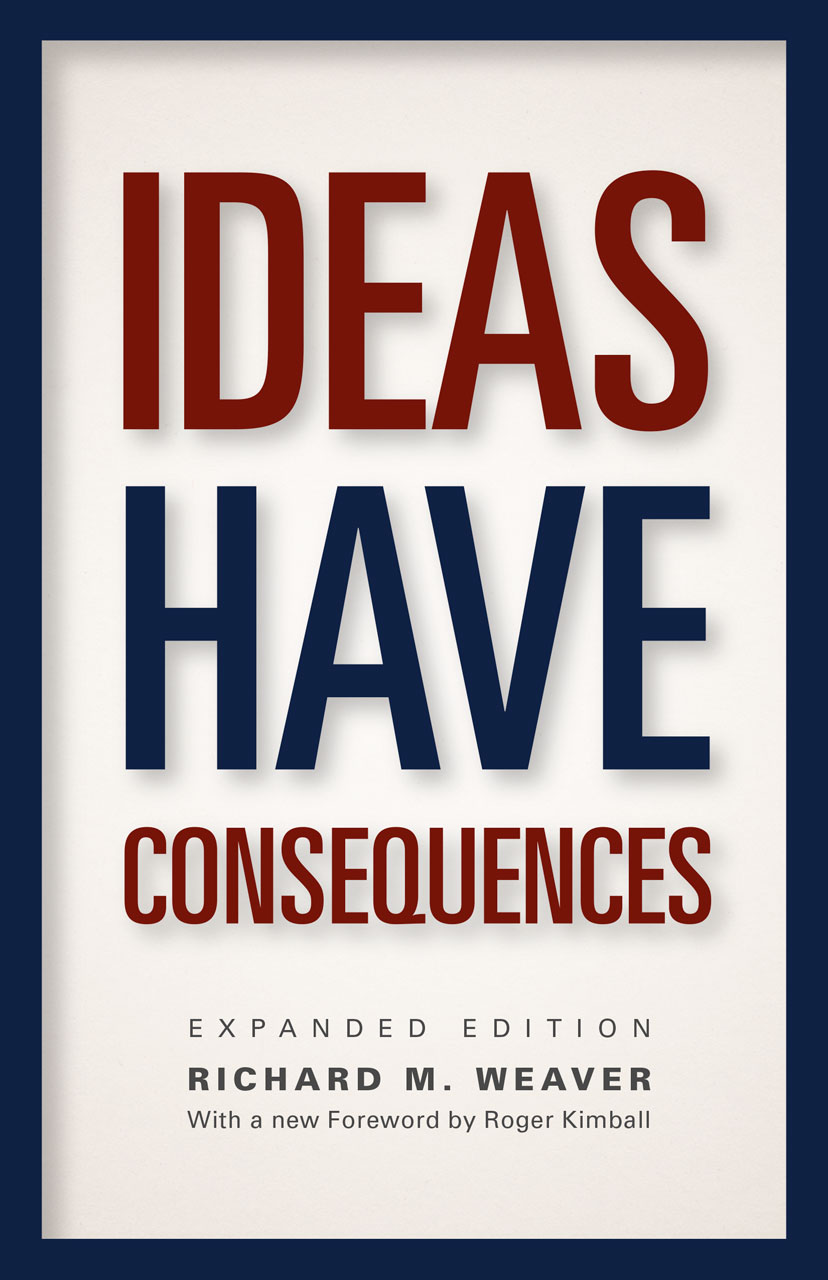 It doesn't exactly make Crowley stand out from the crowd, anyway: 83 percent of Democratic House members are F-minus and another twelve percent plain F.

Well, that's my three-part reply to the Economist: a grisly gang killing, an exceptionally heartless street assault, and an old-school Irish-American machine pol sent into retirement by a young Latina Bernie Bro, Bernie Sis, whatever.

What do we learn from this, comrades?

What we learn is that if you grant settlement to millions of Latinos and Latinas, you end up with Latino gang culture, Latino street crime, and voters hankering for Latino socialism.

The Open Borders boosters tell us that Latinos are natural conservatives: church-going, family-oriented folk. Give 'em a generation or two, we've been told for decades now, just give 'em time, they'll assimilate as good patriotic Americans.

What we in fact see: a big piece of one of our major cities turning into a Caribbean or Central American slum ruled by gangs, whose voters want Cuban- or Venezuelan-style socialism.

Richard Weaver famously said that Ideas Have Consequences. Well, immigration has consequences too. You could even show it on graphs and charts—if you wanted to.