The Philosophy Department Looks at Immigration 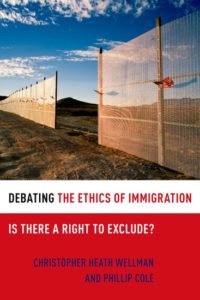 In Debating the Ethics of Immigration: Is There a Right to Exclude?, two academic philosophers, Professor Christopher Wellman  [Email ]of Washington University in St. Louis,  and Philip Cole [Twitter]of The University Of Wales  argue for and against the right of states to exclude foreigners. Their performance is likely to reinforce the very worst prejudices against the authors’ own discipline (and mine).

He helpfully defines a legitimate state: one that “adequately protects the human rights of its constituents and respects the rights of all others.”

The Nazis make their first appearance in Professor Wellman’s second paragraph. He is against them. The Nazis did not adequately protect the human rights of German citizens, thereby forfeiting the right of self-determination that accrues to legitimate states. Consequently, everyone had a moral right to immigrate to Nazi Germany.

Contemporary Norway is more to Professor Wellman’s taste. Protecting human rights as it does, the Norwegian government is entitled to determine whether it wishes to associate with foreigners by permitting them to immigrate. Professor Wellman compares this right to the discretion parents may exercise in regard to their own children: a mother may pack too many sweets in her child’s lunchbox, but such “suboptimal” parenting is within her rights and no one else’s business.

Norway is presently home to a large Pakistani immigrant population. Professor Wellman gives us little information about them, other than that they are “vibrant.”

No doubt the Norwegians ought to be grateful to these glamorous foreigners for bringing vibrancy to their dull little white-bread country. But what if they aren’t? [VDARE.com note: They aren't—see Brenda Walker's post Oslo Police: Nearly All Rapes Are Committed by Non-Western Men.]

Professor Wellman contends that the world must acquiesce in Norway’s xenophobia, in the same way one accepts the parenting mistakes of others. If Norway wants to pass up all the benefits of multiculturalism, it is their mistake to make.

Professor Wellman makes clear, however, that he does not consider freedom of association an “absolute” right. That would imply that Southern schools had a right to practice segregation. In the world of contemporary academic philosophy, such an inference is considered the ultimate reductio ad absurdum. But Professor Wellman bravely maintains a presumptive right of free association.

He then considers an argument for Open Borders—the “unfair distribution” of the world’s wealth:

Of course, wealth is not distributed by some higher power that irrationally practices favoritism toward fair-skinned nations. Wealth is produced, and most existing wealth is found in countries where most has been produced over the past several generations. One of the main motives was the producers’ expectation that they would be able to pass it on to their descendents, rather than see it confiscated for the benefit of strangers.

Norwegians are also better endowed than certain others with the qualities which enable wealth production, such as foresight, industriousness and intelligence: e.g., the average IQ in Norway is 100; in Chad, 72. I regard this state of affairs as neither fair nor unfair, since it is a natural fact not intended by anyone.

Professor Wellman does not discuss differences in intelligence. But he does explicitly claim that all persons are equally industrious: “If afforded a similar opportunity [to a Norwegian], there is no reason to think that any given Chadian would not happily work just as hard.”

Professor Wellman subscribes to the “colonial exploitation” theory of wealth distribution. He assumes today’s wealthy nations became wealthy by plundering the rightful property of colonized peoples. Of course, this would predict a former colonial power such as Portugal would be more prosperous than a nation like Norway. It would also lead us to expect African prosperity in never-colonized Liberia.

However that may be, Professor Wellman maintains that the history of colonialism somehow requires Norway to pay compensation to Chad. However, Norwegian readers will be relieved to learn that such a capital transfer could, in Professor Wellman’s view, be accomplished without the population of Chad actually immigrating to Norway. He does not give details of how the ransom is to be calculated, but seems to think a land as prosperous as Norway could afford it.

An immigration patriot might well conclude that, with friends like Professor Wellman, his cause needs no enemies. But we haven’t even begun to consider the arguments of Professor Cole, the book’s explicit defender of open borders.

Cole is at pains to refute

No doubt such an argument can easily succeed on its own terms. As Professor Cole says, the central principles of liberalism are equality and universality. The very existence of nation-states is a violation of these principles: nation-states by definition must distinguish between insiders and outsiders, and treat the two groups differently.

To cut to the chase, Professor Cole is mainly concerned with what he calls “exclusion based on racism.” He takes an extremely dim view of “racism”—kind of like Professor Wellman and the Nazis—and he is confident that all readers will concur with him:

Racism as an issue is more or less absent from philosophical discussions of immigration controls, probably because all of the participants are strongly antiracist. [My emphasis.-MW]

Professor Cole offers a brief history of what he considers to have been “exclusions based on racism,” including the Chinese Exclusion Act, the White Australia Policy, the United Kingdom’s Aliens Act (1905), as well as restrictive legislation in the history of Canada, New Zealand and Natal (South Africa).

If by “racism” Professor Cole means attention to ancestry, I am happy to concur with him: a great deal of immigration policy has been, and still is, motivated by such concerns. Are you thinking of applying for citizenship in India? It helps to be Indian. If you have China or Taiwan in your sights, best to be Chinese. South Korea gives preference to Koreans. Liberia and Haiti have both imposed constitutional requirements that citizens be of African ancestry.

Is this regard for the ancestry of immigrants “racism?” Professor Cole doesn’t say. All his examples of “racist” immigration law involve white countries excluding various swarthy peoples.

Professor Wellman’s views on this issue are also dubious, although at one point he explicitly holds that Norway belongs to the Norwegians. Yet elsewhere he makes this revealing remark:

It seems to me that there must be something wrong with a country’s denying admission on the basis of race. I must confess, however, that I find it surprisingly difficult to provide an entirely satisfying argument for this conclusion.

Recall that Professor Cole similarly refused to argue against “racism” on the grounds that everybody already agreed with him.

What might explain such strongly-held but rationally unsupported convictions on the part of these two learned philosophers? Might it possibly be due to both of them having had this very conviction deliberately inculcated in them since the age of five by every movie or television show they ever watched, every book they got assigned in school and every public authority figure with whom they ever came into contact?

If I were to attempt my own analysis of what Professors Wellman and Cole are pleased to call “racism,” I would begin by pointing out that Homo sapiens evolved for many thousands of years in small kinship-based hunter-gatherer bands. Survival depended on success in competition with other bands. Relations between bands, therefore, fluctuated between deep suspicion and murderous hatred. Any mistake in one’s perception of group boundaries was likely to be punished with death. This behavioral pattern is still visible in its rawest form among man’s nearest evolutionary relatives, African chimpanzees, who unhesitatingly kill intruders found within the territory of their troop.

Humans have inherited a similarly strong sense of the distinction between “our people” and “outsiders.” It is true that, because of our higher cognitive development, our tribal instinct can be educated to some extent: men genetically adapted to loyalty to a band of not more than a hundred kinsmen can be taught loyalty to a larger nation. Such education, however, is an entirely different matter than the eradication of all sense of group distinctions recommended by “antiracists.”

A vast scientific literature exists to back up the brief sketch I have just given. It has been produced by students of genetics, animal behavior, childhood development and evolutionary psychology. None of it was produced by academic philosophers.

A quick look at our authors’ references makes clear that most of their reading is devoted to the work of other contemporary academic philosophers. Much of this seems to consist of armchair speculation as to what a perfectly fair world of universal love would look like.

My message to academic philosophy: find a firmer basis in the careful study of human nature.

Martin Witkerk [Email him] writes from the mid-Atlantic region and has a Ph.D. in Philosophy from Tulane University.