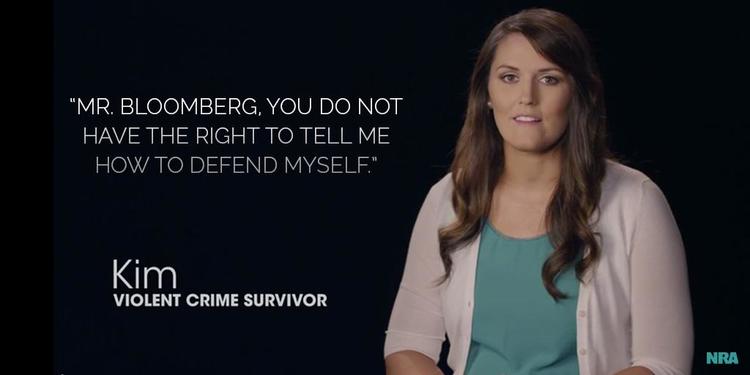 Kimberly Weeks, a survivor of violent crime, is standing up to anti-gun billionaire Michael Bloomberg and his gun control efforts. Listen to her call Michael Bloomberg out on his hypocrisy and say, “Mr. Bloomberg you do not have the right to tell me how to defend myself.“

Nasty New York Times editorial writer David Firestone [Email him] pretends to care about campaign scare-mongering. But what he and his elitist ilk really fear are independent-thinking women who have dared to exercise their First Amendment powers to defend their Second Amendment rights.

This week, Firestone took aim at "attack ads" sponsored by the National Rifle Association. The "worst commercial," he says, "features a rape victim describing her assault and accusing" former New York City Mayor Michael Bloomberg "of wanting to take away her right to defend herself." [The N.R.A.’s Instant Classic Attack Ads, October 28, 2014]

That rape victim has a name and a story Firestone couldn't even bother to mention. She is Kimberly Weeks, a brave and fierce Colorado woman who testified against the Bloomberg-backed gun-control measures that beleaguered Democratic Gov. John Hickenlooper now admits he passed "without basic facts" and concedes were ineffective from the get-go.

Weeks was brutally raped as a college junior at the University of Northern Colorado in Greeley. As she recounted last year, "I will never know if I would have been able to stop my rape if I had owned a firearm. I can tell you that any fear I had of guns evaporated as soon as I got a second chance at living my life. Had I been armed, I very well could have changed my circumstances and possibly prevented another attack on myself or the next victim."

Firestone dismissed Weeks' response to Bloomberg's gun-grabbing efforts by asserting that "the former mayor is not trying to take away anyone's legal handgun, and neither is any Democrat." Never mind that Colorado Democrats, goaded by Bloomberg and lobbied by Vice President Joe Biden, were contemplating a radical ban on concealed carry on college campuses.

Victims of sexual assault in Colorado were snubbed by Democratic state legislators, Weeks reminded voters. She is speaking out to prevent other rape victims and rape targets from being disarmed and dismissed Another rape victim and pro-concealed carry advocate, Amanda Collins, faced similar hostile treatment from Colorado Democrats when she protested draconian gun-control laws that undermined women's self-defense autonomy.

"I just want to say, statistics are not on your side, even if you had had a gun. ... Chances are that if you had had a gun, then he would have been able to get that from you and possibly use it against you," former Democratic state Sen. Evie Hudak lectured Collins. But as I've reported previously, even the liberal Denver Post pointed out that the old statistics Hudak cited from a liberal anti-gun group applied only to women with guns who were attacked by "intimate acquaintances," not strangers, as was the case with Collins.

But let's not let facts get in the way of a liberal New York Times writer's hysterical anti-hysteria diatribe.

While Firestone pronounces Weeks' ads as the "worst" example of the "use of fear," abortion rights group NARAL is running election ads telling Colorado women that Republicans are going to take away all their condoms. Harry Reid's super PAC is accusing North Carolina GOP Senate candidate Thom Tillis of causing "the shooting death of Trayvon Martin." And the Democratic Senatorial Campaign Committee has poured $2.5 million into scare-mongering ads in Alaska, Arkansas, Iowa, Louisiana and New Hampshire telling elderly voters that Republicans are going to strip them of their Social Security and Medicare.

When victims embrace liberal orthodoxies, they're heroes and absolute moral authorities in the eyes of The New York Times editorial board.

When victims become survivors who reject the Nanny State, they're liars, ideologues and pot-stirrers who deserve to be sneered at from the rarefied offices of the Fishwrap of Record.

The Times has spilled barrels and barrels of ink decrying the campus rape epidemic. Its opinion writers and reporters call for more money for sexual assault prevention, more government programs and more respect for rape victims. But when a rape victim advocates armed self-defense, where's the crusading New York Times?