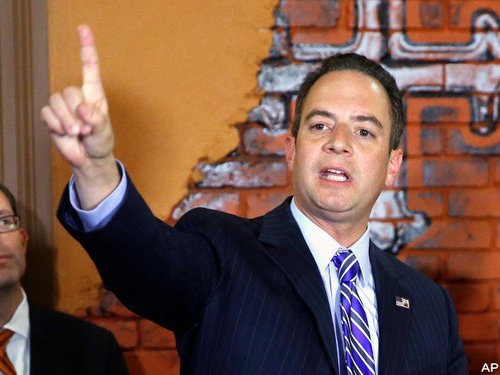 Reince Priebus, the chairman of the Republican National Committee (RNC), was on a conference call this past Monday evening, which was sponsored by TheTeaParty.net and attended by hundreds of Tea Party activists. During the conference call, a Tea Party activist asked him about President Barack Obama’s plans for executive amnesty. Priebus replied, “It’s unconstitutional, illegal, and we don’t support it.”

Breitbart.com covered the story. “‘While I can’t speak for the legislature, I’m very confident we will stop that,’ Priebus said. ‘We will do everything we can to make sure it doesn’t happen: Defunding, going to court, injunction. You name it. It’s wrong. It's illegal. And for so many reasons, and just the basic fabric of this country, we can’t allow it to happen and we won’t let it happen. I don’t know how to be any stronger than that. I’m telling you, everything we can do to stop it we will.’”

Breitbart goes on to quote Priebus,

“‘I have said repeatedly on immigration that the first thing is border security and the second thing is upholding the law that’s in place today. What ever happened to the border fence that was promised by Congress in 2006? It never happened. What about these sanctuary cities out there that take federal money and they’re not even upholding the law that we have in place? So somehow or another what can’t get lost in any of this conversation is the importance of border security and making sure that any sort of immigration reform talk doesn’t even begin without taking that first step.’”

As Ronald Reagan said to President Jimmy Carter, “There you go again.” There the GOP goes again: making a promise they have absolutely no intention of keeping.

Priebus’ promise that, should the GOP capture the U.S. Senate, they will stop Obama’s executive amnesty is just so much hot air. I guess he thinks that we have all forgotten then Speaker of The House Newt Gingrich’s “Contract With America.”

During the congressional elections of 1994, Gingrich promised the American people that if they put Republicans in charge of the Congress, they would pass legislation to eliminate five federal departments (Education, Energy, Commerce, Interior, and Housing and Urban Development), 95 federal domestic programs, and slash federal spending across the board. The GOP promises made during the ’94 elections became known as the “Contract With America.”

GOP promises during that election cycle proved extremely successful. In the House of Representatives there was a 54-seat swing to the Republicans, which gave them a majority of seats for the first time since 1954. In the U.S. Senate there was an eight-seat swing, which allowed the GOP to capture both houses of Congress.

During the succeeding congressional session, many of the elements of the Contract were indeed passed by the Republican-led House of Representatives. It was quite another story in the GOP-led Senate. In the Senate, most of the promised bills were either killed altogether or seriously compromised through a variety of watered-down amendments. A few bills—and I mean a precious few bills—made it somewhat intact out of the Senate. At the end of the session, very little of the Contract survived. In fact, during that time, Republican senators reminded everyone that the Contract With America was only the promise of the GOP House, that the GOP Senate never joined in that promise. (Politicians are the slickest liars in the world, are they not?)

While there were several positive results of that “Republican Revolution” of 1994, including a balanced budget in 1998 and surpluses in the federal budgets from 1999-2001—all of these budgets being proposed by Democratic President Bill Clinton—Gingrich and Senate Majority Leader Trent Lott quickly began to compromise away most of the principles of the 1994 Contract. This led to Gingrich being ousted as Speaker of the House.

Of course, none of the five federal departments targeted were eliminated—neither were any of the 95 targeted federal programs. In fact, not only were these departments and programs not eliminated, funding for all of these departments and programs actually INCREASED under the GOP-led Congress. In 2000, Edward Crane, president of the Cato Institute, noted that “the combined budgets of the 95 major programs that the Contract With America promised to eliminate have increased by 13%.”[On My Mind: GOP Pussycats, Forbes, November 13, 2000] And, in case Republicans want to try and blame the Democrat Bill Clinton for these budgetary backslidings, the facts just don’t support it.

Consider the fact that from 2001 through 2006, the GOP controlled the entire federal government: the White House, House of Representatives, and Senate. Plus, Republican-appointed justices comprised a majority on the U.S. Supreme Court. (That has been the case since the early 1970s). During those long six years, the GOP-dominated federal government NEVER revisited the principles of the Contract With America. In fact, the Bush years are on record as seeing the most explosive growth in federal spending and overreach in U.S. history to that time. There has been absolutely NOTHING fiscally conservative about the Twenty-First Century GOP. And that’s a fact.

Now we have a Democratic President, Barack Obama, who is one of the most unpopular presidents of our entire history, and the GOP is struggling to energize its own base. How pathetic is that? That’s why RNC Chairman Reince Priebus took to the air with a live conference call with Tea Party activists. The national GOP has so alienated Tea Party conservatives that it is concerned that even with a despised Democrat President, disenfranchised conservatives within the GOP could stay home in large numbers next Tuesday.

So, Priebus makes a Contract With America-type promise: give us the Senate and we will stop Obama’s executive amnesty. And even though it was a conference call, I assume he said it with a straight face. The problem is, it is a lie, and Priebus knows it.

Obama is going to sign his executive amnesty order soon after the elections and before the Senate convenes next year. And there are about as many Republicans in the Senate that favor amnesty as there are Democrats. Does anyone really think that John McCain, Lindsey Graham, Lamar Alexander, et al. are going to get exercised over amnesty? The Chamber of Commerce establishment Republicans are salivating over amnesty for illegals. Some of them are trying to hide an amnesty amendment in the upcoming NDAA even as we speak. Plus, just exactly what is the Senate going to do to overturn an executive amnesty order? I can already hear it. After the GOP wins the Senate, they will say, “Well, as the U.S. Senate, we can’t really do anything; we need a Republican President in 2016. Then we will do something about it.” And the beat goes on.

It’s not about stopping amnesty; it’s about political posturing for a November election. House Speaker John Boehner has promised Big Business Republicans an amnesty deal. Does anyone in their right mind believe the GOP is going to overturn an Obama amnesty order? It’s a campaign bluff. I know it; and so does Barack Obama. (I would love to be proven wrong; but the GOP track record says I am 100% right.)

The Breitbart report goes on to say, “Priebus said at the end of the town hall that he thinks it's important for Tea Partiers and the grassroots to hold Republicans accountable.

“‘I think it’s important to build our party through addition and make sure that we don’t subtract people out of our party,’ he said. ‘It's also important for the Tea Party to hold the Republican Party accountable. I get that. It’s not always a cheerleading opportunity. It’s both that we’re going to be with you and help you, but we have to hold you accountable once in a while. And I understand that and respect it.’”

No, Priebus doesn’t understand that; neither does he respect it. This is pure partisan party electioneering.

The GOP leadership has not allowed itself to be held accountable to ANYBODY. They wouldn’t let Ross Perot do it; they wouldn’t let Pat Buchanan do it; they wouldn’t let Ron Paul do it; and they aren’t letting the Tea Party Republicans do it. They think themselves above their own platform, above their conservative base, and even above the U.S. Constitution. Accordingly, they have been subtracting numbers from their own ranks for a long, long time. Where do you think the Libertarian and Constitution parties came from? Where do you think so many of the registered independent voters came from?

In any given national election the numbers of people who stay home and don’t vote always outnumber the ones who do vote. Why is that? It’s because both the Democrat and Republican parties have been ignoring so much of their grassroots base that people from both parties have been drifting away by the millions. People by the millions have given up on both major parties. Neither party in Washington, D.C., respects the people of the United States or the U.S. Constitution. Both parties grovel before Big Money. That’s why so many people have removed themselves from the two major parties.

If the Republican leadership in Washington, D.C., had been listening to its base over the past several years, Barack Obama would not be President today and the GOP would not be biting its fingernails as to whether they can take back the Senate. This should be a slam-dunk election for the GOP. And, despite the stiff-necked, Big Business, Big Brother leadership of the national Republican Party, I think the GOP will take the Senate. But if you think for one minute that a GOP-led Senate and House will do diddly squat to stop Obama’s amnesty order or to close our Southern Border, there is this bridge in the Mojave Desert you need to look at. The GOP is famous for doing NOTHING after elections are won.

Reince Priebus lamented over the failure of Congress to honor its promise to close the Southern Border back in 2006. Well, Mr. Priebus, it was the Republican Party that controlled the federal government from 2001-2006, and despite their promises to close the Southern Border, did NOTHING to actually do it. And you think a GOP-led Congress is going to do something about it now? What a joke! Most of the anti-amnesty Republicans are in the House, and they are not even a majority within their own caucus there. Try to name the anti-amnesty senators. The only ones I can recall who have been outspoken against amnesty are Jeff Sessions, Ted Cruz, and Mike Lee. Even Rand Paul has softened on the subject.

I wasn’t on the Tea Party conference call last Monday evening with Mr. Priebus when he said what he said, but I’m hoping someone on the call hollered, “There you go again.”