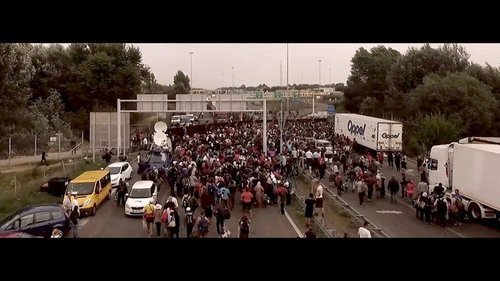 With Open Gates: Powerful Video Of The Invasion Of Europe

UPDATE: The video, as predicted,  was taken down, but we've reposted it.  Breitbart says that "After gaining a million and a half views in less than five days, the Open Gates video was taken down by YouTube following a copyright infringement. Although the rights company involved in the claim has been named in allegedly spurious claims in the past, there is no reason to suggest that is the case with this video. This article now links to a video mirror on Dutch website Dumpert."

This video, from YouTube Channel "The Death Of Nations" is a powerful compilation of European MSM video of the invasion:With Open Gates: The forced collective suicide of European nations.

This video will not be online long, download and mirror it while you can.

I gain nothing from this. Editing takes a lot of work and time, if you want to support me, you can do it with BTC at 1ybX49kKFNN7hKnrzaegnha4Fy9WrFATu

“A nation can survive its fools, and even the ambitious. But it cannot survive treason from within. An enemy at the gates is less formidable, for he is known and carries his banner openly."

You are witnessing what will be shown to future generations as the reason for the fall of an Empire.

At current immigration levels and disappearing birth rates native Europeans are destined to become a minority in their own countries within decades. This is already the case for many of Europe's largest cities.

Europeans have effectively lost their right to exist as cultures and nations in their own homelands and are facing extinction.

Millions of young Muslim men leave behind their family, pay thousands to criminal traffickers to reach the land they have been promised by European politicians illegally.

Dubbed by the media as "refugees", they cross through 6-10 safe countries to reach wealthy nations like Germany or Sweden where they hope to receive a better life at the expense of the taxpayer.

Only a fraction of them are Syrian, as they enter unfiltered, without any documents and without any legitimate right to claim asylum. Women and children are rarely seen, except in the cherry-picked sob stories of the media.

Any indigenous resistance of Europeans who refuse to hand over the countries of their ancestors to often radical and criminal Muslim foreigners is labeled "hateful", "racist", even "Nazi".

The level of cultural, moral and political subversion with egalitarian and Marxist ideologies has reached levels the KGB would never have dreamed of. Equality and tolerance are lies that serve none but a few.[More.]