Well, that didn’t last long. For a few hours, the Main Stream Media seemed like it would reflect on the results of the presidential election and embark on some serious self-examination about why it missed the rise of Donald Trump, the issues that animated his candidacy, and the vast swathe of Middle American voters who propelled him to a victory predicted by almost no one outside the Alternative Right. [Media Looks Inward After Donald Trump Surprise, by Steven Perlberg, Wall Street Journal, November 9, 2016]. The same people who had endlessly snarked about Trump’s supporters were shocked to discover the likes of Mike Cernovich, Bill Mitchell, Charles C. Johnson, Pax Dickinson, and others on the “Alt-Lite” and the AltRight understood politics better than they did [How Bill Mitchell Owned The Liberal Media, by Charlie Warzel, Buzzfeed, November 13, 2016].

But self-awareness isn’t the strong suit of the modern Left and shock quickly turned to rage. Rather than a Trump victory teaching the Left-MSM alliance some humility, it appears to have driven them insane

What has now commenced: Stage Two of the Long Election of 2016—the phase that will determine who the winner actually is.

The Left/ MSM has launched a three-pronged campaign to deny President-elect Donald Trump legitimacy, demonize and censor his supporters, and regain control of the Narrative (that power Steve Sailer calls “The Megaphone”).

The journalists who lied, sneered, and overtly worked to try to sabotage Trump are now whining that he won’t give them unlimited access to the President-elect so they can continue to try to destroy him.  [Frustrated and on edge at Trump Tower, by Hadas Gold and Peter Sterne, Politico, November 17, 2016]. Taking his family to a steak dinner without the press tagging along was presented as nothing short of a threat to the Republic, with Rachel Maddow complaining about a threat to “tradition” and the White House Correspondents’ Association (hopefully soon to be abolished) calling it “unacceptable” . [The Media is furious that Trump ditched them to go eat a steak last night, by Kaitlan Collins, Daily Caller, November 16, 2016]

But why should Trump regard “journalists” as anything other than far Left activists? What respect are they owed?

Consider the current campaign against Steve Bannon, the head of Breitbart.com, Trump’s campaign manager and President-elect Trump’s Senior Advisor.  It is baldly stated by the so-called legitimate press that Bannon is not just a racist but a “white nationalist,” and, even more astonishingly, an “anti-Semite.”

The heart of the case isn’t anything that Bannon himself has said or done. Indeed, the only evidence we are given is from his ex-wife in a child custody hearing in which Bannon allegedly said he didn’t want his children going to a school with too many Jews [Anti-Semitic Trump campaign CEO Stephen Bannon not a big fan of “whiny brat Jews”, ex-wife says, by Nancy Dillon, New York Daily News, August 27, 2016]

Bannon denies it and such a source is hardly reliable. Anyway, it’s hardly a statement of “hate.” How is it different than a Jewish parent saying he wanted to send his or her children to a Jewish school instead of an establishment filled with the goyim?

Yet the stunning assertion Bannon is a “white nationalist” and an “anti-Semite” proceeds all but unchallenged in the MSM. What we are witnessing is “gaslighting” on a massive scale, the repetition of a demonstrably false charge to deliberately deceive. Thus, in the mobs being whipped up against the legitimately elected President-elect by the MSM, people who had never heard of Steve Bannon a weak ago are now comfortable calling for his death in protests and on social networking.

This is especially remarkable considering the MSM’s new crusade against “fake news,” their favored explanation of why their preferred candidate lost the last election.

In truth, there is a lot of annoying fake news on social networking, with absurd clickbait stories about Pope Francis or Denzel Washington supporting Trump or some other event which never happened [This Analysis Shows How Fake Election News Stories Outperformed Real News On Facebook, by Craig Silverman, Buzzfeed, November 16, 2016].

But who determines what is “fake news”? It’s just as absurd to declare Breitbart.com “white nationalist” is it is to claim Taylor Swift is secretly campaigning for Donald Trump.

The big difference: America is required to take the fantasies of Leftist journalists seriously, but not those of grassroots conservatives.

There is no legitimate reason why Eric “My People” Holder must be treated as a legitimate post-racial figure worthy of respect and Jeff Sessions is not, other than that Leftist journalists agree with the politics of the former and not the latter. There is quite a bit of evidence to suggest community organizer Barack Obama, the acquaintance of Bill Ayers and the parishioner of Jeremiah “God Damn America” Wright, has quite a few more direct “links” to radicals than Donald Trump does. Yet it feels embarrassing to make this argument because we know no one will take it seriously.

Stage Two of the Long Election supremely a media war. Bannon is being criticized for supposedly legitimizing the Alternative Right by publishing Milo Yiannopoulos and Allum Bokhair’s survey “An Establishment Conservative’s Guide To The Alt-Right” [Breitbart, March 29, 2016]. The irony is this article tried to explain away the Alt Right as not a racist movement.

The writers pointed out:

For decades, the concerns of those who cherish western culture have been openly ridiculed and dismissed as racist. The alt-right is the inevitable result. No matter how silly, irrational, tribal or even hateful the Establishment may think the alt-right’s concerns are, they can’t be ignored, because they aren’t going anywhere. As [Jonathan] Haidt reminds us, [ What Makes People Vote Republican?, Edge.org, September 8, 2008] their politics is a reflection of their natural inclinations.

Indeed, the writers’ contention the Alt Right is “trolling” or joking about racial issues actually led to condemnation by many white racially-conscious writers.

The MSM adopts the most extreme characterization of the Alt Right as an inherently racist movement and then dishonestly assigns it to Breitbart and Bannon.

Simultaneously, genuine Alt Right voices, such as Richard Spencer, are being banned by Twitter. MSM Journalists, compulsive censors and volunteer commissars as they have become, are cheering these bans [Twitter is banning racist “alt-right” leaders. It should explain exactly why, by Will Oremus, Slate, November 17, 2016].

And true to its modern role as a cuckservative Judas Goat existing only to help Leftists win, National Review is urging the purge on.

Those of us on the right spend our time trying to loosen the very real clamps that exist on speech, for instance, on university campuses. And that’s important work. DePaul University has the right to forbid Ben Shapiro from speaking, as it did this week. But conservatives oppose DePaul’s doing so because they object to the idea that Ben Shapiro is somehow morally beyond the pale. He’s not. He’s a mainstream conservative, working within a delineable tradition of conservative thought.

It doesn’t follow, though, that because Shapiro should be allowed to address DePaul students, so should Jared Taylor. Just because we should not draw the line at Shapiro doesn’t mean we shouldn’t draw a line anywhere.

Of course, if the supremely rational and well-mannered Jared Taylor of American Renaissance is “beyond the pale,” then it is useless to pretend there even is a public debate or any meaningful difference between the likes of Slate and Conservatism Inc. 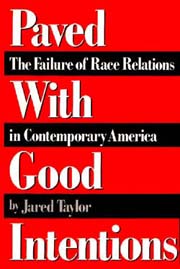 (Nostalgia note: Jared Taylor’s book Paved With Good Intentions: The Failure Of Race Relations In Contemporary America was boosted to best-sellerdom by a 1993 review by Peter Brimelow in…National Review.)

Trump has humiliated the MSM. This has caused them to redouble their efforts at thought control. The MSM is the real source of power in American politics. If you come at the king, you better not miss.

Trump should delegitimize the MSM, ignore its reporters, and do what he can to provide access to alternative media.

He should also, as he occasionally hinted in his campaign, break up the major media companies and nationalize social networking sites such as Twitter and Facebook as utilities.

There will only be one shot at this. In the wake of Trump’s election, it is clear the MSM intends never to allow this happen to again.

MSM “journalists” aren’t defenders of free speech. They are its greatest enemy. If Trump actually became the autocrat they fear and shut them down, we would be more free than we are today.