The Jessica Chambers Murder: Mississippi Authorities Have a Suspect!

There’s good news and bad news, regarding the Jessica Chambers murder case. The good news: the authorities have a suspect! The bad news: because they don’t have enough evidence to make a case stick in court, they haven’t arrested him.

On December 6th, 2014, white 19-year-old, Jessica Chambers was murdered in one of the most horrific ways known to man: Someone burned her alive, as she sat in her car on a rural road in Panola County, Mississippi. Ninety-eight percent of her body suffered second and third-degree burns. As her father, Ben Chambers Sr. said, the killer or killers burned everything but the soles of her feet. She was medevacked to hospital, but nothing could be done and she died at 2:37 a.m. on December 7.

VDARE.com Editor Peter Brimelow sicced me on the story, and I burned up the telephone lines between New York City’s Rockaways and Panola County, but no one knew anything.

This was not the Knoxville Horror, where local authorities knew plenty, but stonewalled me for months on end, while misrepresenting the atrocity as having nothing to do with race. In Panola County, the authorities—local, county, state and federal—really seemed to have nothing. In recent months they’ve been saying that there’s not even any street chatter, or at least nothing credible, about the Chambers murder. And this in a rural area where everybody, black and white alike, knows each other.

Despite its sensational nature, the Jessica Chambers case has been plagued by national Main Stream Media silence. Clearly, the MSM were afraid that the Chambers murder would be another one of those “non-existent” black-on-white hate crimes.

And yet, the story grew legs. A grassroots movement spread word of the short, unhappy life of Jessica Chambers, via Facebook, VDARE.com, The Last Refuge, and others. 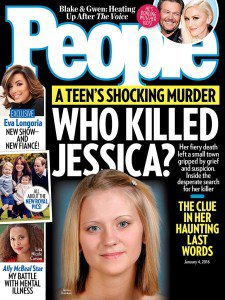 Then, after more than a year, People Magazine devoted its January 4, 2016 issue to the case, putting Chambers’ photo on the cover where it was seen by millions of people across the country. People’s team of three included crack crime reporter Christine Pelisek [Who Killed Jessica? [teaser] By Sandra Sobieraj Westfall, Alexandra Rockey Fleming, and Christine Pelisek, People, January 4, 2015.]

People still follows the anti-social practice of not putting its content online for free (unlike VDARE.com—donate here!) so I had to buy the treezine. The most notable aspects of its coverage: coming up with a timeline which aims to show where Jessica Chambers was up until practically the moment of her murder; and interviewing three different people who spoke for attribution, all of whom said that Chambers was consorting with drug dealers such as Travis “Travo” Sanford.[Pictured below] (Sanford was in prison at the time of Chambers’ murder).

Chambers’ earlier black ex-boyfriend, Bryan Rudd also emphasized the drug dealers: “Jessica wasn’t a one-guy type of female, and I think she was making friends with the wrong people, with drug dealers. But she did nothing that bad to get herself burnt alive.”

(People did not report Chambers’ own stay in a drug-testing-mandatory “women’s restoration home”—Jessica Chambers’ mother: teen working to improve herself before her death, by Caitlin Alexander, WREG-TV, January 15, 2015).

Family friend Jordan Bryant told People: “She hung out with the wrong dogs.”

Since the drug dealers were black, People’s scenario implied Chambers’ killer was black.

(Which may not have been what People expected to find when it started its investigation—there had been some speculation Chambers had been murdered by “white supremacists” for sleeping with blacks).

On December 15—presumably after People went to press—news broke of 17 arrests (not all on the same day), apparently all of black men, in the Panola County area, in Operation Bite Back. 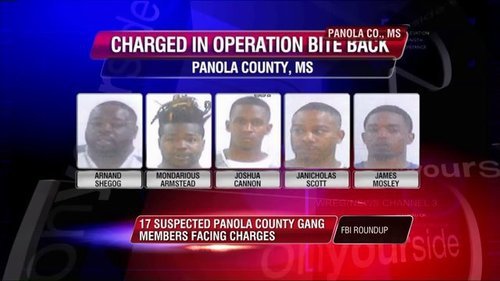 (I could only find the five mug shots above.)

Not one of the arrests was for the murder of Jessica Chambers, yet they were all offshoots of the Chambers investigation [Seventeen Panola Residents Indicted, Nine Arrested in Operation Bite Back, FBI Press Release, December 15, 2015.]<

My hunch: law enforcement had also been looking for a pretext to light a fire under local black gangs, without having to brave a storm of racial sabotage from the likes of AG Loretta Lynch and the national MSM. They shook the trees, and lots of low-hanging fruit fell down:

JACKSON, Miss. — An investigation into the death of a teenager burned alive last year has resulted in the arrests of 17 men — but none has been charged with killing Jessica Chambers, the FBI said Tuesday….

Since the killing, authorities interviewed more than 150 people and sorted through more than 20,000 phone records trying to find her assailant, Panola County Sheriff Dennis Darby said. That's when investigators turned up evidence of other suspected illegal activity ranging from narcotics sales, possession of stolen firearms and possession of counterfeit currency.

FBI agents targeted suspected members of the Black Gangster Disciples, Vice Lords, and Sipp Mob street gangs and began arrests at around 4 a.m. CT in Oxford, Miss. The men arrested ranged in age from 18 to 40 and have been indicted on for federal and state crimes….

A team of investigators from the Panola County Sheriff's Department, Mississippi Bureau of Investigation, the Bureau of Alcohol Tobacco and Firearms, and the U.S. Attorney's Office still are digging into Chambers' death. A lack of street chatter has made the case a tough one to crack, authorities have said, causing much of the investigation to hinge on data collection.

Note that the Clarion-Ledger’s Therese Apel reported in her lede that none of the new arrests was for the Chambers murder. But, weirdly, MSM outlets, left and right, have conjured up a soft hoax, whereby the arrests were “linked” to the Jessica Chambers case

While big-name outlets, left and right, hyped stories they didn’t have, a little mom-and-pop (literally) newspaper in Panola County outdid everyone. After the arrests, The Panolian (Batesville MS) reported accurately:

Although connected with the Jessica Chambers investigation, investigators say the operation is not connected to her murder.

John H. Howell Sr., the publisher of The Panolian, graciously agreed to speak with me. Howell underscored the importance of the timeline that People’s reporters had reconstructed. No one had previously been able to map the last interactions in the life of Jessica Chambers, before her killer immolated her.

Howell: “They did the best job with the timeline of anybody I’ve seen. And to us here that was the first indication we had that they knew who Jessica was with from 6:30-7:32. We haven’t any more than that, but it took People magazine to find that out for us.”

VDARE.com: So you think that’s from law enforcement that they got that information?

John Howell and many other observers had believed that the suspect was a man by the name of Roger Lynn Hentz (right). According to Howell, Roger Lynn Hentz was “hardcore,” a lifelong junkie, probably drug dealer, and “petty criminal” who had spent much of his life in and out of prison. Jessica Chambers apparently sold him fake drugs.

But Hentz died last fall, at 54 years of age—online, you’ll only find rumors that his death was due to liver cancer; Hentz’ family reportedly requested that there be no obituary in The Panolian—and authorities determined that he was not the mysterious passenger in Jessica’s car from 6:30 until 7:32 p.m.

Nevertheless, Howell told me the authorities believe they do know who that passenger was—and hence who Jessica Chambers’ killer is:

VDARE.com: So, they definitely have a name.

However, the authorities don’t think they have enough evidence yet to make a case stick. They’ve said nothing about his race, ethnicity, age, size, or where he’s from. All they’ve said is that her killer was a man.

Life is hard; it’s harder, when you’re stupid. When I was young, I was plenty stupid. Maybe I still am.

But when you’re stupid, you need luck, and maybe divine intervention on your side. Jessica Chambers had neither.

Let’s hope the investigators working her case will be luckier than she was.