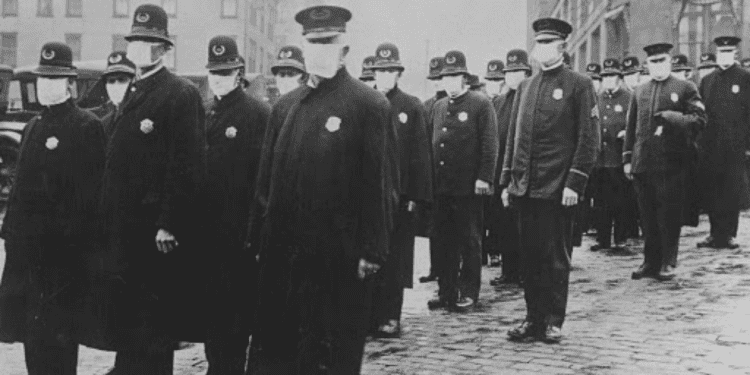 From Proceedings of National Academy of Sciences:

… We show that city-specific per-capita excess mortality in 1918 was significantly correlated with 1917 per-capita mortality, indicating some intrinsic variation in overall mortality, perhaps related to sociodemographic factors. In the subset of 23 cities for which we had partial data on the timing of interventions, an even stronger correlation was found between excess mortality and how early in the epidemic interventions were introduced. We then fitted an epidemic model to weekly mortality in 16 cities with nearly complete intervention-timing data and estimated the impact of interventions. The model reproduced the observed epidemic patterns well. In line with theoretical arguments, we found the time-limited interventions used reduced total mortality only moderately (perhaps 10–30%), and that the impact was often very limited because of interventions being introduced too late and lifted too early. San Francisco, St. Louis, Milwaukee, and Kansas City had the most effective interventions, reducing transmission rates by up to 30–50%.

Philadelphia had about twice the death rate of St. Louis. This is often blamed on a very popular war bond parade held in Philadelphia on September 28, 1918 for which 200,000 turned out. Within days, the hospitals were overflowing.

My assumption would be that overflowing the hospitals would be worse in 2020 than in 1918 due to hospitals being able to do a lot more today.

… We would be left with other measures, now termed “nonpharmaceutical interventions,” to stave off the worst effects of a pandemic until a vaccine could be produced and widely administered (4, 5). Because many of these interventions, such as closing schools or shutting down mass transit, could be very disruptive to society, it is important to use effective measures in a rational way. But which measures are most effective, and how should they be applied? Do any nonpharmaceutical interventions actually help? Until now, there has been very little systematic examination of these questions. However, different U.S. cities showed marked differences in influenza attack rates and mortality in 1918. Some cities, St. Louis for example, appeared to have weathered the pandemic with far fewer excess deaths than others (6, 7). What distinguished the severely afflicted cities from those that were less heavily stricken? As it happens, different cities took different approaches to implementing interventions. These differences constituted natural experiments and offer an opportunity to address important questions concerning nonpharmaceutical interventions by using the historical data.

Nonpharmaceutical Interventions in 1918
A variety of interventions were available in 1918, from wearing surgical masks to “social distancing” measures (as we call them today) that ranged from closing schools and prohibiting public gatherings to isolating sick people in hospitals or encouraging them to stay home. Most of the interventions then available are identical to the measures that would be considered today (8). Both articles reach similar conclusions, using complementary methods. In the 1918 pandemic, no single intervention was sufficient, although some interventions were more useful than others. As might be expected for a respiratory infection, closing schools, churches, and theaters, for example, appeared to be among the most effective measures. Four or more such interventions implemented at the same time were more effective than only one or two and were more effective than multiple interventions started at different times (6).

Of course, this activity might also be a proxy for how seriously a city viewed the pandemic. Nevertheless, there were significant differences. Timing was especially critical. Both articles demonstrate that these measures were far more effective if applied early and maintained as long as possible. Cities that put several measures in place early (before the cumulative excess death rate reached ≈20–30/100,000 population) experienced peak death rates that were approximately half of those seen in cities that started their interventions later. The authors note that few cities maintained the interventions for >6 weeks, approximately the time it took for one wave of the pandemic to pass through the area. Influenza returned when the interventions were relaxed. Pandemics have tended to come in waves, so a city could implement effective measures and avoid the first wave, only to relax them and be hit by the next.

Bootsma and Ferguson (7), in fact, make the interesting argument that escaping the pandemic entirely may not be the most advantageous strategy because it only leaves everyone susceptible to infection later. How does one keep up the necessary caution for what may be months or longer? Experiences from 1918 suggest that it was possible to get reasonable compliance with precautionary measures for a while, but not indefinitely, even in the more obedient social climate that prevailed in 1918. San Francisco had demonstrations in which citizens defiantly tore off their own masks (9).

Obtaining long-term compliance is likely to be even more difficult today, although there was a relatively high level of public compliance with recommended infection control measures during the severe acute respiratory syndrome (SARS) epidemic in Toronto. These experiences suggest that, although it is difficult to maintain compliance, it is not impossible.