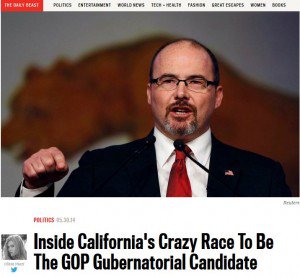 The Leftist Daily Beast just had some kind of fit—channeled, typically, by the California GOP Establishment—about potential GOP Gubernatorial candidate Tim Donnelly being caught, two years ago, accidentally carrying a gun on a plane.

Will California nominate a vigilante, busted boarding an airplane with a loaded gun, as the Republican alternative for Governor?

To defeat a popular incumbent Democratic governor this November, who will California primary voters choose as an alternative??

A social libertarian responsible for helping avert the worst of the financial crisis—or a former vigilante on the Mexican border who got busted trying to board an airplane with a loaded gun two years ago? It seems likely that primary voters will go with the latter on Tuesday.

Inside California's Crazy Race To Be The GOP Gubernatorial Candidate, By Olivia Nuzzi, May 30, 2014

If you don’t own a gun, you may not realize how easy this is to do. If, for example, you have a daypack that you take to go fishing, and pack sandwiches and a thermos in, well, of course you throw in a .22 pistol and box of rounds to go plinking.

Then, when someone says you have to fly somewhere to give a speech, you pick up the same bag to carry your speech, your iPad, and a paperback to read during the period when you’re not allowed to use your iPad.

And when you put the bag on the conveyor, you get a hell of a shock.

“How many times have you walked out of your house and forgotten your keys? Or left your coffee on the table? Or walked out of your office without your computer?” Donnelly’s campaign spokesman, Art Haynie, asked me. “He just grabbed the wrong bag.”

Donnelly is from Georgia and volunteered with the Minutemen to guard the border—presumably with a rifle, like everyone else—in 2006.

Carrying a gun is normal for him. Unfortunately, he was talked into pleading guilty and getting probation for the TSA violations. (A good lawyer might have gotten the charges dropped.)

Running while on probation has its risks. In February of this year, Donnelly seemed to have violated the terms of his probation when he fired a Glock 19 handgun at an indoor gun range. Donnelly laughed the incident off on a radio show, saying, “It’s considered rude if you don’t fire someone’s gun when it’s offered to you.” Haynie assured me that the terms of Donnelly’s probation state that while he cannot carry a gun, he can, in fact, shoot someone else’s.

The chief “risk” of “running while on probation” is that Donnelly is now, by law, required to be unarmed. Like all conservative patriot politicians, he’s in danger of violent attacks (Tom Tancredo used to wear a bulletproof vest). In particular, since Donnelly’s an immigration patriot in California, he’s in danger from the organized mob violence I’ve been referring to as “Minority Occupation Turbas”—they have shown up at the homes of Kris Kobach, Karl Rove and (for some reason) Eric Cantor.

As a candidate in a state race, Donnelly doesn’t get any Secret Service protection, or even the State Police guard the actual governor gets.

So he should be carrying a gun.

If Bobby Kennedy had thought of that, Sirhan Sirhan wouldn’t be sitting in a California prison having parole hearings every five years.

The Daily Beast should not, in fact, be publicizing the fact that Donnelly is unarmed, especially since its readership includes a lot of crazy people. But it’s not doing it maliciously, it just has no concept of self-defense.

The typical Daily Beast writer/reader’s plan for self-defense: live in a white neighborhood in a building with a doorman, and if there’s any problem, call the police. But, if in spite of this you are attacked and survive, don’t, when you’re telling anyone about it, say what color the attacker was. (See here and here for concrete examples of that—otherwise you’ll think I’m making it up.)

Of course, Nuzzi [Email her] could have Googled accidental TSA infractions just like I did. Instead, her article is what we call a point-and-splutter attack—i.e. an attempt to stampede through emotion rather than rational refutation—combined with a little guilt-by-association, and some demographic triumphalism.

a former member of the controversial Minuteman Project, a vigilante group which set out to patrol the U.S.-Mexico border. The Southern Poverty Law Center charged that the group was heavily-armed and allowed “some neo-Nazis and other racists” to join.

It’s weird, but a typical point-and-splutter ploy, to say that that the SPLC ($PLC to VDARE.com) “charged” that the Minutemen were armed—the Minutemen said they were armed, they asked for armed volunteers, they wouldn’t have accepted anyone foolish enough to patrol the border unarmed.

The claim that Tim Donnelly was doing something suspect because he joined a group that, some said, was also joined by someone bad, who was allowed, by who knows who…is the kind of guilt by association that always reminds me of “this is the dog that worried the cat that chased the rat that ate the malt….”

To blame the weakened state of the party on “any one campaign or politician,” Madrid told the Daily Beast, would be “easy, but inaccurate.”

“It’s really important to understand that no state has undergone the significant demographic transformation that California has, and that’s undeniably driving the political outcome of the races we’re seeing.

“Latino voters are younger, they’re poorer and they more recently migrated than the rest of the population.”

The GOP’s inability to put forth a viable candidate for Tuesday’s primary is a symptom of an ailing state party, Madrid said—and it will take time to fix it “This has been 20 years in the making. It’s going to be at least four or six years before you start to see any [Republican] rebirth, if it’s going to happen at all.” After all, he added, “Demographics are destiny.”

We can agree with Mr. Madrid that demographics is destiny. But the immediate problem in California is that its idiot GOP leadership is too corrupt or cowardly to rally the white a.k.a. American vote—remember, no recent Establishment candidate has done more than break even among California whites.

And how much immigration a state or country allows is a matter of political choice.

But ultimately, of course, how much and what kind of immigration the U.S. allows will indeed determine whether Americans like Tim Donnelly will keep their gun rights—and whether they'll one day need their guns for self-defense.