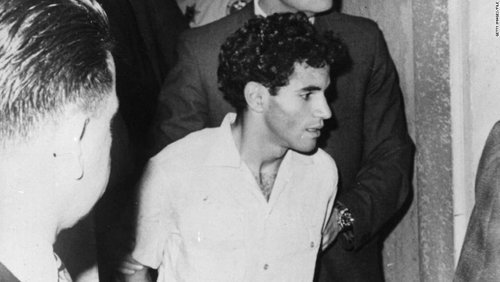 RFK Remembered—Immigration Not So Much

Today is the 40th anniversary of Robert F. Kennedy's death at the hands of Palestinian immigrant Sirhan Sirhan. A Google News search for Kennedy and Sirhan turns up about 295 results. A Google search for Kennedy and Sirhan and immigrant…turns up about 21. Sirhan Sirhan emigrated to the United States in 1956, and was a fanatical Palestinian nationalist, although he was raised as a Maronite Christian, and was a citizen of Jordan. His crime is an obvious example of the “dark side of diversity.” Here's what Peter Brimelow said about him in the Afterword to Alien Nation.

For example, Jacquie Miller in the Ottawa Citizen worried—all too presciently, for what it is worth—that “phrases can be plucked out of Brimelow’s book that, shoved only slightly out of context, provide ammunition[for the inevitable charge of racism] She instanced my references to high black crime and Laotian welfare rates. Miller also felt that the “credibility” of my account of Robert Kennedy's ludicrous underestimate of Asian immigration resulting from the l965 Act (p. 78) somehow suffered from what she described as “a typical slur”: my adding that “tragically, Robert Kennedy himself was to be assassinated by an immigrant counted by the INS as Asian.”

My first reaction to this sort of thing, of course, is incredulity. I believe truth should be an absolute defense, as it is in libel law. Laotians do have disproportionately high welfare rates etc. And I said “tragically.” didn ‘t ?’

Still, I recognize a problem. There is no point in repelling readers, at least those who show Ms. Miller’s symptoms of open-mindedness.

The problem, however, is not easily resolved. The truth, we are told after all, shall set us free. And it is precisely because of the media’s flinching from facts that many Americans are unaware of the immigration dimensions of major contemporary public policy dilemmas. It is because Americans are never reminded of the Jordanian origins of Kennedy’s assassin, Sirhan Sirhan, that they don’t think to put him at the head of a list of infamous immigrants to counter the immigration enthusiasts’ silly ploy of reeling off, in place of argument, the names of distinguished immigrants. In fact, many Americans can’t think of a list of infamous immigrants at all—another example of the one-way nature of the immigration debate.

The LA Times reprints an article by Steve Lopez, in which he interviews Juan Romero, who as a young busboy at the Ambassador Hotel, comforted the dying Kennedy, and actually manages to put a pro-immigration spin on it.

Juan was convinced he was supposed to find a way to express the hope Kennedy represented for him, but he couldn't find the words. During the debate over California's Proposition 187, he felt that people were taking one look at his brown skin and figuring him for a freeloader. He wanted to scream that the ballot initiative was proof we needed another Kennedy, but he couldn't find a stage.