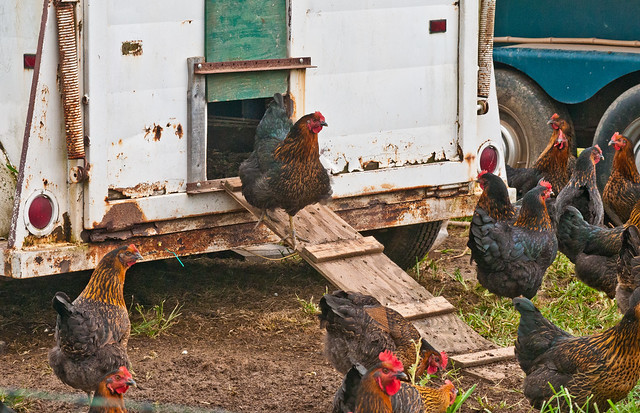 The Fulford File | Do Hipsters Or Hispanics Keep Chickens In The Front Yard? SLATE Knows (But It’s Not Saying)!

Slate has an article on the disturbing trend (and it is a little disturbing) towards "Backyard Butchery." [The Butcher Next Door  Why the rise of DIY urban animal slaughter is bad for people and animals, by James McWilliams, June 6, 2012]

This backyard butchery isn't weird murders or amateurish abortions. It's literal butchery—the process of turning pigs, goats, and chickens into pork chops, goat stew, and barbecued chicken. Slate presents this as a fad among the granola-loving hipsters typical of Stuff White People Like.

The SWPL list includes Organic Food, Farmer’s Markets, and Picking Their Own Fruit. So killing a chicken is not an impossible extension.

Urbanites are starting to keep and slaughter their own farm animals

These urbanites are white:

…hip urban dwellers intent on controlling the food they eat. Urban farming has been happening as long as there have been urban centers, but only recently has it started to reincorporate animals into city space (something Americans stopped doing in the late 18th century due to sanitation concerns). The process began with egg-laying hens, which are now legal for residents to keep in most major cities in the United States. Now, however, urban uber-locavores want to eat (and sell) not only eggs but also the chickens themselves, not to mention rabbits, ducks, goats, and even pigs.

McWilliams [Email him] lists some things that are wrong with this:

Which leads to another objection:

McWilliams briefly notes that fans say this trend can "empower ethnic groups to maintain cultural traditions." But otherwise, he makes no mention of anyone other than whites.

But it turns out that the “Southern California backyard butcher,” unnamed on both Slate and on the Gentle Barn website, is actually one Roberto Celedon ['Backyard butcher' sentenced to 90 days, Santa Clarita Valley Signal, May 24, 2012]

And that's to be expected. Because keeping pigs, chickens, and goats in the city, and killing them yourself, is almost entirely a minority activity.

And, although Chinese, Haitian, and other minorities have urban livestock, the overwhelming majority of urban pigs, chickens, and goats are owned by Mexicans.

That is, the recent immigrants from Mexico—largely from rural districts—who are taking over American towns and cities.

VDARE.com has reported this repeatedly:

Many of McWilliams’ hipster butchers sound disturbingly bloodthirsty—one guy says “the thrill of killing your own food is an exhilaration better than skydiving."  Unlike normal farm kids and hunters in AmericaLand, they've never killed anything before. And they find it thrilling. Bloodthirsty hipsters can be dangerous: Think Jonestown, and the Manson Family.

But Mexicans already have a culture of bloodthirsty contempt for animal welfare. Bullfighting and cockfighting are popular sports there, and consequently illegal cockfighting has now arrived in America, since gamefowl are more portable than bulls.

Could Slate criticize that? No, it could not.

Exactly the same article could have been written about Mexicans rather than hipsters. But Slate, edited by Jacob Weisberg, has a tradition of political correctness that is stunning.

And it is officially racist, according to the Southern Poverty Law Center–$PLC to VDARE.com—to mention pigs and chickens when talking about Mexicans.

ANDERSON: The guy who lives up the corner from me, from El Salvador, he dug up his whole front yard. They got rows of corn growing in their front yard. It's about two feet high right now. Corn! Rows of corn. Are you listening to me?

The guy two doors from him has about 20 chickens in the backyard and once a day he opens the gate and lets them out. In the next block from me, there's a goat tied up in the backyard. They wash their clothes and hang them on the front fence — not even on a clothesline. Each house has five, six, seven cars, so there's nowhere to park. Yeah, that has nothing to do with economics, but it makes it hard to live.

And then there's the parties. These mariachi parties, where they bring live musical bands in their backyards and play just as loud as they can play until 2, 3, 4 o'clock in the morning. Graffiti on everything. All the billboards in my neighborhood are now in Spanish. I'm talking Kellogg's, Ford, Toyota, GM, Seagram's, Coors, Budweiser, you name it, it's in Spanish. None of that is economics. It's all cultural, and it's a problem.

[$PLC’s Intelligence Report interviewer]: Aren't you playing toward negative stereotypes about Mexicans? Is it really fair to say all Mexican and Central American immigrants have goats and chickens in their yards? [Emphasis added]

There you have it—the official anti-racist attitude: Terry, who was 1) black and 2) lived near immigrants, was talking about chickens, goats, and corn he had 3) actually seen on his street.

And the interviewer was asking him " Aren't you playing toward negative stereotypes about Mexicans?"

No, the $PLC is playing toward negative stereotypes about Americans. And Slate is playing along.