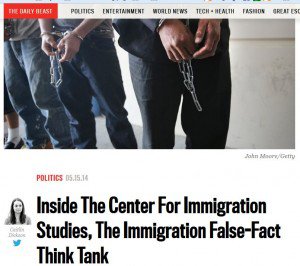 The Center For Immigration Studies’ revelation of the Obama Regime’s release from immigration detention of tens of thousands of deportable criminals, including armed robbers, rapists, and 193 murderers, is a prodigy of investigative journalism, devastating to the cause of Amnesty, which requires GOP cooperation and grassroots somnolence. [ICE Document Details 36,000 Criminal Alien Releases in 2013, By Jessica Vaughan, May 2014]. Consequently, regime enforcers like the DAILY BEAST have attacked CIS and its director, Mark Krikorian with the usual “guilt-by-association” smears. [Immigration's False-Fact Think Tank, By Caitlin Dickinson, [Twitter] May 16, 2014.]

Starting with the title—all “facts” provided by CIS are true—Dickinson’s article is an example of what logicians call "Poisoning The Well".

Dickinson notes that “conservative media” featured CIS’ report and that the liberal media (a.k.a. the MSM) ignored it. Calling the CIS a “questionably nonpartisan” source (unlike The Daily Beast!) she repeats that one of CIS’s founders was citizen-activist Doctor John Tanton and (of course) bashes Numbers USA, and FAIR, because Dr. Tanton also had a hand in their founding. She quotes an MSM attack on Krikorian:

As a testament to Krikorian’s, and CIS’s influence in D.C., a June 2013 Washington Post profile entitled, “The Provocateur Standing in the Way of Immigration Reform,” reframed the question of whether immigration reform can pass as, “Can Mark Krikorian be stopped?”

Then she gets into the $PLC dirt:

Krikorian, the SPLC claims, has been known to “hobnob with extremists.” According to the SPLC, Krikorian accepted an invitation to speak alongside known Holocaust denier Nick Griffin and so-called “racial realist” Jared Taylor at the Michigan State chapter of Young Americans for Freedom in 2007, despite the group having recently made news for orchestrating such offensive events as “Catch an Illegal Immigrant Day,” a “Korean Desecration” competition, and covering the campus in “Gays Spread AIDS fliers.”

(By the way, Ms. Dickinson, who appears from her picture to be about 12, or possibly 14, can’t spell. I’m sure the Michigan State Chapter of YAF, as it was constituted in 2007, wouldn’t think of desecrating Koreans. What they were desecrating, of course, was what Obama likes to refer to as the “Holy Koran.” This is their right under the First Amendment.

(I’ll also mention that, if you’re going to be an immigration pundit, you should learn how to spell immigration. She spells it both “Immigraiton” and “immgration.” She also can’t spell ophthalmologist, which is what Dr. Tanton was when he was practicing, but that’s less important.)

I mention all this because Dickinson comprehensively doesn’t get it on the subject of immigration. She finds the CIS’s slogan “Low Immigration, Pro Immigrant” to be “puzzling” and says while Mark Krikorian, whose parents were from Armenia, didn’t learn English until kindergarten, he was “paradoxically an early opponent of the movement toward bilingual education”.

Let me explain: mass immigration is as bad for the (legal) immigrants who are already here as it is for Americans.

There’s nothing “paradoxical” about someone who learned English in kindergarten opposing “bilingual” education, which would have prevented him from learning English. (Krikorian writes reports, Op-Eds, and testifies before Congress because he wasn’t made to take “bilingual ed”.)

Ms. Dickinson believes ICE’s spokesman Gillian Christiansen who says that CIS “failed to address” many things that it actually did address. And after calling CIS, which fought the Bush Administration for eight years, as “questionably nonpartisan”, she describes the far-Left Migration Policy Institute as a “a nonpartisan think tank”.

If MPI Director Muzaffar Chishti, whom she quotes, is nonpartisan, then so are Al Gore and the heads of La Raza and the NAACP.

MPI, which was established in 2001 by “Kathleen Newland (a former senior associate at the Carnegie Endowment for International Peace) and Demetrios Papademetriou (former director for immigration policy and research in President Bill Clinton's Labor Department)” according to its page at Discoverthenetworks.org (a watchdog organization not nearly as much quoted as the SPLC) is wildly radical, even by the standards of the Democratic Party.

And that brings me to my main point. In a column called Communism, Socialism, Cultural Marxism, Democratic Hegemonists, Crony Capitalism, Ethnic Agendas, Treason Etc.—The “Ugly Roots” Of Immigration Enthusiasm, I demonstrated that the other side of the immigration debate has many things wrong with it that are never investigated by organizations like the Daily Beast.

I put them under eleven heads:

But they never get investigated—except at VDARE.com.