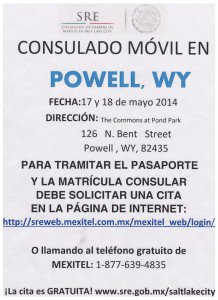 Immigration patriot Frank Jorge, a 2011 refugee from immigration-blitzed southern California now living in Basin, Wyoming, about 60 miles from Powell, spotted the above flyer at both his local post office and convenience store. He found another posted at the supermarket in nearby Greybull. Presumably they’ve been plastered all over the greater Powell metropolitan area [see map]. 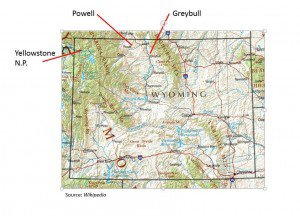 Mexican matricula consular cards are coming to Wyoming this weekend, May 17 and 18! A crew from the meddling Mexicans’ consulate in Salt Lake City will be peddling their wares at The Commons at Pond Park in the City of Powell. Even if you can’t read Spanish, you can make out the story in the flyer shown: Passports and matriculas will be available.

Using Google to translate, we also learn that appointments are necessary and that they’re free. (If you’d like to have a little fun with their system by making your own free appointment, here you go: MEXITEL online appointment scheduling service. It’s in English … and you can always be a no-show!)

So what’s a Mexican matricula? And why the fuss?

In brief, a Mexican matricula is a photo ID (including bearer’s name and U.S. address) issued by Mexican consulates in the U.S. to Mexican nationals residing here.

Or, more accurately, issued to people whom Mexican consular officials choose to believe are Mexican nationals, which isn’t the same thing: As immigration-patriot extraordinaire Hal Netkin explained to me:

“There are many ways to beat the system. For example, someone who was, in fact, born in Mexico and who has a genuine birth certificate—those born in remote rural areas often don’t—can get multiple copies by mail and sell his extras on the black market in Los Angeles. Then a purchaser can go to a Mexican consulate and use the genuine birth certificate to get a matricula in that other person’s name, since the consulate folks have no way of knowing exactly whom they’re talking to.”

In a wry must-see fact sheet that Netkin created years ago, he pointed out one limitation on that particular scam:

Q. What if I am an Anglo Criminal. Can I still get a Mexican ID?

A. Technically, yes. But unlike our local authorities, the Mexican Government profiles. The Consulate might get suspicious if you have blond hair and blue eyes.

Then there was the case reported in the Denver Post on October 10, 2002:

"One guy we arrested recently had three different matriculas with three different names. It was his picture, issued through the consulate," said Scott Weber, deputy director for the Immigration and Naturalization Service in Denver.

That incident of one illegal carrying multiple matriculas bearing the same photo and different names—all genuine, remember— is far from unique.

Additionally, counterfeit matriculas are widely available. I carry one—procured for me in 2004 near downtown Los Angeles by the street-wise Netkin—for use whenever I have an opportunity to explain matriculas to clueless Americans (i.e. almost everyone). 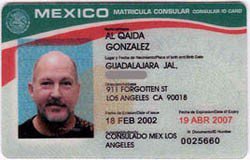 It’s clear, then, that Mexican matriculas are, technically speaking, worthless as IDs.

So who would want one? Illegals! As CIS’s Dinerstein explained:

The matricula consular is useful in the United States only for illegal aliens, since legal immigrants, by definition, have U.S. government-issued documents” [i.e. visas for visitors and green cards for legal permanent residents].

Still, why would illegal aliens want them? The chicanery that may be involved in obtaining a genuine matricula, and the easy availability of counterfeit matriculas, wouldn’t matter—if U.S. entities refused to accept matriculas as valid IDs. Then they’d be mere curiosities, of no concern to immigration patriots.

But as Dinerstein noted in her CIS backgrounder in early 2003:

The Mexican government has launched an aggressive grassroots lobbying campaign to win acceptance for its matricula card from state and local jurisdictions and from banks, especially in areas where Mexican illegal aliens are concentrated.

While many [American] jurisdictions have resisted pressure from the Mexican government, others have not; the matricula is now accepted by 800 local law enforcement agencies and 74 banks, as well as by 13 states for purposes of obtaining a driver’s license.

(For example, if Oregon’s voters fail to defeat the driver-cards-for-illegals referendum this November, then Mexican matriculas will suffice as IDs in applying for the driver cards.)

In other words, the matricula consular is a deliberate attempt by the Mexican government to undermine the sovereignty of the US—its ability to distinguish illegal aliens and exclude them from its economic life.

As Netkin has stressed to me over the years, American jurisdictions that accept matriculas are hopelessly naïve, because they usually have no way of distinguishing between consulate-issued matriculas and counterfeit ones. Of course, American driver's licenses can also be counterfeited, but police can promptly detect those by checking the relevant state’s data base, available nationally. In contrast, even if there’s a data base for the matriculas, as Mexico now claims, American agencies can’t access it.

According to my crew of expert consultants (Netkin, Susan Tully (see below), and Immigration Tea Party founder Rick Oltman) all the pernicious aspects of matriculas detailed a decade ago by Wall and by Dinerstein still persist.

And the overarching, fundamental point remains: If someone proffers a matricula when asked for identification, the sensible response is: “I’m dealing with an illegal alien. It’s time to call the feds!”

Back to Wyoming: Susan Tully, a field representative of the Federation for American Immigration Reform [FAIR], tells me that she’d inquired with the city administration and learned that their council had approved the consulate’s use of The Commons, which is a city facility. Tully suggests that such use of a public venue is illegal. (Email Powell Mayor Don Hillman.)

.A separate question: whether the city council has doubled down on their fecklessness by also mandating that Mexican matriculas are acceptable as official IDs there. I haven’t been able to find out. [Ask them].

Jorge noted that Hispanics are quite visible in his part of the state, so maybe that’s the reason. The “Hispanic or Latino” fraction of Powell’s population is 9.4%, while their statewide presence is 8.9%. For comparison, the Hispanic component of Montana’s population is 2.9% out of 989,415.

It’s not quite Reconquista—yet. But, for example, it’s roughly similar to the Hispanic proportion of Washington State, where whole rural areas are now effectively Mexican colonies.

So if this weekend’s visiting Mexican consulate does boffo business in little Powell, we can anticipate that soon “they’ll be baaaack,” elsewhere in the state.

VDARE.com readers within driving distance might show up and—quite visibly—observe and document the activities at this public facility in Powell. You could even picket with signs saying such things as “Mexican matricula cards: Making illegals ‘legal.’” Some helpfully-negative public education about matriculas might result.

There’s precedent: In 2007, a contingent of Minutemen monitored similar festivities at a mobile Mexican consulate issuing matriculas on public property in southern California. Their peaceful presence provoked a heated response from the illegally-officious Mexican “diplomat” involved, attracting, in turn, some useful attention from local police.

I’ll conclude with another tidbit of practical wisdom about illegals’ use of matriculas from Netkin’s Los Angeles-focused Q&A page:

Q. What if I am a fugitive and get stopped for going through a red light in a car that I just stole. Will I go to jail?

A. No. When you present your Mexican ID to the LAPD officer, he will have no way of knowing that you are a serial killer or that you just stole the car you were stopped in. The worst that will happen is that the car you just stole will be impounded and the officer will tell you that you will have to walk home.

But you won't have to walk home if you steal another car.

Paul Nachman [email him] is a retired physicist and immigration sanity activist in Bozeman, MT.