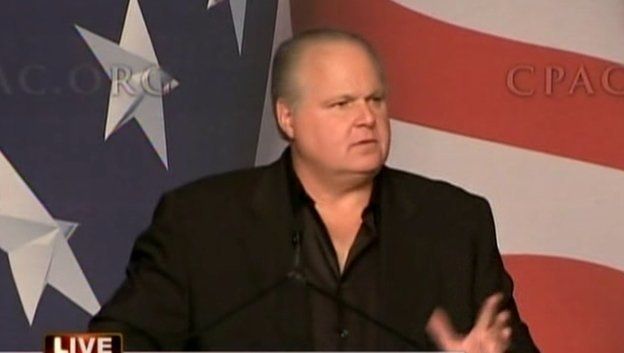 If you ever read the "Intelligence Reports" published by the Southern Poverty Law Center (which is so rich that we've decided to call it the $PLC) or the writings of Max Blumenthal, you notice that they frequently manage to quote conservatives saying "objectionable" things, and link to some other "anti-racist site", rather than the original, as a source. (Here at VDARE.com, you always get the original source. It's what we do.)

"This is ironic considering the crude racism of CPAC's keynote speaker, Rush Limbaugh, who once claimed 'the NFL all too often looks like a game between the Bloods and Crips.'

Blumenthal was linking to a post by black journalist Casey Gane-McCalla, who was not linking to anything, but just asserting that Limbaugh said it, along with a number of other things which Limbaugh may not have said at all. [Top 10 Racist Limbaugh Quotes, October 20, 2008]

In Blumenthal's version, it looks like Rush Limbaugh was complaining, in effect, that there are too many African-Americans in the NFL.

That would be an unusual statement if Limbaugh made it, and it's pretty strong even for American Renaissance, where a contributor lamented the 1956 integration of Southern college football, but where an article on racial differences in sports was titled "May The Best Man Win". Even for "extremists", the position Blumenthal is attributing to Rush would be considered poor sportsmanship. See How Jackie Robinson Desegregated America, by Steve Sailer.

"There is a cultural problem in the NFL that has resulted in a total lack of class on the part of professional players. I love the game of football, but after every sack players are acting like they've won the Super Bowl; they're prancing around with these idiotic dances."

"Look, let me put it to you this way: the NFL all too often looks like a game between the Bloods and the Crips without any weapons. There, I said it."

I was able to source this quote on NFL.fanhouse.com, [Limbaugh: Classless Players Look Like Bloods and Crips, January 20, 2007, by Michael David Smith]. And if you're a Rush 24/7 member, I believe you can find it here.

But Blumenthal has never even read that, as far as I know. He's linking to Gane-McCalla's post, and not even quoting it accurately, since he left out the word "the" in the " the Bloods and the Crips." (He needs to use the copy-and-paste function)

This is what Kathy Shaidle, who's been victimized by it herself, has called "Ransom Note Racism." She was linking to a Robert Stacy McCain article which said

"Beyond Potok's frothy prose, what is worth examining here is the application of what a friend of mine who's been smeared by the SPLC (we are legion) has called their 'ransom note method' of quotation: A phrase here, half a sentence there — the words are cut and pasted together like a kidnapper assembling a ransom note from cut-up magazines, with the SPLC's own interpretative comments helpfully interlarded to tell their readers exactly what to think about the target."

That does sound very familiar. And while we frequently try to explain this to the either dim or mendacious liberals who post these things, it's like pushing the Augean Stables uphill. (Metaphor deliberately mixed.)

Examples of my replies to these darn things include:

The New Republic's attack on Ron Paul was nothing but this "ransom note" technique. [Angry White Man | The bigoted past of Ron Paul, By James Kirchick, The New Republic, January 08, 2008] At least the kid who did that provided PDFS of the old letters so you could get the context.

When Max Blumenthal wrote about VDARE.com's role in fighting back against the War on Christmas in the Daily Beast, we had to devote a whole column to answering all his errors.

The great Dr. John Tanton has also been attacked this way, by the $PLC in 2002 and he replied at length in the Social Contract Press.

The problem here is that the ransom note operations like the $PLC and Fairness And Accuracy In Reporting have access to major MainStream Media outlets. The $PLC has an alumnus on the New York Times editorial board, and Fairness And Accuracy In Reporting had no problem getting the Los Angeles Times to publish one of their ransom notes in an attempt to keep Limbaugh off Network TV. [Limbaugh A Color Man Who Has a Problem With Color? By Jeff Cohen and Steve Rendall, June 7, 2000]

Compare the MSM's circulation with the circulations of the tiny journals of opinion that they're attacking. (Limbaugh, with his 20 million listeners, can take care of himself.) The Internet is the great equalizer here, but it only works if people look at it.

I've been referring to these things as ransom notes because of the cut-and-paste style but for the $PLC, they really are ransom notes—it uses this kind of thing to raise money.

I admit, by the way, that the above is not an exact quote.

As I was saying, we spend a lot of time replying to these things, but it's a great temptation to ignore them, just as people who received anonymous letters used to be advised to just throw them in the fire without reading them.

However, they still go on. The most memorable version of this kind of attack came from David Frum in 2003, when he wrote an article called Unpatriotic Conservatives,[National Review, March 19, 2003] in which he tried to drive conservatives skeptical about the Iraq War out of the conservative movement.

It had the same ransom note style, and included a plea for political correctness in conservative speech. ("Of all the limits against which the paleoconservatives chafed, the single most irksome was the limit placed by civilized opinion upon overtly racialist speech. ") One of the random quotes he threw in was this one: "'King bedded other men's wives, other wives' men, underaged girls, and young boys,' raged a columnist in the newsletter [Lew] Rockwell ran before he started his website. "

, where that's from. It was written by someone called Sarah Barton in the Rockwell-Rothbard Report, January 1991, p. 2. Who? When? What? Even for an attack on an obscure political movement, that's a little obscure.

And speaking of obscure political movements—David Frum has left National Review, but not, be it noted, the Republican Party, and he has a new website called newmajority.com. Their policy is based on surrendering to Obama's agenda, because fighting will just make people mad. And since Rush Limbaugh is resisting that…he must be a racist. David Frum wrote a post supporting Michael Steele, and attacking Rush Limbaugh, saying

"When Rush goes on to say that the only reason Republicans refrain from openly wishing for disaster is their fear of challenging a black-skinned president, as he again and again does, he is revealing that there is something more going on here than a mere call for more economic individualism. Limbaugh's wishes for Obama's failure are saturated with race consciousness—a race consciousness that Limbaugh (again falsely) attributes to the whole Republican Party. "[Steele: Right The First Time, March 2, 2009]

Well, no. I'm familiar with people who are "saturated with race consciousness." And I don't just mean Jared Taylor. I include Barack Obama, George P. Bush, Janet Murguia… and David Frum.

Limbaugh isn't like that. He's a conservative Republican. What he's saying is that Republicans are cowards. Remember, John McCain decided that he'd rather lose the election than win by attacking Obama on racial issues where he was vulnerable.

And pointing that out is what Frum is attacking him for. An earlier Frum attack on Limbaugh was more in the ransom note style. It referenced, as Ross Douthat pointed out, Limbaugh's "weight, history of drug problems, and various other personal foibles while drawing a contrast between a liberalism embodied by Obama and a conservatism embodied by El Rushbo."

It looks like David Frum either favors "the liberalism embodied by Obama" or is at least willing to surrender to it.

Rush Limbaugh used to have a banner that said "America Held Hostage" on his TV show during the Clinton years.