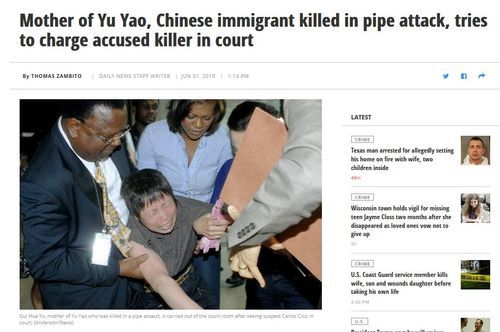 The Fulford File | American Nightmare—In Chinatown Murder Case, The VICTIM Is An Immigrant, The KILLER Is...[Censored]

I did a blog item recently about a DREAM act-eligible illegal named Clemente Garcia Arciga, who, after being celebrated in one newspaper article for being a DREAMer, was reported in another as being charged with rape. My blog is out there in cyberspace, it was based another item by Mediatrackers.org: Newspaper’s Illegal Immigration “Cinderella Story” Arrested on Charges of Child Rape, Incest, By: Timothy Adams, , September 5, 2013, but if you search Google News at this moment for Clemente Garcia Arciga you get…NOTHING.

But imagine the Main Stream Media-wide alert if Clemente Garcia Arciga were a victim.

In Forget It, Juan, It's Not The Old Chinatown—Chinese Immigrants Organizing For Self-Defense Against Hispanic Criminals, one of Steve Sailer's readers wrote, under conditions of extreme anonymity, that

I live in Flushing, Queens, one of the largest Chinatowns in America. A couple years ago, a Chinese student studying here was raped and beaten to death by a Hispanic immigrant. It was very sad, not only because of the murder, but because it was very Kitty Genovese, and people saw the attack and heard her scream and didn't call the police.

Steve provided a link to a story about the killing. It read:

Gui Hua Yu, mother of Yu Yao who was killed in a pipe assault, is carried out of the court room after seeing suspect Carlos Cruz in court.

The mother of a Chinese immigrant slain in a brutal pipe attack two weeks ago had to be restrained when she tried to attack her daughter's accused killer during a court appearance Tuesday.

"I want to kill that man!," Guihua Yu wailed repeatedly in her native Mandarin. "I want my daughter back!"

Guihua, 55, tried to pull away by grabbing at a courthouse bench as state court officers moved in. [More]

The video clip below about Carlos Cruz’ sentencing doesn't say anything about his immigration status until the very end, when ABC7 News reveals that he is an "illegal Mexican immigrant"—but his statement to the court is given in Spanish through an interpreter.

Yu Yao was a LEGAL immigrant, studying at college. Here she is in a screenshot from CBS2 as an immigrant, posing in front of the Statue of Liberty: 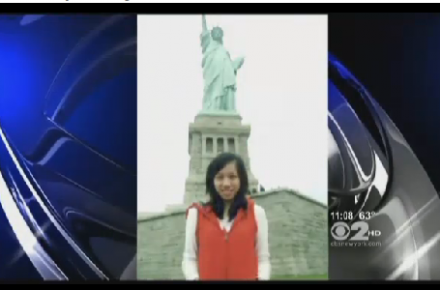 At the sentencing, the New York Daily News did mention Cruz's citizenship, but in a way that's incredible in context (emphasis added):

Cruz, another immigrant pursuing the American Dream, blamed his troubles on the alcohol and crack cocaine that buoyed him during his forced separation from his wife and child in Mexico.

Well, I am here to deny that the American Dream includes raping a woman in an alley, and beating her to death with a pipe. Maybe it's included in the Mexican Dream.

Have you noticed how immigrants and/or Hispanics have become inseparable in the media mind from the cant phrase "the American dream," even when the implications are disastrous...?

His two examples were these headlines:

Both newspapers have since changed the headlines. The New York Times honestly admits:

A version of this article appeared in print on April 28, 2013, on page A1 of the New York edition with the headline: Before Bombs, a Battered American Dream.

The Washington Post doesn't admit any change, but the URL you're clicking on to get to that story is still this: http://www.washingtonpost.com/national/cleveland-suspect-ariel-castros-american-dream-darkened-by-allegations-of-violence/2013/05/11/61302bd8-ba44-11e2-92f3-f291801936b8_story.html [Emphasis added]

The pattern (is there a stylebook rule?): if any immigrant can be seen as a victim of American crime, the story will be promoted in the Main Stream Media to gain sympathy.

But if any immigrant victimizes someone in America—including another immigrant—the immigrant perp’s status will be (a) unmentioned, or (b) we’ll be explicitly told that no conclusions should be drawn and nothing done.

That’s why it’s vital to defeat Amnesty—it will bring in more victimizers than valedictorians, and, thanks to the MSM blackout, it will take everyone but us here at VDARE.com by surprise.

That will be a true American nightmare.