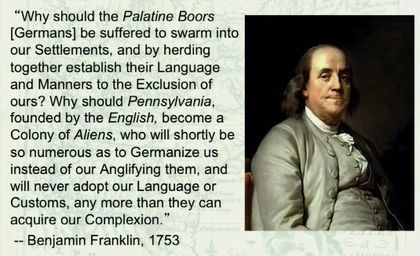 While there are many things Franklin is remembered for, (author , inventor, Founding Father) he's remembered here at Vdare.com as an early immigration skeptic.

The issue in the mid-eighteenth century was German immigration, (and the German language.) Germans made up 33 percent of the population of Pennsylvania at one point. Oh, and they were competing with Franklin in the printing trade.

Here's what Peter Brimelow wrote in 1992:

For example, it is conventional to dismiss all concerns about immigration with the argument that such fears have proved groundless in the past. Of course, this is illogical. Just because a danger has been averted in the past does not mean it cannot happen in the future. Many passengers might have climbed aboard the lifeboat safely; one more may still capsize it. But in fact these concerns, which have been expressed by the most eminent Americans going right back to colonial times, were perfectly reasonable. They were rendered moot only by changing circumstances. Thus Benjamin Franklin worried about German immigration in 1751:

"Why should Pennsylvania, founded by the English, become a Colony of Aliens, who will shortly be so numerous as to Germanize us instead of our Anglifying them... ?"

Franklin was not proved wrong: instead, German immigration was halted—in the short run, by the Seven Years' War (1756-63); in the longer run, by the post-Revolution Great Lull.