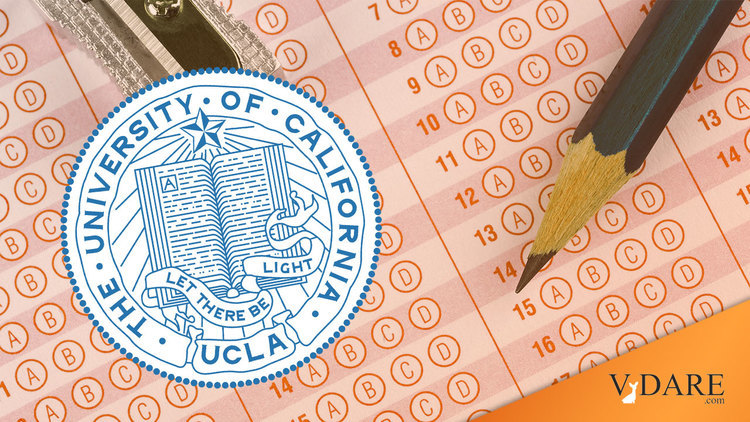 University of California President Richard C. Atkinson is caught between a rock and a hard place. In order to remain politically correct—a requisite for keeping his job—he had to engage in hate speech and hate thought, offenses that mandate sensitivity training if not prosecution.

California's Proposition 209 forbids privileged university admissions on the basis of skin color. Mr. Atkinson believes that blacks and Hispanics will be "under-represented" at Berkeley and UCLA unless they can be admitted on a different basis than Asians (over-represented) and whites (under-represented).

Atkinson's position is a politically correct one, but it is demeaning to minorities. Atkinson said that blacks and Hispanics, unlike Asians and whites, cannot pass the SAT, a tried and true measure of aptitude for, and success in, higher education.

Mr. Atkinson, therefore, proposes to abolish the SAT in order to lower admission standards to the point where blacks and Hispanics can claim their group share of admissions.

Mr. Atkinson's attack on merit and achievement scores high marks for political correctness, but why aren't blacks and Hispanics demanding Atkinson's head for his racist remarks?

Several years ago a scholarly book was published, The Bell Curve, which suggested that some races have a higher percentage of higher IQs than others. Liberals went berserk. Even if it were true, it was taboo to say it.

Now the president of the University of California is saying it. Atkinson escapes condemnation, because his statements are seen as an excuse for minority privilege.

People who marched in civil rights demonstrations in the 1950s and 1960s did not expect the outcome to be the abolition of the SAT and the emergence of a racial spoils system. They thought they were striking a blow for equality in law so that merit would not be restrained by race.

How far we have fallen since those days! Today the president of the University of California is fighting to replace academic standards with racial balance. Individual merit has become racist because it does not produce proportional representation of the races in higher education. What a paradox it is that the outcome of the civil rights movement is to replace equality in law with racial preferment.

Conservative proponents of "open borders" immigration should take note that in California the result of immigration is the diminution of academic standards.

Another result of immigration is a vast increase in the percentage of the population whose "preferred minority" status gives them privileged standing in employment, promotion, access to job training programs, university admissions, government contracting, discrimination lawsuits and hate crime legislation. Being "people of color," immigrants (legal and illegal) are legally privileged compared to native-born white heterosexual able-bodied males.

Yet another result is the breakdown of assimilation, not only because of the numbers but also because privileged legal standing based on race (and gender) is slowly creating a caste society, not an assimilated one. Civil rights activists dismiss assimilation as illegal discrimination against races and creeds that are not part of the "hegemonic European culture." Assimilation is derided as anti-diversity and anti-multicultural.

Even the assimilation of whites has broken down. Students are taught to reject white European culture as racist, sexist, homophobic and hegemonic. The demonization of the white male is more extreme than the demonization of Jews by German university intellectuals during the 60 years prior to Adolf Hitler.

In California whites are a racial minority, as they are in the world. But whites are not considered a minority. No one is complaining about their under-representation at Berkeley and UCLA. Whites are considered "hegemonic" even when they are a minority, because the culture and society are white constructs.

With the assimilation of whites blocked by deconstruction in the classroom and immigration creating a majority of "preferred minorities" with privileged legal standing, academic standards will not be the only white construction to bite the dust. America's destiny lies in third world culture.