Needed In Response To The Berkeley Riot: A New "Dear Colleague" Letter, A Federal Civil Rights Investigation—And Some Arrests

Steve Sailer has brought forward the suggestion from a reader that the Department of Education should send a Dear Colleague letter to the Chancellor of the University of California, Berkeley (UCB) in response to the suppression of the First Amendment at UCB.  This is just the sort of action President Trump and Education Secretary-Designate Betsy DeVos should take.  It would follow the precedent set by Barack Obama and his Department of Education (DOE) set regarding forcing schools of all types to respond to specious claims of sexual harassment outside of normal channels for investigation and punishment of charges related to sexual assault and sexual harassment.  The universities quickly complied without any challenges, establishing a legal precedent.

Similarly, aggressive action by the DOE to protect the First Amendment is not without precedent. The DOE Office of Civil Rights (OCR) has the authority to investigate any violation of the rights of students.  And it has in the past. Campuses of the University of California have been under continuous investigation in recent years for harassment of Jewish students by violent thugs protected by the various university administrators from punishment.  The perpetrators are routinely Muslims, and not Nazis or Klansmen. 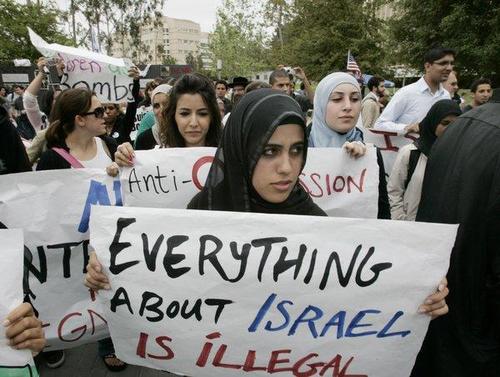 OCR investigations are expensive for universities to defend, and even if the fix is in, as was in the OCR the recent OCR investigations at UCB and the University of California, Los Angeles (UCLA), as it is always the opinion of civil rights activists that people of color and Muslims can't violate anyone's civil rights.  However, there is a new President in town and soon a new Education Secretary, who will appoint a new head of the OCR.  This would be very bad news for UCB and the recent patterns of attacks on white students and discrimination against white students.

While it might be hard to shoehorn the Milo incident at UCB into a OCR case as Milo is not a student, another case does, where predominately Asian students at UCB blockaded white students from entering the campus.

Students at the University of California, Berkeley held a day of protest on Friday to demand the creation of additional “safe spaces” for transgender and non-white students, during which a human chain was formed on a main campus artery to prevent white students from getting to class.

The demonstrators were caught on video blocking Berkeley’s Sather Gate, holding large banners advocating the creation of physical spaces segregated by race and gender identity, including one that read “Fight 4 Spaces of Color.”

Protesters can be heard shouting “Go around!” to white students who attempt to go through the blockade, while students of color are greeted with calls of “Let him through!”

Students turned away by the mob are later shown filing through trees and ducking under branches in order to cross Strawberry Creek, which runs underneath the bridge.

Berkeley Protesters Form Human Chain To Stop White Students From Getting To Class, by Bradford Richardson, The Washington Times, October 24, 2016

That did not happen to the Asian students and their criminal acts violating the civil rights of white students.  The OCR, in addition to the Civil Rights Division (CRD) of the Justice Department are soon to be under new management.  So the Trump Administration has considerable power to subdue the criminal regime in charge at UCB, led by Chancellor Nicholas Dirks, who denounced Milo before his appearance and appears to have ordered the UCB Police Department and the Berkeley Police Department to back off suppressing the riot and violence that led to the cancellation of Milo's speech.

Both the City of Berkeley and the UCB Police Department, as well as the City itself and UCB are vulnerable to a civil rights investigation for violating Milo's rights as well as those of the other victims of the violence, who were uniformly white.  Failure to take action by police officers and State and local governments is prohibited by Title 18 United States Code Section 242, Violation Of Rights Under Color Of Authority.

Whoever, under color of any law, statute, ordinance, regulation, or custom, willfully subjects any person in any State, Territory, Commonwealth, Possession, or District to the deprivation of any rights, privileges, or immunities secured or protected by the Constitution or laws of the United States, or to different punishments, pains, or penalties, on account of such person being an alien, or by reason of his color, or race, than are prescribed for the punishment of citizens, shall be fined under this title or imprisoned not more than one year, or both.

UCB and other campuses of the University of California (UC) system are engaged in systematic violation of rights of white and Jewish students and the Trump Administration has the power to make the State of California and the UC system pay dearly.

If U.C. Berkeley does not allow free speech and practices violence on innocent people with a different point of view - NO FEDERAL FUNDS?

I am certain that this needs to wait for the confirmation of Betsy DeVos and the subsequent confirmation of Jefferson Beauregard Sessions III, but after next week, action must be taken. Probably the first major decision will be selecting a new United States Attorney (USA) for the Northern District of California.  The new US Attorney must be aggressive and committed to equal rights for White Americans willing to push the Assistant United States Attorneys under him to prosecute to the fullest extent the numerous violations of rights by thugs and the UC administrators who protect those thugs who violate the rights of white Americans.

In the meantime, though, President Trump should order HSI to begin their investigation of UC administrators and bureaucrats including University of California head  Janet Napolitano, UCB Chancellor Nicholas Dirks, and Undocumented Student Program Academic Counselors Meng So  and Liliana Iglesias.  HSI should also be directed to begin targeting the illegal alien students attending the UC system for arrest and deportation.

This would be a good start and put UC and California on notice that an Operation Wetback is coming soon.