Before the election, the great Leftist fear was that Donald Trump would refuse to acknowledge his inevitable defeat, thus ensuring chaos. Just before the President-Elect is to be inaugurated, the new Leftist fear is that Democrats will recognize Donald J. Trump is in fact Commander-in-Chief, thus preventing chaos. What is taking place here is something beyond political disagreement. It’s the beginning of the breakdown of American order itself.

Before Trump has so much as put his hand on the Bible, elected officials from the Democratic Party are already boycotting his inauguration, urging on radical street “protests” i.e. turbas, and gleefully aligning themselves with the most extreme elements of the Left. Among them: the so-called “antifa,” self-styled anti-fascist activists known for using force, violence and intimidation to prevent peaceful gatherings and the free exchange of ideas. These groups are openly promising to cause chaos at the inauguration, as the Main Stream Media cheers.

One member of the “D.C. counter-inaugural welcoming committee” commented anonymously that housing space for 1,000 hundred visiting radicals, in both church halls and houses, had been organized by their group alone. New York anarchists are raising funds to rent whole buses to attend. And, as historic anti-fascist mass protest dictates, there are plans for a large black bloc—a spectacle both intentionally threatening and anonymizing. The expectation of altercation with Trump supporters who will also descend on DC is high. 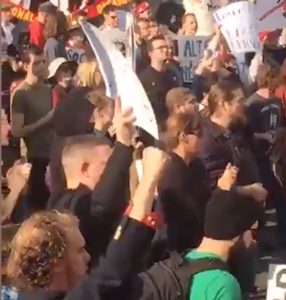 Of course, this is precisely how David Hines (@hradzka on Twitter) predicted that political violence would begin in his brilliant Storify on the Cold Civil War. As he notes, Leftists are supremely better organized, have more financial resources, are more willing to use violence, and, most importantly, enjoy air cover, with the MSM obscuring or defending whatever they do. An example: at the recent National Policy Institute conference, “Hailgate” dominated the headlines and real story—of open, organized, officially-tolerated Leftist violence—was completely ignored.

However, Hines also predicted the Right would start fighting back against such efforts—because the Left was being too free with the label of “fascist.” After all, if Donald Trump is a “fascist,” and all Republicans who support him are “fascist,” the sting of being called a “fascist” is going to wear off mighty quick.

It's already happening. Mainstream conservative news outlets are now condemning “terrorist” protesters and urging that they spend the entire Trump Administration “behind bars. "[The Definitive Field Guide to Black Bloc Terrorists Who Want To Shut Down Trump Inauguration, by Lee Stranahan, Breitbart, January 17, 2017] And with “Bikers for Trump” rolling into town (hailed by the POTUS himself), we might also be seeing the beginning of the right wing self-defense squads Hines predicted.

And for the first time, under future Attorney General Jeff Sessions, we might even see a crackdown on the Leftist terrorist groups which have been subtly encouraged by the Obama Administration.

Protesters are already implicitly admitting their lenient treatment by urging each other to “go hard”—because this is the last time they get to enjoy the outgoing president’s hands-off approach to riots and disorder [Protesters to ‘go hard’ during Trump inaugural, WND, January 18, 2017].

The heroic James O’Keefe has even exposed a plot by the “D.C. Anti-Fascist Coalition” to disrupt the DeploraBall, a gathering of Donald Trump supporters, with butyric acid [Video shows anti-Trump activists plotting to set off stink bombs, sprinklers at inaugural fetes, by Valerie Richardson, Washington Times, January 16, 2017].

This battle will come down to policy. As Dave Weigel notes in a typically insightful piece, the Democratic strategy of questioning Trump’s legitimacy aims at intimidating Trump into not following through on his populist policies:

[A]t home in New York, and at work in Washington, Trump will be in close proximity to hundreds of thousands of active Democrats. De Blasio, whose constituents will soon include the family of the 45th president, will address a rally at New York’s Trump hotel on Thursday night. Resistance, he said, started with Democratic confidence that their progressive politics had won the popular vote, and confidence that Republicans would not act on the pro-infrastructure, anti-elite economic policies Trump had used to win the election. Republicans had won on theory, and Democrats would confront them with reality.

[Democrats prepare for Trump with one of the earliest resistance movements ever to greet a new president, Washington Post, January 19, 2017]

And, needless to say, the biggest obstacle to Trump not following through: members of his own party, especially Speaker Paul Ryan. In recent days, Ryan has started moving closer to Trump, even (in what would have been unimaginable only days ago) praising what he called “responsible nationalism” [“Responsible Nationalism”: Paul Ryan Warming To Donald Trump’s Ideology With ‘Border Adjustment Tax,’ by Matthew Boyle, Breitbart, January 19, 2017]. But Trump will still need to overcome sizable opposition within his own party for his trade, foreign, and immigration policies.

However, the Left may have given Trump a way out.

One of the most widely promoted Leftist responses to Trump: the development of “Rapid Response Networks” designed to oppose “ICE raids” [Rapid Response Network: Assembly, The Base, September 10, 2016]. But deporting illegal aliens who break the law (in addition to their coming here in the first place) is a popular policy. President Trump and Attorney General Sessions should challenge the Left directly by sending ICE agents into liberal communities to deport illegals who have been convicted of serious crimes. Democratic politicians would then be forced into the indefensible position of explaining to Americans why people who shouldn’t be in the country in the first place should be allowed both to stay and to prey on citizens.

More broadly, Donald Trump’s strategy of confrontation, as shown in the primaries, works. Trump went up in the polls the more militant protesters tried to resist him in California, New Mexico, and Chicago, Illinois.

Half of politics is about forcing your opponents to defend indefensible positions. By forcing Democrats who are so determined to “resist” to defend not deporting criminals, Trump can once again put himself on the side of a winning confrontation.

And Trump’s Right, unlike the Right of George W. Bush, is a fighting Right. Republicans during the Bush years were also protested and besieged—but they consistently knuckled under. In contrast, Trump always punches back, even against someone the MSM designates a sacred cow like “Civil rights Icon” Congressman John Lewis.

And Trump’s supporters have followed his example, showing their willingness to strike back against reporters, politicians, and even cuckservative Republicans who oppose Trump.

If Trump remains true to what he promised in the election, what will unfold next will be reminiscent of what Pat Buchanan famously said of the LA riots in his great 1992 convention speech: 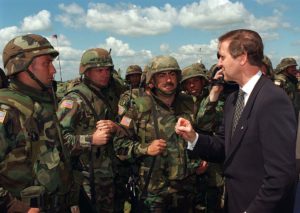 Hours after the violence ended I visited the Army compound in south LA, where an officer of the 18th Cavalry, that had come to rescue the city, introduced me to two of his troopers. They could not have been 20 years old. He told them to recount their story.

They had come into LA late on the second day, and they walked up a dark street, where the mob had looted and burned every building but one, a convalescent home for the aged. The mob was heading in, to ransack and loot the apartments of the terrified old men and women.

The mob threatened and cursed, but the mob retreated. Because it had met the one thing that could stop it. Force, rooted in justice, and backed by moral courage…