Tactical Triumph For Trump On Government Shutdown. Real Showdown Ahead. Has GOP Learned?

Schumer's achievement: —Got a debate on a Dreamer bill McConnell said he'd have anyway —Exposed lack of popular support for Dems' Dreamer obsession —Caved on the Wall, which is now part of baseline for new negotiations

President Donald Trump starts 2018 with a political win, as Chuck Schumer’s gambit to shut down the government to defend illegal aliens has collapsed [Schumer: We’re reopening government with commitment to vote on DACA if deal isn’t reached by February 8th, by Ian Hanchett, Breitbart, January 22, 2018]. The Democrats did win a supposed “commitment” for an up and down vote on DACA in early February, but it is unclear what that actually means in practice. Besides, the Democrats can’t do much if the GOP doesn’t give them the kind of vote they want: the threat of a government shutdown has now been exposed as hollow. 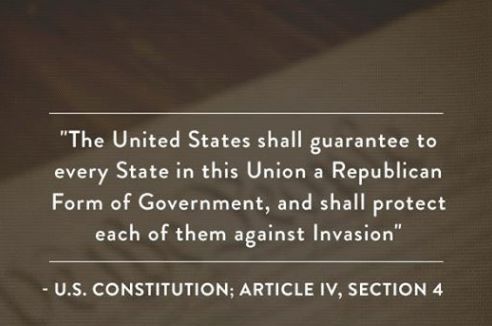 The optics of the showdown were terrible for the Democrats. Securing the border is one of the few things the federal government is actually supposed to do. It’s was therefore immensely clarifying that the Democrat Party shut down the government to ensure that illegal immigrants are allowed to remain in the U.S. in defiance of American laws.

Indeed, the Democrats chose this hill to die on even as new reports reveal there are millions more so-called “DREAMers” squatting in our country than was commonly believed. [There are 3.6 M ‘DREAMers’ – a number far greater than commonly known, by Alan Gomez, USA Today, January 18, 2018]

Far from cucking, President Trump and the Republicans actually went on the offensive against the Democrats on the immigration issue, accusing them (accurately) of being “complicit” in crimes committed by illegals.

Of course, the Main Stream Media did its best to blame the government shutdown on the Republicans, claiming that the GOP was responsible because it controls every branch of government. But as there needs to be 60 votes in the Senate to pass a funding bill, it was Democrats, not Republicans, who controlled the process. [Government shutdown: Where the senators stand, by Ashley Killough, CNN, January 19, 2018]

The only way the Republicans could have unilaterally ended the shutdown was if they triggered the “nuclear option” and allowed the government to be refunded via a simple majority vote.

Great to see how hard Republicans are fighting for our Military and Safety at the Border. The Dems just want illegal immigrants to pour into our nation unchecked. If stalemate continues, Republicans should go to 51% (Nuclear Option) and vote on real, long term budget, no C.R.’s!

Perhaps to hold on what little leverage he still had, Schumer caved on Monday, thus implicitly revealing the shutdown was the Democrats’ responsibility the entire time.

Indeed, now that the shutdown is over, the Democrats seem to be plagued by Narrative Confusion. Democrat Senators in red states are claiming the showdown wasn’t even about DACA.

Dem MT Sen Tester: I didn’t vote for this because it’s a bad deal for Montana. It was never about DACA. It’s about making sure a budget goes on for a fiscal year making sure we have money for rural hospitals.

But Senator Dick Durbin, whose hatred of the Historic American Nation may be second only to Schumer’s, openly admits the shutdown was about DACA.

Durbin thanks Dem senators for shutting down government over DACA: 'You stuck your necks out and said I'm going to go on record even if it's hard to explain back home.'

What the entire sad spectacle reveals more than anything else: the fanatical commitment of the Democrat Party to replacement immigration. Indeed, even the claim that the government shutdown was needed to “protect DREAMers” doesn’t make any sense, as DACA protections do not expire until March 5, and may even extend beyond that. [The Trump administration is keeping DACA on life support, by Dara Lind, Vox, January 18, 2018]

Like drug dealers high on their own supply, the Democrats were driven into a politically disastrous showdown because of the fanaticism of their base. And their nonwhite clients are already calling the decision to reopen the government a sellout—meaning more blind confrontations ahead. [The Senate sells out Dreamers in deal to end government shutdown, TheGrio, January 22, 2018]

The absurdity of an American political party taking a stance on behalf of the “right” of millions of foreigners to occupy our territory makes the investigation into “Russian collusion” increasingly ludicrous. But even there, Trump is scoring tactical triumphs.

Republicans are outraged at the news key text messages between FBI agent Peter Strzok and Department of Justice attorney Lisa Page were deleted, sharpening suspicions that the entire investigation of Trump was politically motivated. [Lost FBI texts could form basis for motion to dismiss in Trump team fight against Russia probe, by Rachel Stockman and Ronn Blitzer, Law and Crime, January 22, 2018]

Republican strength shouldn’t be overemphasized. There is still a great deal of time before the midterm elections and Republicans should still be worried. The defeat of Roy Moore in Alabama, a recent Democrat victory in a conservative region of Wisconsin,  the retirement of many Republican incumbents and the general historical trend of the president’s party losing seats in Congress two years into his term all mean the GOP is fighting an uphill battle. [Democrats flip Wisconsin district that Trump won by 17 points, Associated Press, January 17, 2018]

Still, there are some sighs the “blue tide” may recede and that this moment represents a turning point in President Trump’s political fortunes. The Democrats’ advantage in the generic party ballot had declined from double digits to only five points even before this Republican victory [Poll: Democratic lead narrows on 2018 generic ballot, by Julia Manchester, The Hill, January 21, 2018]. It’s increasingly difficult for the Democrats and the media to pretend the booming economy has nothing to do with President Trump’s policies [Poll: Booming economy lifts Trump, Hispanics, women optimistic, by Paul Bedard, Washington Examiner, January 16, 2018]. The Trump tax cut still doesn’t win majority support, but support is increasing [Poll: Support for Trump tax law increasing, by Naomi Jagoda, The Hill, January 17, 2018].

Even anti-Trump corporate leaders like Apple CEO Tim Cook are giving the president some praise and making enthusiastic announcements bringing jobs to the United States [Apple CEO: Trump Tax Plan ‘Will Result In Job Creation And A Faster Growing Economy, by Lucas Nolan, Breitbart, January 18, 2018]. And with President Trump turning to infrastructure and the Republicans staying united on immigration, the GOP is shifting in a populist direction just in time for campaign season [Leaked document shows White House plan for major rural infrastructure program, by Gabby Morrongiello, Washington Examiner, January 22, 2018].

A great deal of political commentary consists of variations on the theme of “this person’s best political strategy would be to act in accordance with my own ideological preferences.” Yet since President Donald Trump descended that escalator at Trump Tower to overturn the entire American political establishment, it’s impossible for immigration patriots not to believe they have the key to political victory. If you want to win an election as a Republican in  2018, you shouldn’t listen to political consultants, you should read VDARE.com.

It’s too early to for immigration patriots to rejoice, and the GOP is still in great political danger. But with this tactical victory in the shutdown, it appears Republicans are at least beginning to learn immigration patriotism is a political winner as well as sound policy.

Hopefully, the Stupid Party can stay strong, and not seize defeat from the jaws of victory next month by caving on immigration.