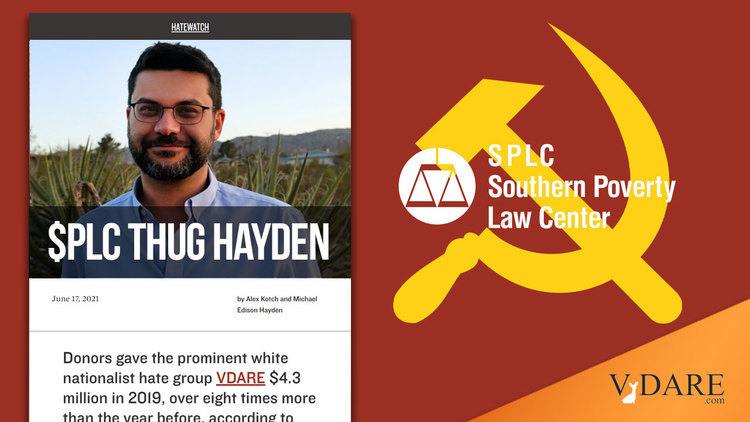 Donate To VDARE.com—help us catch up to the $PLC!

Southern Poverty Law Center thug Michael Edison Hayden still has us blocked on Twitter, perhaps because the FBI really did question his followers who openly plotted to burn down our Berkeley Springs Castle after his last attack on us. And we are happy to say his latest attack (Donors Pumped Millions into White Nationalist Group, with Alex Kotch, SPLC.org, June 17, 2021—note that we’re not afraid to link to critics, unlike the SPLC, which can’t afford to let its readers judge for themselves) shows real fear of VDARE.com’s “prowess.” And that’s thanks to you, our wonderful donors.

Note also that, while it’s some time since we posted a full breakdown of the SPLC’s finances, as of 2020 these include $614 million in assets, and $108 million in annual revenue [SPLC Form 990, PDF].

As the Washington Free Beacon reported in 2018, and we reported much earlier, a lot of this money is in offshore funds.

Our comments on a few key quotes from Hayden's hit piece:

Of course, VDARE.com is not “white nationalist,” although we do think whites have rights. (“Hate group” just means we’re American patriots). But naturally we’re delighted that the $PLC acknowledges we’re “prominent”!

From your lips to God’s ears, Michael! We did have a good year in 2019 (thanks, readers!) But we think the “big-money donors of the conservative movement” are too chicken to give to the patriotic immigration cause. Still, donate now and fuel the $PLC’s paranoia!

Purr! This is my kind of hit piece. Please, go on!

I no longer see any point in quibbling about nuance: America’s Totalitarian Left is communist.

Our purchase of the Berkeley Springs Castle, because communist threats have made it impossible for us and other patriots to hold meetings, really scares the $PLC. Good—keep scaring them!

My salary should have doubled, of course, but alas it did not. VDARE.com people did all get their first raise for a while that year, but my payment reflected reimbursement for my subsidizing our operations during hard times.

Most of the rest of the $PLC continues the mounting Leftist attack on Donor Advised Funds, a legal mechanism that allows Americans to simplify their charitable giving and also to donate anonymously. (Some Woke Donor Advised Funds are beginning to prevent donors from giving their own money to Politically Incorrect causes—I urge anyone thinking of using one to read Lydia’s Patriots Beware! Corporate Cultural Marxists Invade Donor Advised Funds).

Of course, the Left hates anonymity because it wants to be able to set its social media mobs on patriot donors.

This was greeted with great hilarity in the VDARE.com office, where my resistance to thinking about finances—in this case, what we do with cryptocurrency donations from patriots—is notorious. Needless to say, all kinds of people invest in Bitcoin, so this smear was a stretch even by $PLC standards.

But crypto-currencies are obviously on the Totalitarian Left’s hit list.