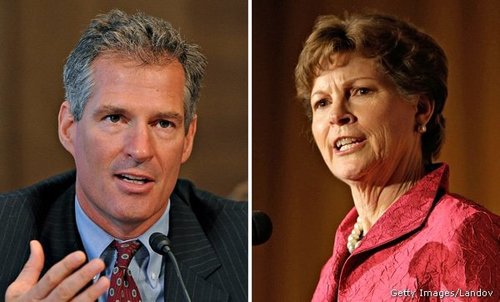 Scott Brown says that his Senate run in New Hampshire “is about immigration”—and unfortunately for him, Open Borders plutocrats like Mark Zuckerberg are listening. Zuckerberg’s lobbying group is running ads for his opponent Senator Jeanne Shaheen, even as another wing of Zuckerberg’s fundraising octopus shifts money to pro-amnesty Republicans like Marco Rubio and Paul Ryan. Despite it all, Brown has taken the lead in a state that many Republicans had written off. If he wins, he could pave the way to for a successful new strategy for the Republican Party nationally.

For the first time, Scott Brown is actually leading in a poll taken in New Hampshire, albeit by less than two points, within the margin of error [Scott Brown Jumps Ahead In Polls For The First Time, by Matthew Boyle, Breitbart, October 14, 2014]. This comes at a time when Brown is specifically linking the immigration issue to the spread of Ebola. Brown has charged that “we have a border that is so porous anyone can walk across it.”

Greg Sargent at the Washington Post sneers that this is a “double jolt of fear” that Brown and other Republicans are using to seize political advantage in the midterm elections, which have proved far closer than the GOP Establishment seems to have expected [Scott Brown: Anyone with Ebola can ‘walk across’ our ‘porous’ border, October 14, 2014]

But what Sargent calls fear, I call responding to the deeply-held concerns of voters.

The same poll that showed Brown taking the lead showed that over half the state’s voters were “very” or at least “somewhat” concerned the Ebola virus could affect New Hampshire, with less than 10% “very unconcerned” [October 9, 2014 Poll Results, New England College Polling Center]. Brown’s criticism appears all the more salient with today’s news that a second patient has been infected within the U.S.—and flew across the country the day before she showed symptoms. [Ebola Patient Traveled by Air Day Before Symptoms Surfaced, CBS Dallas Fort-Worth, October 15, 2014]

And it’s not as though the Democrats aren’t using their own brand of fear. Shaheed is running ads charging that Brown would “force women” to look at pictures of “developing fetuses” before they could have an abortion. (Brown is responding with his own ads rebutting the charge and declaring his support for “abortion rights”). [NH Sen. Shaheed Ad: Scott Brown ‘Forces’ Women To View Photos of Unborn Babies Before Abortion, by Dr. Susan Berry, Breitbart, October 13, 2014]

Brown is also under attack from the Huffington Post and other hysterical Leftist outlets after appearing at a tailgate party. The tailgate had fraternity members in attendance, who are automatically despised by reporters and who admittedly didn’t break any stereotypes by screaming some unchivalrous language about Senator Shaheed [Scott Brown Frats It Up. It Goes Exactly As You’d Expect, by Amanda Terkel, Huffington Post, October 13, 2014].

This comes on top of an episode in Scott Brown’s failed re-election bid in Massachusetts (where he consistently failed to use the immigration issue—maybe he’s learned something). Brown responded with a light-hearted comment of “Thank God” when then-opponent Elizabeth Warren said that, unlike Brown, she had never had to pose as a model. [Women’s groups dress down Scott Brown, by MJ Lee, Politico, October 6, 2011] In these hyper-sensitive times, Brown can thus be accused by a diarist at the powerful Democratic blog DailyKos of having a campaign and career characterized by “aggressive misogyny.” [Scott Brown’s frat buddies scream ‘f**k’ Jeanne Shaheed’ and call her a c**t’, by Laura Clawson, DailyKos, October 13, 2014]

The problem with all this is that Brown has repeatedly proclaimed himself a “pro-choice” Republican who even supports federal funding for Planned Parenthood.

Just as the Republican Party has been compared to an immovable gun that can be deadly if you cross its field of fire but harmless if you avoid the predictable path, so is the Democrat “War on Women” tactic of questionable value against a moderate like Brown. Brown is hardly running as a conservative insurgent in New Hampshire. He’s even challenging his own state party on social issues. [Scott Brown splits with New Hampshire GOP on abortion, by Burgess Everett, Politico, September 22, 2014]

Exactly as VDARE.com’s Washington Watcher predicted, Brown actually represents the return of Pete Wilson Republicanism. Wilson, the former Republican governor of California, pushed aggressively to remove the pro-life plank from the Republican platform. [Pete Wilson’s belated efforts to unnail the GOP abortion plank, by Jack Germond & Jules Witcover, Baltimore Sun, August 9, 1996] However, because of Wilson’s support from Proposition 187 and his effort to save California from mass immigration, Wilson is still somehow remembered as a “monster” and a “bogeyman” by the Treason Lobby—if not by California voters. [Wilson’s return may hurt GOP Latino outreach, by Joe Garofoli, San Francisco Gate, March 20, 2010]

Similarly, Brown’s candidacy, in his own words, is about immigration, not abortion. He is largely evading the Religious-Right zealot caricature that Leftists impute to Republicans in order to scare voters.

But this leaves Brown vulnerable on another front: donors understand that immigration is the issue that matters, even if Conservatism Inc. doesn’t.

Thus, FWD.us, Mark Zuckerberg’s pro-Amnesty group, is now running nearly $1 million worth of ads in order to help Shaheed defeat Brown. Interestingly, though Brown is being targeted by Zuckerburg, the ads themselves will not mention immigration. [Zuckerberg Groups Runs Ads For Jeanne Shaheed After Scott Brown Campaigns Against Amnesty, by Tony Lee, Breitbart, October 11, 2014]

Still, Zuckerberg’s motives are clear, because another wing of Zuckerberg’s operation has run ads to support Republicans that are infamous to any immigration patriot, such as Paul Ryan, Marco Rubio, and Renee Ellmers. [Facebook-linked group drops $1M on Shaheed, by Seung Min Kim, Politico, October 10, 2014] Like a reverse image of Ann Coulter, Zuckerberg is a single issue voter—and just as Coulter’s main concern is stopping Amnesty, Zuckerberg is eager to spend his fortune to take out anyone who opposes it.

Brown is being targeted because he is showing a way forward in “moderate” Northeastern states that The Wall Street Journal claims Republicans had already “written off.” [The Scott Brown Surge, by Jason Riley, September 16, 2014] By avoiding social issues and focusing on the National Question, Brown is putting Democrats on the defensive. Democrats are responding with a two pronged approach of doubling down on political correctness on sexual politics and capitalizing on big money donations from the Treason Lobby. Still, at least for now, it looks like Brown’s may be strong enough to overcome them.

As Senator Jeff Sessions is running unopposed, Scott Brown’s race is the most important single election for immigration patriots to follow this cycle. If he loses, which is what would normally be expected, it can be attributed to the challenges of facing an incumbent, the relentless opposition of the feminist-friendly Main Stream Media, or simply being outgunned in money and resources in the liberal Northeast.

However, if Scott Brown wins, the only explanation possible to both supporters and detractors will be immigration.

A Brown victory would show that immigration patriotism is not just a conservative issue, but something that appeals to moderates and even liberals. In that way, it might even prove more important than the defeat of Eric Cantor.

After all, immigration patriotism can only win once it breaks out of the ghetto of a Beltway Right led by people who desperately want Amnesty – as long as they can avoid the blame.