Mexico is a sovereign state, so it gets to decide who can immigrate. Simple, right?Of course, it’s not cursed with an imperial judiciary—unlike America. In other news, Trump tantrums continue. 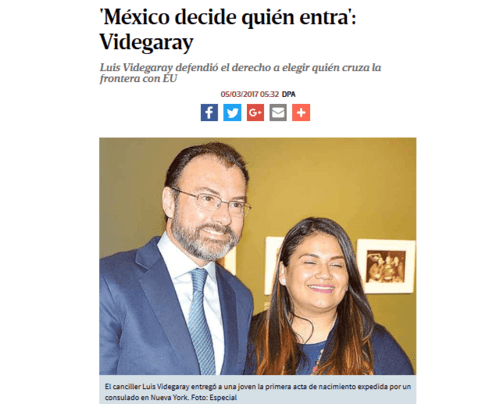 Mexican Foreign Minister Luis Videgaray, on a recent visit to Costa Rica, made it clear that the sovereign state of Mexico has the right to decide who enters its territory:

“It is very clear. The policy of the admission to Mexico of persons of any country—Central Americans or of any other nationality—is defined by Mexico.

“That is the sovereign power of a country, and we are a sovereign country and we exercise our full sovereignty. Who decides who enters Mexico is Mexico and thus we will have to confront the problem.”

Well-said, Mr. Foreign Minister. I agree 100%. In fact, I think we could replace “Mexico” with “the United States” and it would be just as true.

Videgaray really intended his statement to indicate Mexico would refuse to accept Central Americans expelled by the United States. After his recent visit to Washington D.C.,

Luis Videgaray emphasized that in his meeting with officials of the White House, he made clear that “the decisions of who enters Mexico, will be taken by Mexico and only by Mexico”—due to the intention of the American government to deport to our country citizens of other nationalities.

Of course, there’s a simple solution. The United States needs to get control of our border with Mexico and then Mexico can get control of its borders with Central America. 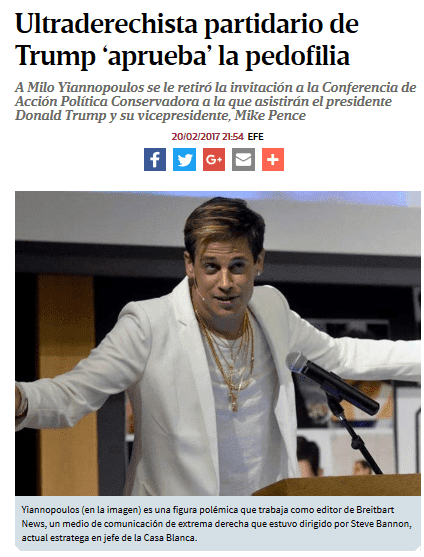 chista partidario de Trump ‘aprueba’ la pedofilia” (“Ultra-Rightwing Supporter of Trump ‘Approves’ of Pedophilia” [February 20, 2017]. It chortled about CPAC dropping Milo and sneered at Breitbart as “a medium of communication of the extreme right.”

Ironically, the whole controversy over Milo’s supposed support for “pedophilia” was based on a conversation about homosexual relationships between 13-year old boys and adults. In Mexico, however, that should cause no legal problems, as the age of consent is twelve.

Unsurprisingly, Excelsior didn’t point that out.

So, Milo’s defense could have been: “Hey, it’s legal in Mexico! Are you anti-Mexican?”

New Ambassador From Mexico: Mexican Immigrants Enrich The Culture Of The United States

Needless to say, Mexico suddenly forgets its concern about “sovereignty” when it comes to America’s immigration policy. Mexico’s new ambassador to the United States, Geronimo Gutierrez, recently declared: “Immigration is really connected with enrichment. No country is a better witness of that than the United States” [Inmigrantes mexicanos enriquecen cultura de EU: Gerónimo Gutiérrez, Excelsior, March 1, 2017].

He enthused: “In their trip north in search of the American Dream, the Mexican immigrants have enriched the culture of the United States with their beliefs, their food, their music and the ancient cosmogony [!], in short, through themselves.

This is the first time I’ve seen “ancient cosmogony” cited to promote immigration. Does it include human sacrifice?

Don’t forget the Mexican Ambassador heads a vast network of 50 consulates to promote his government’s agenda within our country.

La Opinión, the biggest Spanish-language paper in America, reported the two mayors promoted investments and “the implementation of pro-immigrant programs.”

Emanuel also rhapsodized about Chicago being a “sanctuary city”—a policy Mancera said was met with “much pleasure” in his own country. [Alcaldes de CDMX y Chicago promueven puentes y no muros en pro de inmigrantes— “Mayors of Mexico City and Chicago promote bridges and not walls for immigrants,” by Jesús Garcia, February 12, 2017]

And even in Trump’s America, nothing happens.

Mexican Actor In Berlin  Asks Germans How To Stop Trump

Diego Luna is a half-English, half-Mexican movie star born in Mexico City who was a protagonist in Rogue One. Like so many other pampered actors, he fancies himself a great political authority

While in Berlin for a film festival recently, Luna asked the Germans for advice on how to stop the Trump Wall. Like so many others, he seems confused about the purpose of the Berlin Wall (to keep people in) as opposed to the proposed Trump Wall (keep people out):

Mexican actor and director Diego Luna was presented today as a member of the jury at the Berlinale, willing to learn from the Berliners how to knock down walls and sure that no border barrier would put an end to the “stories of love” with the United States.

“I am here to investigate how to knock down walls,” said Luna. “It seems that there are many experts here and I want to take this information to Mexico.”

Politicians Of Left And Right Come Up With Anti-Trump Plans

It seems to be a requirement for Mexican political figures to come up with “anti-Trump” plans. Leftist elder Cuauhtémoc Cardenas recently appeared at UNAM, Mexico’s most famous university, to present his own [Cuauhtémoc Cárdenas presenta un plan nacional contra Trump -“Cuauhtemoc Cardenas presents a national plan against Trump,” Excelsior, February 27, 2017

The Cardenas plan is to face “the discourse, actions and aggressions of the President of the United States” not just by defending Mexicans in the U.S. but by establishing a new economic model for Mexico, a model “that avoids the expulsion of migrants and so that the ones who are deported have real opportunities of jobs and well-being in Mexico.”

It is important that we stop this discourse of hate that has to see with the Mexicans over there [in the U.S.] … It’s good that we go to the United States not only as a government, but as Mexicans.

The migrant wants to stay in the United States, because there he has his life and work, and therefore a strong State is needed.

“…they [the Americans] cannot subsist without those workers that, besides not being paid very well, do the Americans’ most difficult jobs

Pop star economists—what would we do without ‘em?

Shock! Horror! Mexico Reports Us To The UN!

Pack it up lads, it’s all over. Mexico tattled on us in Geneva to the United Nations.

Today Mexico criticized the migratory policy of Donald Trump, President of the United States, who has proposed the construction of a Wall on the border, promoted the migratory veto of refugees and citizens of Muslim majority and has devised a migratory plan to accelerate deportations.

Making this charge was the very white Mexican Miguel Ruiz. He’s the “Undersecretary for Multilateral affairs and Human Rights” so I suppose making these kinds of complaints is all he does.

“Walls between nations are also walls between persons and materialize the extremism and intolerance of physical and ideological barriers that we will not accept under any circumstance.”

This from the same government beating its chest about its sovereign authority to determine who enters its territory.

Upon receiving an award, Portuguese producer Paulo Branco declared: “There is no wall that can stop the artistic phenomena.”

Wow, how original and courageous. Who knew Donald Trump was building a wall to keep out films?