Trump’s executive order “Protecting the Nation from Foreign Terrorist Entry into the United States.” [March 6, 2017] received two setbacks on Wednesday. First, a District Court Judge in Hawaii, Obama appointee Derrick Kahala Watson issued a Temporary Restraining Order (TRO) blocking the order. [Full Text] Secondly, the Ninth Circuit Court of Appeals en banc refused to consider the administration’s appeal of the earlier TRO sought by the State of Washington. This is a new low for the courts. 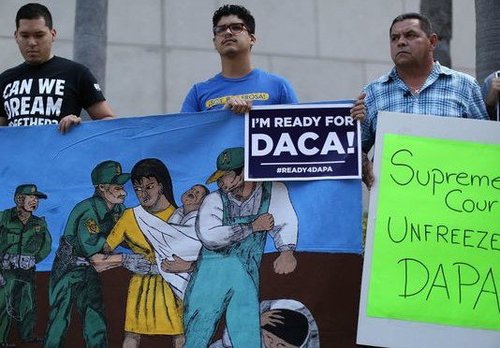 The two most recent major Supreme Court cases on immigration were Arizona v. United States in 2012 and 2016’s United States v. Texas, which dealt with the legality of Arizona’s SB 1070 and President Obama’s Deferred Action for Parents of Americans executive order respectively.  These cases were decided over technical administrative law and preemption doctrines. While I believe immigration patriots had the law on their side in both cases, the issues were complex enough that the other side seemed plausible.

Only a constitutional claim can override such clear legislative authority. However the Plenary Power Doctrine has long held that “an unadmitted and nonresident alien” has “no constitutional right of entry,” as the Court put it in Kleindienst v. Mandel (1972). So long as the government presents a facially “legitimate and bona fide reason for its action” to exclude an alien, courts cannot review the decision.

My Leftist constitutional law and immigration law professors complained about how harsh the Plenary Power Doctrine was, as did the text books. Yet no one suggested this was not the Supreme Court’s precedent.

Nonetheless, Hawaii district court judge Watson does not even address the Plenary Power Doctrine and simply acts as if this was a typical First Amendment or Discrimination case against a U.S. Citizen.  While he acknowledged the order did “not facially discriminate for or against any particular religion,” he insists on looking at the “historical background”—i.e. Trump’s statements—which he deemed to be discriminatory and how the order will effectively limit Muslim immigrants.

This could have enormously broad applications. As the vast majority of legal and illegal immigrants come from the Third World, any restriction will have a “disparate impact” on non-whites. While it is perfectly rational to be concerned about the demographics of new immigrants, other reasons, such as crime, wages, welfare, or the environment are also “legitimate and bona fide.”  Yet if Watson’s decision stands, an activist judge could say “This law disproportionately restricts non-white immigration and Trump has shown a history of racial animus.”

This decision is not surprising given that Watson is an Obama appointee (and Harvard Law classmate.)  Nor is it surprising that when the Ninth Circuit refused to hear the case en banc, not one of the 23 Democratic appointees (along with George W. Bush appointee N. Randy Smith) signed on to the dissent issued by James Bybee and four other Republican-appointed judges.

Donald Trump has treated these judges with the contempt they deserve, tweeting that one was a “so-called judge” and sarcastically asking at his Nashville rally, "You don't think this was done by a judge for political reasons, do you?" [Read President Trump’s Response to the Travel Ban Ruling: It ‘Makes Us Look Weak’, Time, December 15, 2017].

The Ninth  Circuit Judge Stephen Reinhardt  showed how Trump’s tweets got under his skin, along with his grandiose conception of his own importance, by writing,  “I am proud to be a part of this court and a judicial system that is independent and courageous, and that vigorously protects the constitutional rights of all, regardless of the source of any efforts to weaken or diminish them.”

Unfortunately, though not surprisingly, the Republican judges more or less agreed with him. After meticulously showing how the liberals on the court completely ignored the constitution and established precedent, their dissent concluded,

The personal attacks on the distinguished district judge and our colleagues were out of all bounds of civic and persuasive discourse—particularly when they came from the parties. It does no credit to the arguments of the parties to impugn the motives or the competence of the members of this court; ad hominem attacks are not a substitute for effective advocacy. Such personal attacks treat the court as though it were merely a political forum in which bargaining, compromise, and even intimidation are acceptable principles. The courts of law must be more than that, or we are not governed by law at all.

Liberal judges have already turned the court into a “political forum.”  Intimidation is the driving principle in these cases—but it comes from the Main Stream Media, not Trump.  The judges are willing to throw away over a century of established case law out of fear of being called a racist or xenophobe by the New York Times.

Regardless of the ultimate solution to deal with judicial imperialism—be it impeachment, legislatively restricting the judiciary, ending lifetime tenure, etc.—these ideas will remain nothing but conjectures until federal judges get knocked off their pedestal and the MSM loses its moral monopoly.

In this respect, Donald Trump’s tweets have done more to advance the cause of constitutional jurisprudence than the Federalist Society and Heritage Foundation have done over the last thirty-five years.