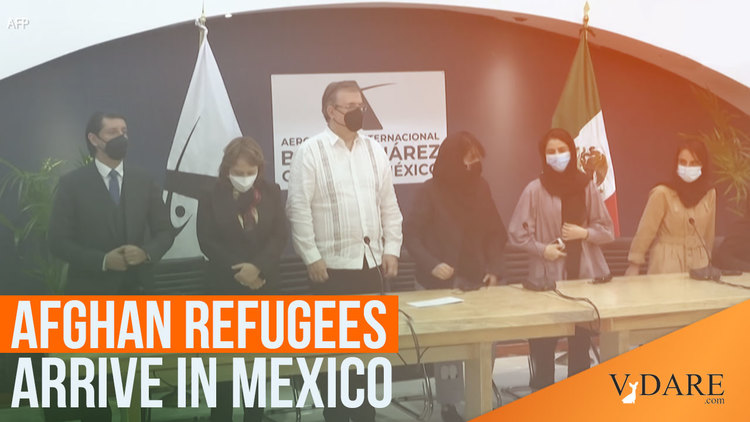 SAID IN SPANISH [FIVE ITEMS]: Afghan Refugees In Mexico; Haitians In Tapachula; Amlo And The Fall Of Tenochtitlan; Migrant Covid Deaths In Mexico

Mexico Takes In Afghan Refugees…Until They Can Get Into The U.S.

If Afghan refugees on the run from the Taliban can’t get to the United States directly, they come indirectly, as so many “refugees” do: through Mexico. 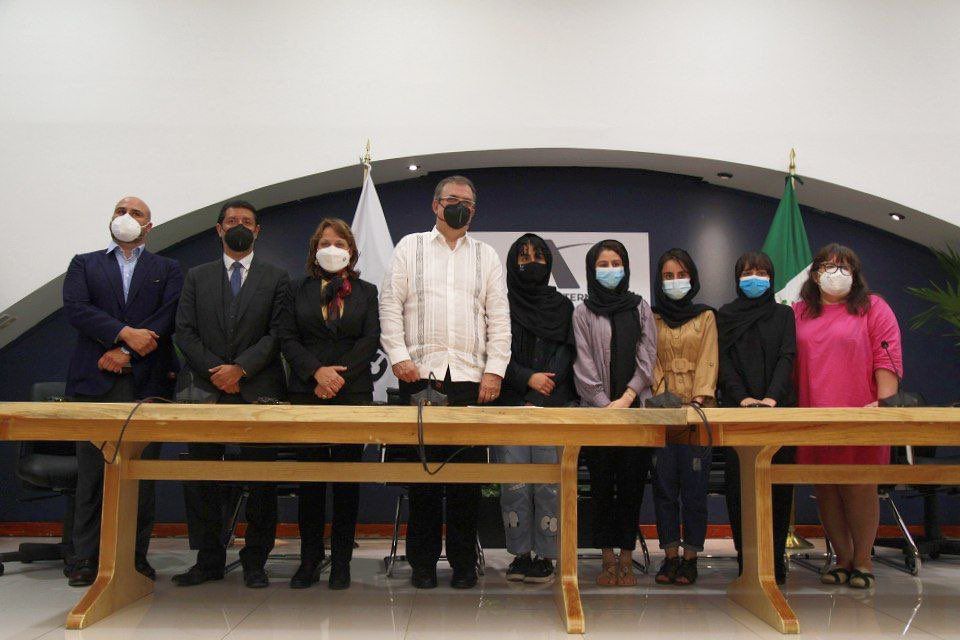 The women are part of the AfghanDreamersTeam, known internationally for the creation of ventilators for COVID-19 patients made from used car parts. The team also received the special prize in the International Robotics Championship, and has been converted into a symbol of the search for human rights for the women of their country.

So Afghans can be DREAMers, too! Who knew?!

Because everyone wore a mask at the event, you couldn’t tell whether the women plan to veil their faces in traditional Islamic fashion.

One woman’s husband arrived, but he didn’t get as much publicity [Mexico welcomes arrival of its 1st group of Afghan refugees, The Associated Press, August 24, 2021].

The journalists, who worked for The Washington Post, The New York Times, and The Wall Street Journal, expect to enter the United States.

“Who knows if they will stay temporarily or permanently in our country?” reported Jorge Fernandez for Excelsior. “The majority are in the process of obtaining visas to live in the United States, but that will be delayed for at least a year” [Periodistas de Afganistán en México (“Journalists from Afghanistan in Mexico”), Undated].

I strongly recommend that these journalists give up the profession if they stay in Mexico. In 2020, eight journalists were killed there, more than in Afghanistan or any other country in the world [Number of journalists killed worldwide in 2020, by country, by Amy Watson, Statista, May 3, 2021].

Down in Tapachula, a city near the border with Guatemala, refugees from a nation closer to the U.S. hope to head north and jump the border.

“[T]here are more than 120,000 migrants stranded in Tapachula, 30,000 of whom are Haitians, according to local authorities,” reported Mileno’s Julio Navarro and Alejandra Zarate. “The number of persons who arrived from Haiti to Mexico with the intention of arriving to the U.S. increased in the last month” [Haitianos, uno de cada 4 migrantes en Tapachula (“Haitians, One of Every 4 Migrants in Tapachula”) August 21, 2021].

The Haitians hope to pull together the money for the trip while they await the trek north.

Meanwhile, they don’t always get along. In early August, the “migrants” battled each other as they tried to force their way into a government refugee office:

In Tapachula, Chiapas, elements of the National Guard are guarding the installations of the offices of the Mexican Commission for Assistance to Refugees (COMAR) and the United Nations High Commission for Refugees (ACNUR) after a fight among Haitian migrants who attempted to enter these installations by force, to obtain appointments for the application to be a refugee in the country. The migrants began to bunch up and push to get a place ahead in the line. There were verbal aggressions and tension, with the result that more than 40 elements of the National Guard had to intervene to guard the place.

Shockingly, the Haitians behave just like Haitians in Haiti.

The locals are not amused. Navarro reports:

[They] have expressed their discontent with the lack of utilization of face masks and sanitary measures among the migrants, besides using the streets as dormitories, public bathrooms and even improvised dining areas, which generate an accumulation of trash and lack of hygiene in the area,”.

AMLO On The 500th Anniversary Of The Fall Of Tenochtitlan

August 13, 2021 was the 500th anniversary of the fall of Tenochtitlan, the Aztec capital, to the Spaniards and their Indian allies. Now, Tenochtitlan is Mexico City.

On a day like today 500 years ago, a troop of Spaniards headed by Hernan Cortes and native allies achieved the surrender of Tenochtitlan in Mexico. Spain achieved the liberation of millions of people from the bloody terror regime of the Aztecs. Proud of our history.

At his inauguration on December 1, 2018, AMLO gave a shout-out to Spanish King Felipe VI, who attended the festivities and was the first head of state who met the new president. AMLO acknowledged the “the bonds of history and culture that unite” Spain and Mexico [Felipe VI, primer líder que recibe López Obrador como presidente de México (“Felipe VI, First Leader Received by Lopez Obrador as President of Mexico”), EFE, December 1, 2018].

But the following March, AMLO wrote to Felipe VI to ask the monarch to apologize for human rights violations visited upon the natives during the conquest. The Leftist Spanish government brushed him off: “The arrival 500 years ago of the Spaniards on territory that is now Mexican,” it said, “cannot be judged in the light of contemporary considerations”

Thus do we have the title of this year’s lament about the arrival of Spanish Christians under Hernan Cortes: “Five Hundred Years of Indigenous Resistance.”

Today, August 13…we remember the fall of the great Tenochtitlan and offer pardon to the victims of the catastrophe originated by the Spanish military occupation of Mesoamerica and the rest of the territory of the current Mexican republic.

Why AMLO offered “pardon” to the victims we don’t know, but he segued into a disquisition about the atrocities suffered by Aztecs and other Mexican Indians.

After confessing that Emperor Montezuma “may have been a tyrant” and that the Aztec empire “was imposed by force,” he claimed that history did not prove the bloodthirsty Mesoamericans were cannibals.

That is utterly false. Pre-Columbian cannibalism is a well-established fact, as Hugh Thomas reported in Conquest: Montezuma, Cortes, and the Fall of Old Mexico.

AMLO ended by condemning the whole concept of conquest, a not terribly-original observation for a Leftist. Then again, would AMLO’s standard apply to the Aztecs’ conquest of other Indians (who saw the Spanish as liberators)?

A more balanced approach would have been to acknowledge the negative aspects of the conquest, but recognize that Mexico wouldn’t exist without it. Mexicans should honor their Indian and Spanish forebears.

He could have put the matter in perspective by quoting the inscription on a monument in Mexico City’s Tlatelolco plaza:

Heroically defended by Cuauhtemoc,
Tlatelolco fell to the power of Hernan Cortes.
It was neither a triumph nor a defeat.
But the painful birth of the mestizo nation that is the Mexico of today.

Ken Salazar Set To Be A Popular Ambassador—But Whose> 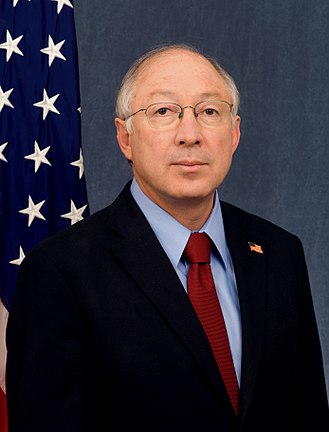 A descendant of Spanish colonists of the Southwest from 400 years ago, Salazar was one of Colorado’s U.S. senators and Barack Hussein Obama’s Secretary of the Interior.

Of course, he received good marks from the Mexican media for being a “defender of the rights of the migrants” and for supporting the  2007 Amnesty attempt when he was in the Senate [Ken Salazar, polémico ecologista y defensor de migrantes despachará en México (“Ken Salazar, Polemic Ecologist and Defender of Migrants to be Dispatched to Mexico”), by Manuel Ocano, Excelsior, August 22, 2021].

Memo to Salazar: An ambassador represents the country that sends him. He doesn’t represent the people in the country to which he is sent.

WuFlu is killing “migrants” traveling through Mexico. More than 2,000 have tested positive; nearly 100 have died:

In Mexico 84 deaths due to COVID-19 have been reported among migrants, equivalent to a 3.63 mortality rate, much higher than countries such as the United States, which reported 25 deaths since the beginning of the pandemic until today. The General Directorate of Epidemiology [DGE, for its initials in Spanish] reported that from 2020 to August 15 of 2021, 11,915 migrants have been examined under suspicion of COVID-19, of which, 19.4%, that is, 2,312, have tested positive and 84 have died.

So plenty of contagious migrants are passing through Mexico on their way to our border.

Of course, we knew that. President Biden has been dumping virus-positive migrants all over Texas:

**NEW**: After an incident at a Whataburger, police in La Joya, TX say they’ve learned illegal immigrants who test positive for COVID-19 are being released from federal custody to a local Catholic charity in the RGV which then places them in local hotels without notice. @FoxNews pic.twitter.com/cOx4yR5Wiw