It’s no surprise that the Mexican political and media elite had plenty to say about Trump’s triumphant convention—but it may be a surprise that, now Trump has won, they are distinctly more reasonable than America’s #NeverTrump neocons, Conservatism Inc., President etc.

Thus the Frentes Políticos [“On the Political Front”] July 20 opinion column in Mexico’s Excelsior newspaper began with this unsubtle statement:

Nightmare. It’s official. Donald Trump, the worst candidate possible for many, was elected by the Republican Party as its representative for the [U.S.] presidency.

The Melania Trump plagiarism non-issue was dealt with by Excelsior’s Yuriria Sierra in an opinion piece creatively entitled (in English)  #LadyCopyPaste [July 20, 2016]. How clever!

Interestingly, in the comments section, a reader calling himself “Juan Lopez” of Mexico City said:

…Did you hear, did you notice, did you pay attention, etc., Mr. Trump is not against Mexicans but against illegal immigration? Don’t be deceived by the Mexican government. Stop this campaign of disinformation…The slanders have only made the candidate…. bigger and more powerful……As Mr. Trump defends his country, let’s see when a Mexican politician emerges who will do the same with us.

Another reader, “Leandro Tatas”, a Mexican who lives on the U.S. side of the border, wrote:

“For those of us who live on the border that wall would help a lot”.

“…it’s a security disaster with the quantity of persons who arrive and they deport and nobody does anything…..Without papers, without money, without known people and with an offer of drugs and alcohol of doubtful quality at their disposal.”

Like the Main Stream Media in the U.S., Excelsior also ran a July 21 piece entitled Critican a simpatizante de Donald Trump por emular saludo nazi [“Donald Trump sympathizer criticized for emulating a Nazi salute”] of speaker Laura Ingraham with her right arm out, which of course is supposed to look like a Nazi salute. 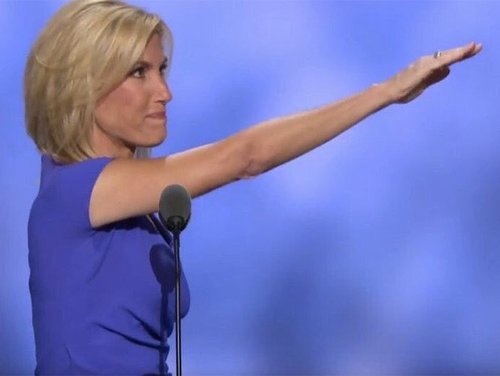 At least the article did provide some context—Laura was really just moving her arm around.

On her twitter feed, she hit back hard by sharing  photos of Hillary making a similar gesture.

But Mexicans, of all people, can’t get bent out of shape about this. After all, the Mexican flag salute looks like a “Nazi salute” too. 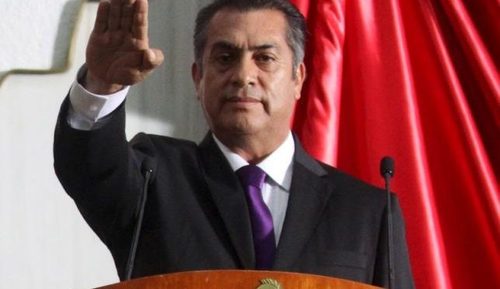 (Right, the Governor of a Mexican state takes the oath of office.)It’s called the “Bellamy Salute” or the “Roman Salute”. For that matter, until it was changed in 1942, the American flag salute resembled the “Nazi Salute”. In that year it was changed so as not to resemble it. As I reported recently, my dad remembers doing that salute when he was in school in Oklahoma.

So what’s the big deal? It’s simply that, as VDARE.com’s James Fulford has written, any conservative politician who raises his arm above his shoulder will have pictures like this published by the MSM. That’s why it’s being called the Lying Press.

MEXICAN AMBASSADOR SADA GETS IN ON IT

Mexican ambassador Carlos Sada was actually in Cleveland during the GOP convention. He attended several meetings. On July 18, there was a meeting of ambassadors presided over by New Jersey Governor Chris Christie. (Why?). Also on July 18, Sada met with Ohio Governor John Kasich who loves mass immigration.  On July 19, Sada attended a meeting of the National Association of Latino Elected and Appointed Officials [NALEO].

That of course brings up two pertinent questions:

At the NALEO conference, called a “briefing”, Ambassador Sada was unhappy about Trump’s comments about Mexican illegal alien criminals when he began his campaign thirteen months ago. [Mexican ambassador deplores “insults” in Trump’s campaign  Universal, July 19, 2016. ]

Hey, if you’re not a criminal, why would you be insulted by that?

“When you are insulted, there is a reaction, and we Mexicans have been insulted,” whined Sada.

After that, Ambassador Sada made this bold proclamation:

Thank you, Ambassador Sada, for pointing out yet another advantage of the border wall! It would be prudent to have a clear separation line between the U.S. and Latin America. Don’t forget that there are plenty of non-Mexican Latin Americans crossing the border these days.

By definition, a border is a division. That’s its purpose. And good fences make good neighbors.

Also in attendance at NALEO: Puerto Rico’s former governor Luis Fortuno [Email him] currently flourishing in Washington, D.C. as a partner with the Steptoe and Johnson law firm. Fortuno is a member of two political parties: the GOP and Puerto Rico’s New Progressive Party (PNP).

According to a report, Ambassador Sada angrily addressed a question to Fortuno: “How do you all [U.S. Latinos] plan to change the message, because we [Mexicans] are also sensitive?” [México expresa en Cleveland su malestar por Trump (In Cleveland, Mexico Expresses Its Discontent Over Trump) by Luis Alonso Lugo, AP, July 19, 2016]

Cravenly, RINO Fortuno replied by expressing his feelings of embarrassment/shame over some of Trump’s statements and said he hoped the Trump Team would modify its message. (He did point out that the working class feels excluded from the benefits of globalization).

But on the day after Trump’s acceptance speech, Mexican President Enrique Pena Nieto paid a visit to President Barack Obama in Washington D.C.

In the not-so-distant past, Pena Nieto likened Trump to Mussolini and Hitler. But now he was downright statesmanlike: "To Mrs. Hillary Clinton and Mr. Donald Trump, I want to express my highest respect.”

The Mexican president pledged a “frank and open dialogue” with whichever candidate is elected.

But our own President Obama couldn’t leave it there:

Obama was more critical of Trump than his Mexican counterpart, saying that "a cooperative Mexico" with a "healthy economy" is going to "do a lot more to solve any migration crisis or drug trafficking problem than a wall" on the border.

He also slammed Trump's speech this Thursday at the Republican National Convention, where the magnate said that in the U.S., tens of thousands of "illegal immigrants with criminal records...are tonight roaming free to threaten peaceful citizens."

The president countered Trump's assertion by saying that the "facts" show the numbers of violent crimes and illegal immigrants in the U.S. to be the lowest in decades.

He also added that "globalization is a fact...and we're not going to be able to build a wall around that."

Obviously, Obama is going to use his bully pulpit to resist the Trump Train to the bitter end.

But the Mexican government sees that a Trump Triumph is a real possibility.