Back To School 2014: Ryan Andrews On THE BIRTH OF PRUDENCE 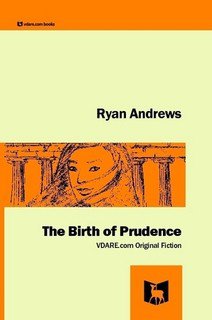 See also: Back To School…Or Dropping Out, In the Case Of America’s Cultural Marxist-Controlled Colleges, by Nathan Doyle; Memo From Middle America | Back To School—And Lots Of Exciting New Problems Imported By Immigration Policy! by Allan Wall.

VDARE.com Editor Peter Brimelow writes: Back to School! To celebrate the seasonal passing of America’s young under the Ed Complex’s yoke, we post this self-interview by Ryan Andrews (email him), author of The Birth Of Prudence, VDARE.com Books’ first work of fiction, a college novel set at the University of Chicago.

The miracle of the internet has made possible the publication of much Politically Incorrect material that would not have made it past the gatekeepers twenty years ago. But I must admit that I would not have had the nerve to publish a novel, except for the passionate support The Birth Of Prudence received from a member of the VDARE.com family, and the fact that I really believe Pat Buchanan is right, as Ryan Andrews notes below, to say “The politics follows the culture.”

The tragedy of Mark [white American] and Prudence [Korean-American] takes place within the tragedy of the West. And so it challenges readers who claim to believe in the West, whether they really mean it and are willing to be true to themselves and their ideals in the way they live their lives. It’s a sobering question, even an offensive one, to patriots accustomed to concealing their beliefs out of fear.

For that reason, The Birth of Prudence is an important book, touching on relationships, race, and above all, identity. It speaks to a generation that has lost its birthright, especially young men who are thrown into the swamp that the Main Stream Media calls a culture, tossed a weight called “white privilege,” and ordered to swim for their lives. To them, The Birth of Prudence throws a desperately-needed life preserver.

Q: Is this book a warning to whites against interracial romance?

A: It’s not really that such an interpretation is flat wrong, it just misses the larger point. The story of Mark, a white American, and Prudence, a Korean American, is a very specific tragedy, one which is made possible by the larger tragedy of the West. It is true that the story’s conflict depends on the two main characters being an interracial couple, but that is the extent of it; they are an interracial couple because this condition is necessary to tell the story, not because that is the story.

If this book is a warning to whites, it is warning against the current transformation of their historic nations into interracial societies, not interracial dating. The former may imply the latter, of course, but the attention here is all on the former.

Q: I’m more of a political sort of person, and don’t have much use for literature. Why should I read this book?

Besides, if you understand politics as essentially a contest of moral visions, there is a lot here that should interest you.

A: The novel is divided into three parts: Part One; Universalism vs. Nationalism; and Part Two.

Parts One and Two tell the story of Mark and Prudence. At around the book’s midpoint though, there is a break in the action, and the scene shifts to an extended late-night dorm-room argument between roommates Logan and Ethan. Ethan argues the Ethno-Nationalist position, and Logan takes the side that I call Egalitarian Universalism. Our sympathies are undoubtedly with Ethan, but Logan is not a straw man; he has his say, and he says it well.

The long-term success of our position depends on establishing and defining it as a moral ideal that is attractive. We cannot just rely on convincing people that the other side’s ideas simply do not work, nor will we win by positioning ourselves in contrast to the stupid or hateful elements of the Left. Both of these methods have their place, of course, but we cannot depend on them. Point out the stupidity, or impracticality, or ugliness of this or that portion of the Left, and people will just say to themselves: “Well, that’s not my vision of the Left/Universalism.”

So, even if literature is not your thing, I devote almost one-third of the book to this crucial task.

Q: Well, that sounds promising, but aside from both having a racial theme, how is this section related to the rest of the book? Or is it just something you wanted to say?

A: It is part of the story of Mark and Prudence, or rather, they are part of the larger story of the West that the debate attempts to explain. The function of Ethan and Logan is like that of the chorus in Greek tragedy, except their commentary is not on the immediate story, but the setting in which that story takes place.

Universalism vs Nationalism is a less-clumsy heading, but the Debate section could just as accurately be titled: “Should Western Countries Allow Large-Scale Non-White Immigration?”

That question is the compass throughout the argument, but there are three overlapping sub-topics:

The first of these sub-topics relates to the novel’s immediate story in that it attempts to explain the historical forces and contemporary societal scene (the story is set in late 90s Chicago) that has produced the setting in which Mark and Prudence’s romance takes place.

Ethan’s short college paper on the universalist ethos of late-nineteenth century European imperialism, and our journey from then to now, which is the novel’s prologue, is also a part of this effort to explain the novel’s setting.

Here is the second paragraph from my original proposal to VDARE.com. Aside from Logan’s language being more grandiloquent than usual, it offers a pretty good idea of the nature of their argument during this first portion of the debate. I wrote:

I believe that the ultimate achievement awaiting humanity, and the implicit ethos of Western civilization, is the elimination of the concept of ‘the other.’...

“Now, since the Enlightenment, we’ve been working toward one end: the universality of our universal values. It’s the dominant spirit of the modern age, what Christianity was for the Middle- Ages, and what the discovery of man was for the Greeks.”

So explains University of Chicago student Logan Benson, an enthusiastic Universalist. In response, his roommate, Ethan, argues that multiculturalism—a tragic by-product of the Western quest for oneness —is much more than a minor bump along the way, and is actually a mortal threat to the Western way, meanwhile, majority culture is degraded to a bland non-culture. He also maintains that the current faith in racial interchangeability is a classic case of the disconnect between the human spirit and the reality of human limitations.

Ethan: “My idea is that societies should be ethnic entities because, well, because I wish to see the extended families recognize themselves as such, and to survive and reproduce, which is the sole goal of all life. That is enough for me right there. But I also believe in the idea of a biologically-specific Good...

Not only that, it seems also that the relative value each group places in each sphere matches their relative ability. The straitjacket of your universalist ideology has deformed us somewhat, but even still, we continue to value what we are. But now, don’t go and trade your man-boy idealism for man-boy practicality, and say, ‘hmm, that’s why multiracialism is so good; we can get our athletes from there, our thinkers from there, and we’ll be the best at everything.’ Group x may have more who can run fast, group y more who can think fast, but each group has both runners and thinkers, and has uses for them. Uses which, owing to the multitude of subtle racial differences, will differ from group to group. And so these differences in degree interact to become not a matter of difference in quality, but in kind.”

Logan offers many surprisingly skillful attacks at this idea, and like Ethan, we will have to grapple with those.

Race-realist ideas influence the other sub-topics, and are the necessary hinge between the two.

Q: Does this book argue that all non-whites are genetically incapable of truly ascribing to “Western Values?”

A: Of course not. If it is possible for an individual, as opposed to a society, to be “truly Western,” then Prudence, the Korean-American title character, is absolutely such a person, at least in terms of her ideological outlook. It is not as if she has made some shallow calculation that because the West ‘works better,’ it is the most rational candidate for her loyalty; she is a deeply sincere Western humanist.

Prudence’s most core belief, a bluntly-conceived notion of the superiority of the man of “deep-feeling,” is a direct result of her humanistic studies. Her Eurocentrism (for her, not at all racial) and especially her ideology which flows from it, are central to understanding her psyche (hint: the flowery one-and-a-half page essay on the glory of Greece, written by Prudence at age 15, is not there to instruct the reader on Ancient Greek society).

Q: Another essay? How many essays are in this darn thing?

A: Just the two. And like I said, they are not very long; suck it up.

Besides, I thought you said you were more into politics than literature anyways?

Buy The Birth Of Prudence in either here in Paperback, or here as a Kindle Edition.Email Ryan Andrews.