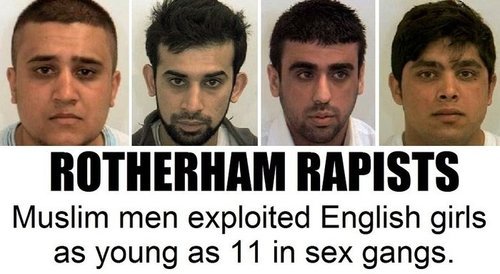 Back in April, the Islamic Boko Haram organization in the backwoods of Nigeria kidnapped 276 local black Christian schoolgirls and threatened to sell them as wives and/or sex slaves. This became a vast global story with the great and good all over the world weighing in to demonstrate their concern.

So far all this awareness raising hasn’t, actually, helped — some girls subsequently escaped, but 217 are still unaccounted for. But that’s not the point, the point is that Awareness Was Raised, and, more importantly, that numerous celebrities were seen engaging in Raising Awareness so that your awareness of their awareness has been raised.

In contrast, for many years in England, Pakistani pimps have been luring pubescent white Christian girls into sexual slavery; but the English Establishment — police, political, and media — responded with a long Awareness Lowering campaign. In the first decade of the 21st Century, those who protested were ignored, censored, or sent to diversity sensitivity training. The most prominent politician to take up the case a decade ago, Nick Griffin of the BNP, was put on trial twice for inciting racial hatred (but juries did not convict him).

… As for the Pakistani Muslims themselves, well…look, I like Steve Sailer quite a bit when it comes to issues of race, IQ, and demographics but his analysis of Islamic ideology is quite lacking. This really is one of those cases where someone like Timothy Furnish or Robert Spencer>Steve Sailer. Why? Because Sex Slavery is explicitly sanctioned in the Quran.

Don’t believe me? Take it from the Quran;

Quran 4:24 Al-Nisa(Women): And also forbidden to you are all married women (muhsanat) except those women whom your right hands have come to possess (as a result of war). This is Allah’s decree and it is binding upon you.”

And in case you don’t think the Quran’s rulings are applicable in the present day, here’s very popular and oft cited Pakistani jurist/theologian Abul A’la Maududi (died 1979) talking about his ideal state (you might not have heard of him, his Jaamati followers in the UK Islamic Mission are the largest component of the Muslim Council of Britain):

“Many misunderstandings seem to persist about the right to have sexual relations with one’s slave-girls. It is pertinent to call attention to the following regulations of Islam:

“Islam does not permit soldiers of the Islamic army to have sexual relations with women they capture in war. Islamic Law requires that such women should first be handed over to the government, which then has the right to decide what should be done with them. It may either set them free unconditionally, release them on payment of ransom, exchange them for Muslim prisoners of war held by the enemy or distribute them among the soldiers. A soldier may have sexual relations only with that woman who has been entrusted to him by the government.”

I would be willing to bet that most, if not all of those Pakistani Muslims involved in these crimes had heard Maududi’s teachings (& many others) in one form or another. Even if they weren’t aware of Maududi in some way, there are plenty of other prominent and influential Muslim religious leader who proclaim something similar like the Grand Mufti of Saudi Arabia, Sheik Abdul-Aziz ibn Abdullah Al-ash Shayekh who believes that marrying and then having sex with 10 year olds is acceptable in Islam….10 year olds, Dude…Of course, there’s also prominent Saudi scholar Saleh Al-Fawzan who has declared that slavery is very much a part of Islam and those who proclaim otherwise really have no basis for their claims…

Just sayin’…By their fruits shall ye know them…

Feminist Susan Brownmiller famously said in 1975 that rape is not a crime of eroticism but of power. Of course, it’s much more complicated than that, but Brownmiller did have a point.

Of course, Feminism Inc. has been remarkably out to lunch for the last decade on the crisis of white Christian girls being lured into sexual slavery by Muslim pimps in England.