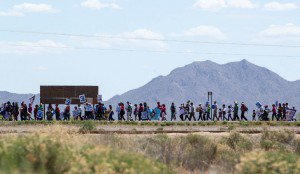 Hispanics Rally Near The Border For An End To Deportations

The Obama Regime Administrative Amnesty is expanding again—and alleged law enforcement officials are helping the President break the law to inundate Americans with criminal illegal aliens and even terrorist supporters. This time, Obama’s Minority Occupation Government is working with various bureaucracies to halt deportations, release criminal aliens, and even delete Department of Homeland Security records so anti-American extremists can be allowed into the country.

The Executive Office for Immigration Review (EOIR), the “immigration court” that presides over deportation hearings, is engaged in kabuki theater with the Obama Regime. The Regime is bringing fewer deportation cases before the EOIR—and the EOIR is dismissing more of those that are brought.

New deportation cases brought by the Obama administration in the nation’s immigration courts have been declining steadily since 2009, and judges have increasingly ruled against deportations, leading to a 43 percent drop in the number of deportations through the courts in the last five years, according to Justice Department statistics released on Wednesday.

The figures show that the administration opened 26 percent fewer deportation cases in the courts last year than in 2009. In 2013, immigration judges ordered deportations in 105,064 cases nationwide.

NYTer Preston finally concedes what VDARE.com has repeatedly pointed out—Obama is not a “Deporter-in-Chief” but a critical figure in the collapse of American immigration enforcement:

The number of deportations ordered by immigration courts is only a portion of total deportations in a given year. But the lower numbers from the courts contributed to a drop in overall deportations last year, when enforcement agents made 368,644 removals, a 10 percent decrease from 2012. Also, some deportations that judges order — for example, if the foreigner becomes a fugitive — may not be carried out.

But even with the reduction in deportation, the bureaucracy is still plagued by a backlog.

More ominously, government prosecutors who are supposed to be arguing for deportations are now actually working with the EOIR to ensure more illegals remain in the country.

Deportations were further reduced by a big increase since 2011 in cases that were suspended, often by agreement between Homeland Security prosecutors and judges. Under the prosecutorial discretion policy, administration officials said they would offer suspensions to clear the court docket of low-priority cases involving immigrants with no criminal records who had families in the United States.

In other words, a bureaucracy designed to enforce the law is unilaterally deciding to abandon it. The inevitable result: more illegals are encouraged to fight their cases in court, further clogging up the system—leading to more backlog, and thus even fewer deportations:

…more immigrants are seeking lawyers and fighting deportations, leading to longer and more complex cases for immigration judges to weigh…

The figures do reveal that more of them are battling their cases and going to court with lawyers versed in the intricacies of immigration law, which Mr. [Juan] Osuna [director of the office that runs the immigration court system] hailed as a positive trend for the system. In 2013, 59 percent of cases involved lawyers, compared with 35 percent in 2009.

Even more outrageous, because of the Obama Regime abandoning enforcement against what it alleges are “low risk” illegal aliens, these EOIR proceedings are by definition more likely to involve dangerous criminal aliens and national security threats.

Not satisfied with sabotaging immigration law enforcement, the Obama Regime has also released 36,007 immigrants convinced of nearly 88,000 crimes, including homicide and sexual assault.

Immigrations and Customs Enforcement (ICE) spokesperson Barbara Gonzales has claimed these releases were required by a Supreme Court decision.

“In some of the releases in 2013, ICE was required by law to release the individuals from custody, pursuant to decisions by the Supreme Court and other federal courts,” Gonzales explained.

“The releases required by court decisions account for a disproportionate number of the serious crimes listed in the report,” she continued. “For example, mandatory releases account for over 75 percent of the homicides listed...”

The Supreme Court case Zadvydas v. Davis prevents the government from indefinitely holding immigrants who are not likely to be removed in the near future — for example if their home country will not take them back.

According to ICE, in those circumstance, Zadvydas often results in ICE releasing such detainees after 180 days —- regardless of their criminal history.

Gonzales noted that the other releases were a “discretionary matter.”

“Others, typically those with less serious offenses, were released as a discretionary matter after career law enforcement officers made a judgment regarding the priority of holding the individual, given ICE’s resources, and prioritizing the detention and removal of individuals who pose a risk to public safety or national security,” she added.

And the Supreme Court is not God revealing the Ten Commandments. Congress could, and should, overrule it by statute. [Reining in Zadvydas v. Davis, by Jon Feere, CIS, May 2011]

In fact, outrageously, there is already a sanction enacted into law to punish countries that refuse to repatriate their illegal aliens. Title 8 United States Code §1253(d), Penalties Related To Removal bans the issuing of U.S. immigrant and non-immigrant visas to nationals of these countries.

But instead of doing this, through bureaucratic legerdemain and non-feasance, the Regime is allowing criminal aliens to remain in the United States.

The Department of Homeland Security (DHS) secretly assembled a terrorist “hands off” list that permitted individuals with terrorist ties unfettered entrance into the United States, according to document released by Sen. Chuck Grassley (R., Iowa).

The existence of a “hands off” list that permitted easy entrance for suspect individuals into the United States has drawn concern from Grassley, who released a cache of internal DHS emails detailing the list’s existence and discussion about permitting an alleged member of the Muslim Brotherhood to enter the United States…

While the individual in question is not named in the heavily redacted emails, the Washington Free Beacon has learned that the person referenced is Jamal Badawi, a Canadian Islamist leader who has praised suicide bombing and is close to Hamas and Hezbollah…

Incredibly, Kredo reports, the Regime has been destroying evidence of terrorist connections:

Additionally, the emails reveal a larger campaign by DHS and its former head Janet Napolitano to purge internal records of hundreds of terror suspects, including Badawi, who had his records purged in December 2010.

Sources who spoke to the Free Beacon and had reviewed unredacted versions of the emails indicated that many files pertaining to foreign terror suspects may have been purged by DHS.

And if the Obama Regime was deliberately trying to endanger Americans, what would it do differently?

Americans must face the fact: this mass influx of criminal aliens and terrorists into the U.S. isn’t policy failure—it’s policy.