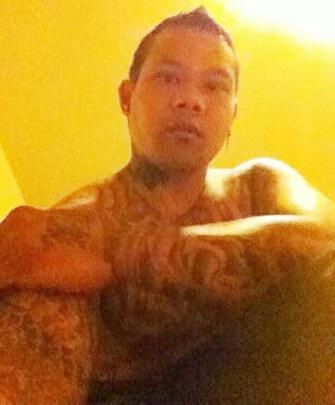 Accused killer of four Ka Pasasouk (pictured in all his tatooed glory) is a double example of how government no longer protects public safety.

In the first place, Pasasouk has a long rap sheet of crimes including methamphetamine possession, unlawfully taking a vehicle, robbery and assault. Yet this clearly dangerous man had been released early from incarceration under a California law designed to ease crowding in state prisons. Governor Brown promised that the new policy of early release and moving prisoners to local jails would not endanger the public, but results prove otherwise.

Likewise concerning is how Pasasouk was not deported, but was released into American society because his home country, Laos, would not accept him.

There are thousands of cases where dangerous foreign criminals are released in this country because of a Supreme Court decision limiting the time a pre-deportation thug may be held to six months. One recent count is 8500. Congressman Ted Poe has written a bill to facilitate the deportation of foreign criminals by withholding visas, which has not yet passed. It would help if Hillary Clinton’s State Department were tougher on irresponsible nations, but that is unlikely.

The headline on the following story is unclear, to say the least, but the Supreme Court cause is explained midway.

The suspected shooter in a Northridge quadruple homicide, Ka Pasasouk, was ordered deported to his native Laos six years ago, but it fell through when needed travel documents could not be obtained, according to U.S. Immigration and Customs Enforcement (ICE).

Pasasouk has a history of felony convictions that date back at least as far as 2006. Since his most recent arrest in Las Vegas on Monday, Pasasouk has waived extradition and will be returned to Los Angeles to face murder charges in connection with four slayings outside a Northridge boarding house on Dec. 2.

In 2006, a federal immigration judge ordered Pasasouk deported “based upon his criminal history,” according to a statement issued by ICE,in response to an inquiry by NBC4. At the time, Pasasouk had been convicted for felony assault and second-degree robbery.

In 2008, after Pasasouk was released from California State Prison, ICE “took Pasasouk into custody, but was unable to obtain travel documents to facilitate his removal,” according to ICE.

A Supreme Court ruling in the case of Zadvydas v. Davis in effect set a time limit of 180 days for deportation orders to be carried out. For Pasasouk, that meant his release.

Pasasouk was again sent to state prison in 2010 after conviction for “unlawful taking of a vehicle.” He was released this past January and placed under the supervision of the Los Angeles County Probation Department.

In September, Pasasouk faced a charge of illegal possession of methamphetamines. The probation department report to the court recommended Pasasouk be returned to prison. But the District Attorney’s office negotiated an agreement whereby Pasasouk would plead no contest and be placed in a drug diversion program.

Judge Jessica Silvers approved the agreement, and Pasasouk was released, once again with the requirement he report to the probation department.

On Nov. 14, Judge Silvers issued a bench warrant for Pasasouk when he failed to appear on time to show proof of progress. He did appear later in the day, and the warrant was withdrawn.

Pasasouk still failed to report to his probation officer, and the department initiated the process to obtain a warrant. The paperwork was completed the day prior to the Northridge homicides, according to Bingham.

ICE never took Pasasouk back into custody “since the agency still had no reasonable expectation of being able to carry out the court-issued removal order,” according to ICE.

Deportation to Laos historically has been problematic, ICE contends. During fiscal year 2012, the federal government was able to obtain only one travel document from the Laotian government, ICE reported.