In Arizona, open-borders extremists have escalated their tactics from noisy rallies to physical confrontation with law enforcement. By blocking deportation buses, they have told the President that they do not recognize American sovereignty or the rule of law, and they demand that he act according to their radical aim to end immigration enforcement.

Below, amnesty pests chained themselves to deportation buses in Tucson, October 11. Operation Streamline has been one of the most effective enforcement programs. 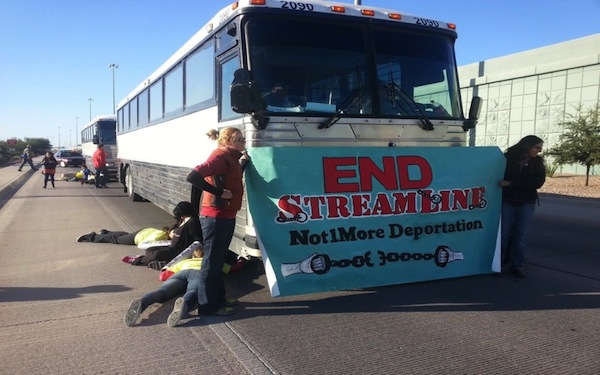 The language of the activists, e.g. “to put our bodies on the line,” is that of revolutionaries, not of concerned citizens.

A group of immigrant advocates in Tucson, Ariz. decided on Friday to try to take immigration laws into their own hands, vowing to stop deportations for a day by stopping a bus carrying detainees and blocking people from entering the parking lot of the federal courthouse.

It was the latest protest by advocates in Tucson, who are rallying against the record number of immigrants deported under President Barack Obama’s administration. About 1.5 million people were deported under Obama’s first term in office from 2008 to 2012 – including an unprecedented 409,849 last year.

On Friday, a dozen demonstrators used chains and pipes to lock themselves to the wheels of a bus carrying immigrants to court.

Another group of demonstrators in Tucson fastened themselves to the entrance of the federal courthouse parking lot to prevent drivers from entering. According to the Arizona Daily Star, nearly half of all criminal defendants and 97 percent of petty-offense defendants in the state’s federal courts are prosecuted for immigration violations.

“The end goal is to stop streamline for a day,” Ella Magon of the community group Tierra Libertad told the Daily Star.

Friday’s protest follows one on Tuesday where a human chain of protesters surrounded a Border Patrol vehicle after two day laborers were stopped by police following a traffic violation. That protest turned violent, and police used pepper spray to disperse the crowd.

Immigration activists in Phoenix are also planning a march on Monday aimed at trying to shut down the U.S. Immigration and Customs Enforcement office in Phoenix. The agency is responsible for arresting and deporting undocumented immigrants.

Carlos Garcia of Puente Arizona, an advocacy group, said organizers are hoping to attract several hundred people at the protest – and he acknowledged some may end up arrested.

“Our community’s prepared to do whatever we have to do… if we have to put our bodies on the line, we will do that, but we’re not allowing for this office to deport anyone else from our community,” Garcia said. “This president’s about to reach two million people deported in his during his presidency – that’s 1,100 people in our community that are being separated every day. We’re going to stop that next Monday.”

Most immigration proceedings are on hold during the federal government shutdown but deportations are continuing.